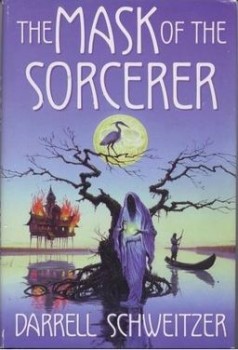 I read a lot of fantasy — most of it older works — and yet Darrell Schweitzer’s mesmerizing The Mask of the Sorcerer (1995) had escaped my attention until fairly recently. Around the time I reviewed another of Schweitzer’s books, Echoes of the Goddess (2013), John Fultz told me that if I was looking for something really wild, Mask was where to go, so I bought it. And for two years it sat there on the virtual TBR stack. When John (who described it as “Harry Potter in Hell” and wrote an appreciation of Schweitzer here at Black Gate ten years ago) and others recently recommended it as a work of S&S horror, I finally picked it up. I have read some extraordinary novels this year, several of which I will positively reread in the years to come. The Mask of the Sorcerer (MotS) is one of those.

MotS is about the education of sixteen-year-old sorcerer, Sekenre. In a land inspired by ancient Egypt, he learns that magic and sorcery are two very different things:

Sorcery is not magic. Do not confuse the two. Magic comes from the gods. The magician is merely the instrument. Magic passes through him like breath through a reed pipe. Magic can heal. It can satisfy. It is like a candle in the darkness. Sorcery, however, resides in the sorcerer. It is like a blazing sun.

Sorcerers draw on deep forces, often by evil means. When one sorcerer kills another, the killer absorbs his victim’s soul and knowledge. There’s a cumulative effect to this, so one victory can yield the spirits of dozens of previously defeated opponents.

Sorcerers are immortal, frozen forever at the age they first gained their powers. Sekenre is sixteen when the book begins, and despite the passing of many decades, still looks that age at its end.

When young scribe Sekenre is marked by the crocodile-headed evatim, messengers of Surat-Kemad, the god of the Great River and of death, he is fated to become a sorcerer. A visit to the Sybil who lives in a great nest of flotsam and bones under the pilings that support the City of the Reeds confirms this.

Son of the greatest and most feared sorcerer, Sekenre wants to be left alone to continue his studies as a scribe, and spend his days creating illuminated manuscripts. This is not to be.

In an act of vengeance and self-preservation he kills a mighty sorcerer and finds himself possessed of many powerful sorcerers’ souls. Sekenre understands that he must learn to use his powers in order to survive the inevitable attacks of other sorcerers. A fundamentally good person, the question of how he will use them is at the heart of the story.

“Father,” I said impatiently, a little angrily, “my problem is simply this: Is it possible to become a sorcerer without also becoming an abomination? Answer me that, Father.” 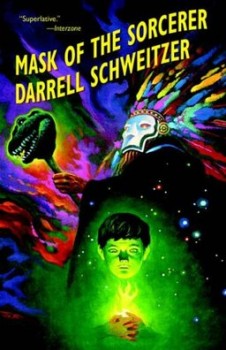 The quest for his answer will lead Sekenre to the realms of dream and of the dead, and finally to the College of Shadows. Only there can a sorcerer begin to understand and fully exploit his powers. Before he gets there, Sekenre must first survive the attacks of his hometown’s citizens, a dead man cursed to harry his wife to her death, and run-ins with several other sorcerers, hideously majestic in the depths of their evil.

The college is no fairytale castle reached by a picturesque locomotive, but a place of unmappable and ever-changing rooms. Graduation comes only when the student kills another sorcerer. No one student ever learns the same way as another. Of the sorcerers inside Sekenre, one spent his time at the school wandering a dark forest where unseen speakers tutored him. Another drifted in a small boat on a foggy lake while others “congregated around him.”

Even getting past the school’s gatekeeper, a woman dressed in bits and pieces of the sorcerers she’s defeated, is a battle:

She laughed once more. “Kill you? I could have killed you any time, stupid Sekenre. But I didn’t choose to. Do you think I just murder people? I’m not like you, Sekenre. I am one person. I wear as many as I like, but I don’t let them become part of me the way you do. They’re all alive. I never kill anyone. So I’ll have plenty of time to make you tell me all your secrets, beginning with your true name.”

“You could hurt quite a lot, Sekenre. You might feel more pain than you ever thought possible.”

Sekenre survives and continues to try and discover if he can avoid becoming evil like his father and the other sorcerers he meets throughout his travels and education. Even when he finds himself unable to confront other sorcerers with anything but a degree of violence he abhors, he manages, believably, to maintain his youthful rectitude. He doesn’t change; instead maturing, coming to a deeper understanding of the cost of actions and the price of temptations.

Schweitzer is a master of building worlds through little touches. At one point Sekenre recalls a venture he and his friend, like generations of boys before them, took into the swamps around their town to carve their initials in a great wooden head of some long forgotten king from the far distant past. Small things like this have the smell of real life, and without it ever seeming forced or too clever, Schweitzer fills his book with similar bits and pieces that help build a culture and land that read true.

All his descriptions of sorcery, and the excursions into the lands of dreams and of the dead, serve as reminders that there are no budget constraints in writing. Schweitzer is a master at creating otherworldly landscapes awash in strangeness. While he writes without the ornate prose of Clark Ashton Smith, his lands beyond the waking world are as deeply weird and resonant. MotS is the filled with the substance of dreams and nightmares. 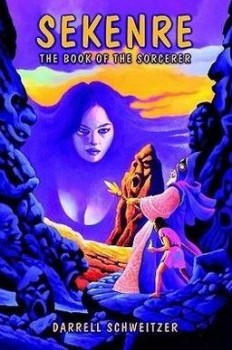 I am doing insufficient justice to The Mask of the Sorcerer. The story is presented as the book Sekenre writes in order to be able to remember his family, his youth, and what he did between the past and now. His voice is rich and expressive as he reflects back on his long-gone childhood. The sorrow he expresses never feels unearned. As successfully as he builds the fantasy of the world, Schweitzer builds the inner-life of his protagonist, paragraph by paragraph, creating someone with whom the reader comes to really care for.

The book is subtitled, “An Epic Fantasy.” This is not true. What it is, is the exploration of a boy’s growth into power and maturity, written with real emotional depth. If that sounds too saccharine or simple for you, just remember, it’s got crazy monsters, terrible sorcerers, and a giant crocodile god of death in it as well, and is as creepy as all get-out.

Schweitzer wrote several short stories about Sekenre. They were published together as Sekenre: The Book of the Sorcerer (2004). It’s not available as an e-book.

NOTE: The genesis of The Mask of the Sorcerer was in Schweitzer’s failed Conan novel. As he set it in Stygia, Robert E. Howard’s Egypt analogue, Schweitzer did a load of research on the Egyptian religion and afterlife. When the book was rejected, he salvaged the research and used it as the basis for Sekenre’s world.

Read MOTS this year. It was dope!!!