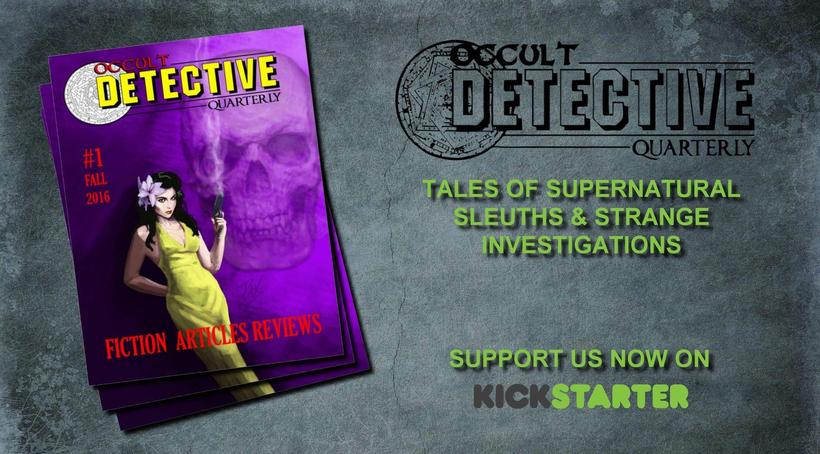 I was always a Carnacki man, staunch and true. An Edwardian adventurer, willing to admit that I was afraid, but determined to stiffen that lip and see the game through. And as a follower of William Hope Hodgson’s Carnacki the Ghostfinder, I quickly took to games like Call of Cthulhu when it first came out in the eighties. The dedicated investigator pitted against almost indescribable horrors had an obvious appeal. It turned out to be a shock, because unlike our usual, intriguing fantasy RPG campaigns, in CoC we died a lot. A real lot. We were, generally, doomed.

So when we decided that we would launch a new magazine, Occult Detective Quarterly, we knew what we wanted. Someone even suggested that Doomed Meddler Quarterly would be a good alternative name. We wanted tales of psychic detectives, amateur supernatural sleuths, embittered foes of the Dark, and people who ended up having to investigate malevolent forces against their wills. New Lovecraftian terror was welcome, as was old-fashioned pluck. Stories from Carnacki to Constantine, with terrified innocents thrown in along the way.

We held an open call for stories over the Summer, and we even received quite a few tales where the protagonist didn’t die, not yet. He or she survived with a modicum of sanity, which counts as a major victory in this sort of area. Not only did we get stories from people unknown to us, but tales from seasoned fantasy and weird fiction authors.

Classic monsters re-imagined; a decidedly non-human private eye; a determined period lady poking her nose in, and a hard-bitten professional who thought he’d seen it all. From Baron Samedi to a sarcastic young woman with a bloody big gun, characters we had to have. Here’s a taste from a story of my own, published elsewhere, to give you the feel:

The woman placed her hands on Hill’s chest, pushing him down onto the mattress. She tore the shirt aside, above where the ropes bound his arms to his torso, and her fingers touched bare flesh. Mr Dry smelled chloroform, but did not look away from the jerking body.

“Stinking mouths, all sores and sharpnesses… ngh… gaping holes, all wet for using –”

Dodgson pressed a cloth pad to Hill’s nose, holding one shoulder down. The jerking lessened, but did not cease entirely.

Hill bit at the chloroform pad, but Dodgson was too strong to let him rise. The sickly sweet odor in the room grew almost overwhelming, painful to Mr Dry’s nostrils. He found himself ill at ease, and had to examine the feeling to recognize it. Not fear, no. That would be impossible. A warning, perhaps, from some primeval part of his brain, a part which did not subscribe to his orderly view of the world.

We have ambitions, as well. We want to explore the limits of occult investigative fiction. We’re looking for new approaches, new characters in unlikely settings. From First Nation female investigators to gay detectives in decadent 19th century Paris, from the South American bruja to the hoodoo-woman – we want all these to join the time-honored ranks. 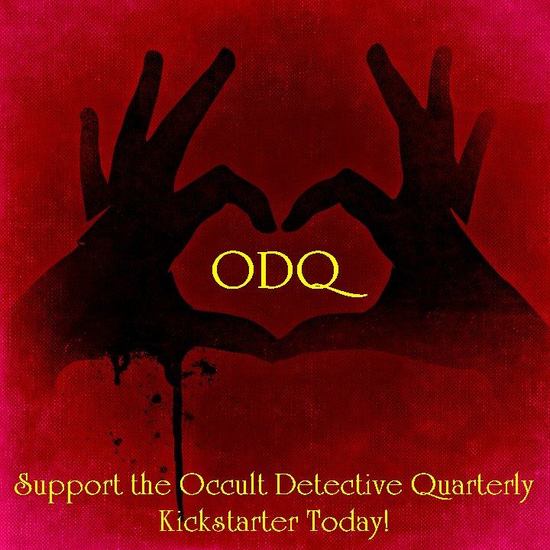 Occult Detective Quarterly will be a perfect-bound print magazine, followed by an e-version for day-to-day browsing. The fiction will be accompanied by fearsome art, fascinating articles and reviews. Editing the journal will be Sam Gafford, an experienced writer, editor and William Hope Hodgson scholar, from the United States, and me, John Linwood Grant, a lifelong addict of supernatural fiction and writer of strange period horror, from the UK.

So all we need now is your support. Our Kickstarter campaign is running right now, in order to guarantee that our contributors get a fair deal, that our magazine is stylish and our readers are delighted. We hope that you’ll have a look and help us bring more doomed meddlers into the world. You never know, some of them might survive…

Link to more about ODQ on greydogtales: here

Hey John – what do you think of Flaxman Low? Granted, the stories are a bit bland, but he came before Carnacki and Max Carrados. Low is usually ignored in discussions of early occult detectives.

Bob Byrne, I wonder if you’ve seen my Chronological Bibliography of Early Occult Detectives. Depending on one’s definition (a matter I discuss), there are many, many more occult detectives prior to Flaxman Low!

Wow! That’s an impressive list… and a lot of detective work!