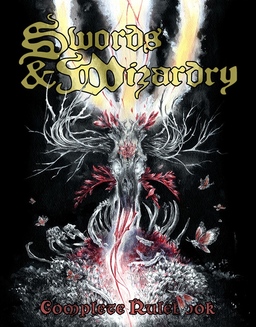 Last month I wrote a post on why I chose to use the Swords and Wizardry (S&W) Complete Rules, instead of Pathfinder, for my latest campaign. S&W is a redesign of Original Dungeons and Dragons (pre-1st Edition), written by Matt Finch and put out by Frog God Games. Due to a stretch goal achieved in the Sword of Air Kickstarter, the S&W rules are permanently free in PDF format from Frog God. You can also buy a hardcopy with a cool Earl Otus cover.

On October 14, Frog God launched their thirteenth Kickstarter to fund a third printing of S&W Complete. But this is a little different than just a simple reprinting effort. Designer and RPGer Stacy Dellorfano had suggested to Finch that Frog God print a new version of the S&W rules, but with art and design done entirely by women. Within minutes, Finch and Bill Webb were on board and the project moved ahead.

There are minor revisions to some of the game play examples, but otherwise it’s a reprint of the second edition. However, there are two brand new adventures included: “The Five Maidens” and “Zaya’s Promise.”

Finch explained that the intent was for Dellorfano to come up with a design that was no less appealing to males, but more appealing to females. Webb has cited Lisa Stevens of Paizo as a huge influence on the role of women in the gaming community (as well as “saving the game industry when WotC cratered on 4th Edition”) and has said that his daughter will taking over Frog God from him some day. So, he was very much into the concept. 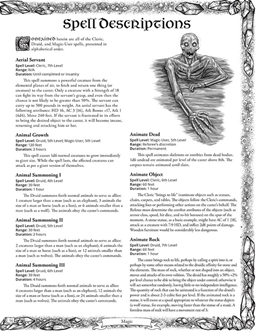 While Frog God is best known for their Pathfinder support, and they’re establishing a foothold with 5th Edition, it is the company’s goal to get Swords & Wizardry into the mainstream and this updated design, using female artists, is an attempt to do just that. The Old School Renaissance seems to primarily be populated by older males (which isn’t surprising, since it’s a recreation of gaming from the mid-to-late seventies). Frog God’s aiming to appeal to both a younger and a female crowd with this project.

Setting out to raise $12,000, in just over a month, it blew past the funding mark in 15 hours! It happened so quickly, Frog God didn’t even have the bonus goals up yet.

I have a PDF of the rules, but I backed this effort and will be receiving a printed copy. Hopefully this will bring new players to Swords & Wizardry, which isn’t the only retro-clone, but it’s one of the best.

Bob thanks as always for making me aware of this great looking gaming kickstarter…the artwork is fantastic, and I’m always happy to see gaming projects that strive to be more inclusive 🙂

All the Best, -Anthony

Anthony – It’s cool to see Frog God really promoting S&W to be “out there.” It’s not just that ‘other’ line they support after Pathfinder (and now, 5th Edition). They’re working hard on the two major modern RPG incarnations, plus one of the top retro-clones. That’s impressive to me.

I’m tempted to get the Earl Otus cover edition as an add-on to my pledge. Then I’d have two cool rules editions.

Thanks for the announcement, Bob! I just backed it. Needed a hard copy of S&W anyway!

Me too, Gabe! I’m really hoping the stretch goals or add-ons will end up with me getting another S&W adventure out of the deal. Except for the Borderlands, I’ve taken all my KS projects for Pathfinder. Wouldn’t mind getting a S&W version of something if I can afford it.

Ironically, the cover makes it look more like something you’d see for a Lamentations of the Flame Princess product. Does not exactly scream “more appealing to females”.

Cirsova – There were a few comments about that on the KS page. A male said it looked like a female body part and a female replied that she loved it. I guess people see it how they want.

Skelos was a bust in my view. There is a thirst for sword and sorcery but I don’t know if there is talent enough to back a magazine. I hope I am wrong. Grimdark is promising. Some magazine will break out and bring out the Robert E Howards in the making.

Ape – If you want to copy the text of your post and leave it as a comment on the Skelos post, I can then delete it from here.

I would post it for you, but it would show up under my name.

Over 700 backers and approaching 200% of goal funding. For stretch goals, Frog God would bring back some out of print stock in softcover, like the Hex Crawl Chronicles (for S&W, of course).

You can back for just a buck and then pick and choose the add ons/stretch goals to add to your library.