I write about a lot of upcoming books in my Future Treasures columns. But I can honestly say I haven’t been this excited for a pair of books in years.

Saga Press is publishing a massive two-volume collection of short stories and novellas from the legendary Ursula K. Le Guin, one of the finest writers we have. Le Guin has published 21 novels — including The Left Hand of Darkness (1970) and The Dispossessed (1974), both of which won Hugo and Nebula awards, and the Wizard of Earthsea series — but my love for Le Guin began with her brilliant short fiction. Stories like “The Ones Who Walk Away From Omelas,” “Vaster Than Empires and More Slow,” the World Fantasy and Nebula Award winner “Buffalo Gals, Won’t You Come Out Tonight,” and the Nebula Award-winning “Solitude.”

The two books, sold separately or in a deluxe box set, are must-have volumes for any serious science fiction collector.

The Found and the Lost: The Collected Novellas of Ursula K. Le Guin collects virtually all of her award-winning longer fiction, starting with 1971’s “Vaster Than Empires and More Slow,” the tale of a scientific expedition doomed to end in madness and death unless two of its members can unravel the secrets of a very alien planet, through 2002’s “Paradises Lost,” in which the fifth generation on a giant colony ship find their way of life — and their mission — threatened when a strange new religion sweeps through the ship. 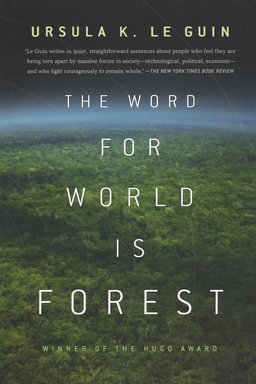 The Found and the Lost contains a rich assortment of Le Guin’s fiction, including four Earthsea tales (World Fantasy award nominee and Locus Award winner “The Finder,” “On the High Marsh”, World Fantasy nominee “Dragonfly,” and “Old Music and the Slave Women”), three Hanish stories (Hugo nominee “Vaster Than Empires and More Slow,” the Tiptree award-winner “The Matter of Seggri,” and “A Fisherman of the Inland Sea”), and three Yeowe and Werel novellas (the Locus Award winning “Forgiveness Day,” Hugo nominee “A Man of the People,” and Hugo and Nebula nominee “A Woman’s Liberation.”)

In fact, I’m pretty sure it contains every novella she’s ever written, with the exception of her Hugo-winning The Word For World is Forest, which was recently re-released as a standalone volume by Tor (at right), and is relatively easy to get (I bought a remaindered copy from Amazon last week for $2.99.)

The three Yeowe and Werel novellas (all set in the Hanish universe) were originally published in Asimov’s SF in 1994-95. Two of them made the cover — here’s all three.

The Found and the Lost: The Collected Novellas of Ursula K. Le Guin will be published by Saga Press on October 18, 2016. It is 803 pages, priced at $29.99 in hardcover and $7.99 for the digital edition. Read an except (the complete novella “Vaster Than Empires and More Slow”) at Simon & Schuster.

The Unreal and the Real is actually a single-volume reprint of a two-volume collection published by Small Beer in 2012. 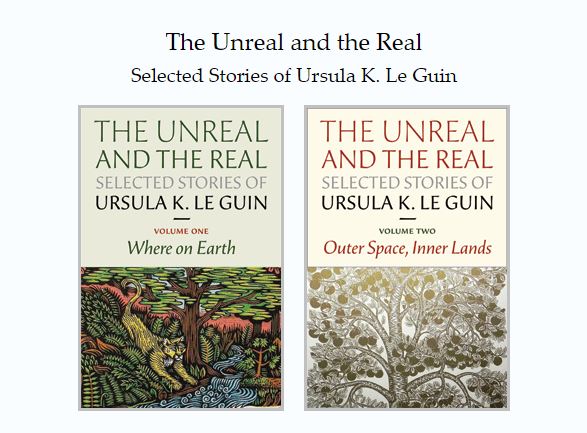 The first volume, Where on Earth, collected her non-fantastical stories, and the second, Outer Space, Inner Lands, gathered her science fiction and fantasy.

The Saga Press edition of The Unreal and the Real maintains that distinction, separating out Le Guin’s non-SF tales first. Here’s the TOC for the first half of the book, containing 18 stories.

Introduction by Ursula K. Le Guin
Brothers and Sisters
A Week in the Country
Unlocking the Air
Imaginary Countries
The Diary of the Rose
The Direction of the Road
The White Donkey
Gwilan’s Harp
Mays Lion
Buffalo Gals
Horse Camp
The Lost Children
The Water is Wide
Texts
Sleepwalkers
Hand, Cup, Shell
Ether, OR
Half Past Four

And here’s the contents for the second half, with her SF work.

Introduction by Ursula K. Le Guin
The Ones Who Walk Away from Omelas
Semley’s Necklace
Nine Lives
Mazes
The First Contact with the Gorgonids
The Shobies’ Story
Betrayals
The Matter of Seggre
Solitude
The Wild Girls
The Fliers of Gy
The Silence of the Asonu
The Ascent of the North Face
The Author of the Acacia Seeds
The Wife’s Story
The Rule of Names
Small Change
The Poacher
Sur
She Unnames Them

Note there’s some minor overlap with The Found and the Lost — two stories, to be exact. “Buffalo Girls,” and “The Matter of Seggre.”

For those of you who like box sets, both volumes are available in a handsome slipcase edition, also from Saga Press. 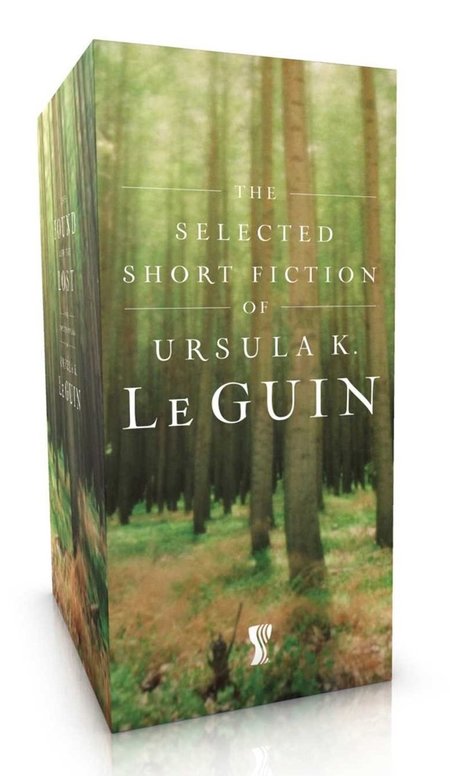 See all of our recent coverage of the best upcoming fantasy here.

A couple of nitpicks: “Old Music and the Slave Woman” is another Yeowe/Werel story. (For that matter, so is “Betrayals”, not in the novella book but in the “Unreal” part of The Unreals and the Real.) Also, the full title of “Another Story” (one of my very favorites) is “Another Story; or, A Fisherman of the Inland Sea”.

I note that neither book includes “The Stars Below”, another of my favorite Le Guin stories; and neither includes “Mountain Ways”, which is pretty good too (and which is related to “Another Story”.)

And “Selection” remains uncollected! (An early story from Amazing, that I reviewed here some time ago as I recall.)

Thanks Rich! Your knowledge of short fiction is unparalleled, as always.

Not sure what to do about that fourth Yeowe/Werel tale… I don’t have space to include another Asimov’s cover! 🙂

Neither “Betrayals” nor “Old Music and the Slave Woman” were from ASIMOV’S — both appeared in anthologies. (“Old Music …” in one of Silveberg’s books I think… FAR HORIZONS, the one with “continuations” of famous SF series). Of course, anthologies have covers too! 🙂