I first met Patrick Swenson, publisher and editorial mastermind at Fairwood Press, back in the late 90s. I think it might have been James Van Pelt who introduced us, after I wrote a review of Patrick’s magazine, TaleBones. I helped Patrick negotiate with a squatter who was sitting on the address he wanted for his website (unsuccessfully, as I recall.) At the time, Fairwood Press was a small press underdog, with only a handful of titles to its name, but a fast-growing reputation.

Fastforward about 17 years, to Worldcon in 2016. I was walking through the sprawling dealer’s room when I spotted Patrick sitting behind a table groaning under the weight of dozens and dozens of eye-catching science fiction and fantasy books, from some of the biggest names in the industry — including Robert Silverberg, Michael Bishop, Jay Lake, Carrie Vaughn, Devon Monk, Tom Piccirilli, Tina Connolly, James Van Pelt, and many others. Could this possibly be the same Fairwood Press?

Yes, as it turned out.

Here’s the back covers for the volumes above.

Truth to tell, it was a little overwhelming to discover that Patrick had produced so many gorgeous books while I wasn’t looking. It was a genuine pleasure to see them all stacked up next to each other like that, like stumbling into a Cave of Wonders for SF fans.

But it was also more than a little embarrassing to realize that I’d somehow missed the point at which Fairwood had transformed into one of the most successful and important publishers in the field. I like to think I’m more on top of things than that. 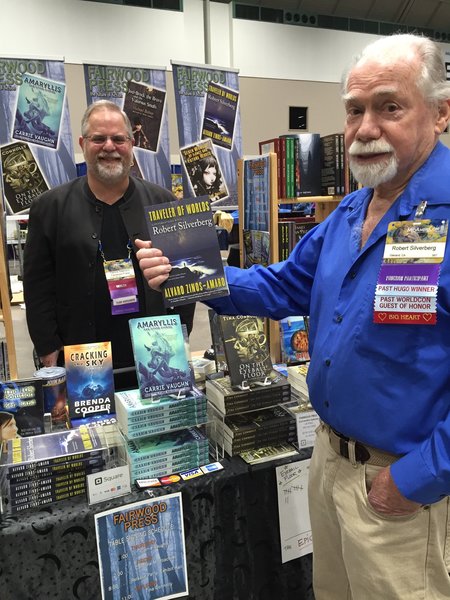 Patrick Swenson and Robert Silverberg in the Fairwood
Press booth at Worldcon 2016. Photo by Alvaro Zinos-Amaro

Patrick was celebrating the release of several new books at Worldcon, including Traveler of Worlds, a collection of interviews/conversations between Robert Silverberg and his longtime friend Alvaro Zinos-Amaro, on writing, travel, opera, and numerous other topics. 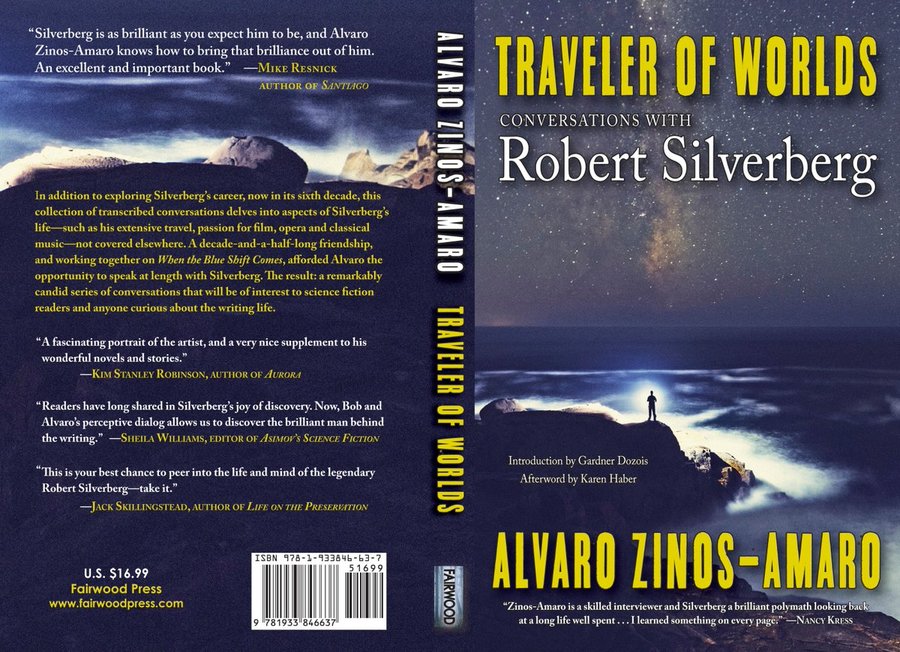 When I reached out to Alvaro Zinos-Amaro while I was preparing this article, he also sent along this pic taken at Bob Silverberg’s house, and I can’t resist sharing it. 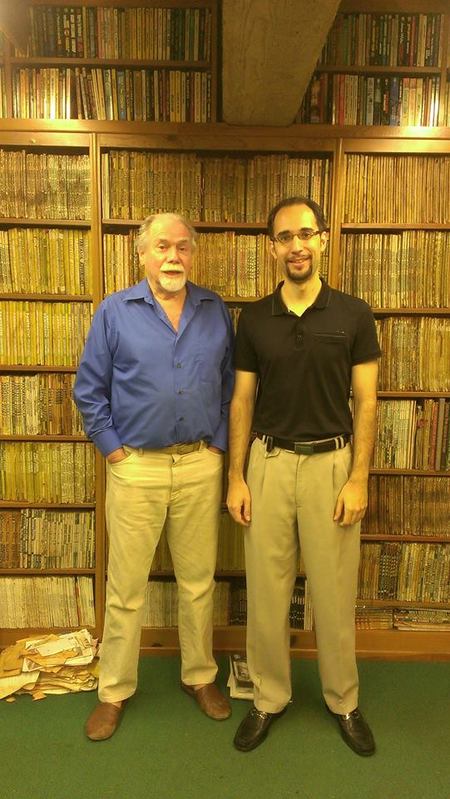 Robert Silverberg and Alvaro Zinos Amaro.
Look at all those fabulous pulps!

I squeed in delight over all those magazines in the background, and Alvaro passed along this additional tidbit:

Yes, that’s in the basement where the science fiction is kept. The run of magazines is staggering. That is a fraction of one wall and there’s a second equally full.

Sorry for the brief tangent, but pictures of pulp collections make me all gooey-eyed.

One of most striking things I noticed about the books on Patrick’s table, especially the more recent releases, was just how far Fairwood Press has come in terms of design and cover art. Usually that’s where small presses tend to fall down. But over the last few years Fairwood Press has published some of the most gorgeous books in the industry. Check out the small sampling of their recent releases below.

Two other new releases at the con were Seven Wonders of a Once and Future World and Other Stories, the debut collection from Caroline M Yoachim, and Tina Connolly’s new collection On the Eyeball Floor. Caroline was in the booth when I stopped by, and we had a nice talk. She and Tina had an “Epic Showdown,” seeing who could sell the most copies of their collection over the weekend. The tally sheet (which you can see peeking out from behind Bob Silverberg above) was posted at the front of the booth. 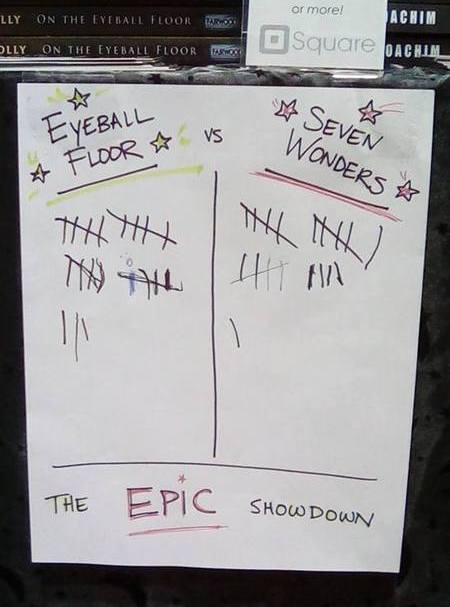 I tried to buy a copy of Caroline’s collection, but she couldn’t sell me one…. they were sold out! Eventually more copies arrived, and the Epic Showdown continued. At the end of the con, Patrick announced that the tally was tied, at 52 copies sold apiece.

[Here’s the back covers for the three titles above.]

I did buy a copy of Tina’s On the Eyeball Floor, and it was the book I opened on the flight home to Chicago. I read the title story, “On the Eyeball Floor” (from Strange Horizons, 2008), a tale of unrequited love and unbridled ambition on the factory floor of a robot assembly… with an imaginative twist. A fine example of Modern Weird.

Patrick’s novel, The Ultra Big Sleep, is the sequel to his SF/detective novel The Ultra Thin Man, published by Tor in 2014. In this volume, Dave Crowell uncovers fragments of memory that might lead to his missing father… and gets caught up in a conspiracy beyond his understanding, and pulled into an underworld drug war on a hostile planet. If you enjoy mystery and space opera, this one is for you.

I had very little room in my luggage to transport books, but I knew I had to bring home at least a few of the wonders on display. It was agonizing to winnow it down to a manageable number, but I ended up taking four books home from the Fairwood Press booth: On the Eyeball Floor by Tina Connolly, Carrie Vaughn’s collection Amaryllis and Other Stories, Devon Monk’s collection A Cup of Normal (including her Black Gate story “Stichery,” which became the basis for her new House Immortal series), and James Van Pelt’s new novel Pandora’s Gun.

Fairwood Press publishes books for virtually every taste, and I was genuinely delighted to see them doing so well. Over the past 17 years they’ve become one of the most prolific and important small presses in the genre. Check out their website here, and browse their vast catalog. You’re sure to find something you like.

Our recent publisher spotlights include:

See all of our recent Convention Reports here.

John, I suspect most of the people reading this get gooey-eyed at a pulp collection like that. I know I sure do and appreciate the tangent. That collection is Amazing and Astounding and Fantastic. 😉

Indeed it is, Amy!