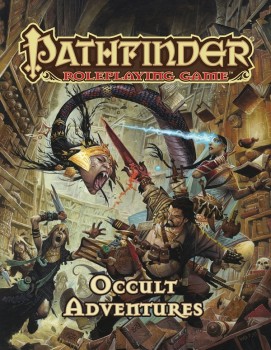 Humans hate to be frightened … except when we love it. There’s a small, sinister part of our brains that love terror and menace, not in real life so much as in our entertainment. This shows up regularly in our fiction and films, of course, as shelves are stocked with horror and thriller novels, as well as slasher flicks and suspenseful films and television series (some of which, I hear, even feature zombies).

Over this month leading up to Halloween, I’ll be focusing on how this horror element manifests itself in some great tabletop games which, among other things, can add immense fun to the Halloween holiday seas. (Am I the only one who celebrates all month long?)

To begin, I’d like to focus on some recent releases from one of my favorite RPG systems: Pathfinder RPG. While there has never been a shortage of monsters in the Pathfinder world of Golarion, over the last year they have had two major releases that really up the ante on the terror quotient, by introducing dynamic new game mechanics related to exploring these horrors. These manuals, together with their current Lovecraftian-themed horror Adventure Path series Strange Aeons [Paizo, Amazon], means that if you want to dive directly into a world full of terror and occult mysteries, you’ve got everything at your disposal to do so.

Released in August of 2015, Occult Adventures [Paizo, Amazon] formally introduces a psychic-based magical system into the Pathfinder RPG. These powers draw from the internal mental powers of the individual (or other individuals), rather than from the sources that fuel arcane or divine magic, and they provide a wealth of new approaches to magic to mix things up for people who have been playing wizards and clerics for several decades. In addition to six new psionics-based occult classes, and a variety of archetypes to offer psionic variations on existing classes, it introduces psychic magic, various new occult rules and mechanics, and occult-related equipment and magical items.

The use of psychic powers is nothing new to the fantasy roleplaying scene. Pathfinder was based on Dungeons & Dragons 3rd edition, which had psionics options introduced in the 2001 Psionics Handbook [DriveThruRPG], a revision of earlier psionics rules that had existed in previous editions. This alternative magical approach dates all the way back to the supplement Eldritch Wizardry by Gary Gygax and Brian Blume, published in May 1976 (and also available in electronic form from DriveThruRPG).

Here are a handful of the new mechanics offered in this rules supplement:

Probably the most useful thing from Occult Adventures, though, is the chapter on “Running an Occult Game,” which focuses on how to build up tension within an occult-themed game. In an occult adventure, the player is confronting as much mysteries and confusion that must be wrestled with as they are monsters that must be hit with swords. (Those are still there, as well.) The spirit you confront is not necessarily a ghost that must be destroyed, but perhaps a restless spirit that must somehow be given release, or perhaps even won over to become an ally. You may battle in a psychic duel with your adversary, with the only way to beat them by entering their own warped psyche directly.

The occult powers available in this rules supplement are a good starting point, providing a lot of options for truly terror-filled adventures. But if you really want to delve into the mind-numbing terror possible within a fantasy adventure game, Paizo went one step further with their follow-up rules supplement. 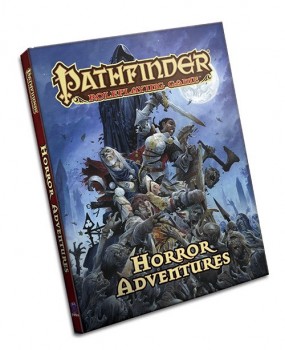 The recently-released Horror Adventures [Paizo, Amazon] is a rule supplement that offers a terrific mix of options for characters and really horrific things that can happen to characters, which are really the two key elements of great horror: have a “good character” (either competent or likable or both) and have really horrible things happen to that character, particularly horrible things in which their positive traits are not particularly helpful.

Actually, that may just be a good description of dramatic storytelling in general.

The book contains the standard dose of archetypes and class options for an ever-growing array of classes. This includes horror-themed archetypes for some core classes such as Cleric, Druid, and Paladin, then also for some of the less-standard classes like Alchemist, Investigator, and Witch, as well as the recent Vigilante class, introduced in Pathfinder’s Ultimate Intrigue [Paizo, Amazon] earlier this year, and then for 5 of the occult classes (for some reason, the Psychic class gets short shrift here). There are new feats, spells and occult rituals, and then also horror gear and magical items. All very good things to have, of course.

But the horror elements that you can throw at the characters are the real prize here. There are expanded rule mechanics for handling Fear and Sanity within a horror-themed game, as well as the possibility of obtaining corruption from your interaction with the horrific entities you battle, which can slowly modify your character physically and mentally until it is purged from your body and/or soul. There are rules for curses, madness, fleshwarping, horrific environments and diseases, expanded rules for haunts, and a Bestiary of enemies to face. My favorite of these, personally, is the Dread Lord template, which allows you to create an evil conqueror who is bonded to the land he rules over.

Between these two rules supplements, there are enough goodies to build a really horrific roleplaying storyline in the Pathfinder RPG, dripping with fear and madness. Why kill your party of heroes, when you can instead haunt their nightmares forever?

Other Articles of Interest:

Thanks for this review,

It looks like there are at least four other Pathfinder Occult titles (including Occult Realms), and they all look interesting. Many of them are already priced quite reasonably as Used.

Hey Andrew – I just read a big chunk of the Strategy Guide this week and was thinking of writing something up on it. I started playing in the seventies, and I think this is a great player’s guide – it’s not just for beginners.

Have you checked that one out?

Anthony – Thanks. Yes, they typically release several smaller supplements that dovetail thematically with their main releases. I didn’t think to list those, but I probably should have. It seems like there’s often a related Bestiary, a Realms book for setting, and an Origins book that includes related character options.

Bob – Yes, I have read the Strategy Guide. It was very cool. It has merits to more experienced players, but I do think is really focused on beginners. That said, I did find a handful of useful ability/power combinations that hadn’t really occurred to me before. I remember thinking it probably wasn’t worth the $30 cost for the hardcover for experienced players, but the PDF is only $10, and it’s definitely worth that.

Andrew, it is definitely great that Paizo makes so many of their PDFs available for $10 🙂

…and Bob, in case your a “paper fan” like me, I just purchased a very clean used copy of the Strategy Guide for six dollars and change… under $11 shipped to my door. WELL worth that I thought!

Hey Anthony – I’m curious to see what you think of the Falcons Hollow stuff after you read through it. Feel free to drop me an email with your thoughts: upabob@yahoo.com

Bob I will do that…

I have just gotten quite a few used Pathfinder tomes in recently (Xmas come early 😉 but Falcons Hollow is on top of the pile.