It’s been a month or two since I’ve been able to make time for some classic pulp SF. But over at his website Strange at Ecbatan, Rich Horton has piqued my interest in a 1957 Ace Double, pairing A.E. van Vogt’s Empire of the Atom and Space Station #1 by Frank Belknap Long. Here’s Rich:

I approached Empire of the Atom with some caution. It is another “fix-up”, though a fairly coherent one, comprising five novelettes first published in Astounding in 1946 and 1947. It was published in hardcover by Shasta in 1957, followed the same year by this abridged Ace Double edition…. I have to say I was pleasantly surprised…

It is set some 10,000 years in the future, after humans have colonized the planets of the Solar System, and then been reduced to barbarism on each of these worlds. A city-state, Linn, arose, and in the recent past it conquered the world and began to try to annex the barbarians on Venus, Mars, and even outer satellites such as Europa. The ruler, or Lord Leader, is a vigorous man but getting older. A new child is born to his scheming second wife, Lydia. (These are, of course, analogues to Augustus and Livia.) The new baby, named Clane, turns out to be a mutant — Lydia was accidentally exposed to radiation — this society uses radioactive metals (and worships the “Atom Gods”) but has no idea how they work. As a mutant Clane should be killed. However, a leading Temple Scientist wants to raise him and show that mutants, if treated properly, have the same potential as anyone. So Clane is raised, somewhat isolated, and becomes an unusual but very intelligent young man… There is a sequel, The Wizard of Linn, serialized in Astounding in 1950.

Empire of the Atom was one of Van Vogt’s most popular novels, with over a dozen editions from multiple publishers over the next four decades.

Here’s a sample of some of the other paperback editions.

For the completests in the audience, these volumes are (from left to right):

Obviously, my favorite cover is the Pennington (and not just because he did two covers for Black Gate, BG 12 and BG 14). The the only edition I don’t have is the Timescape, but I’ll get it eventually. I’m in no hurry; that cover is uggg-lee.

I do wish I had a copy of the original unabridged hardcover edition from Shasta, published in 1957 with a cover by H. W. McCauley. 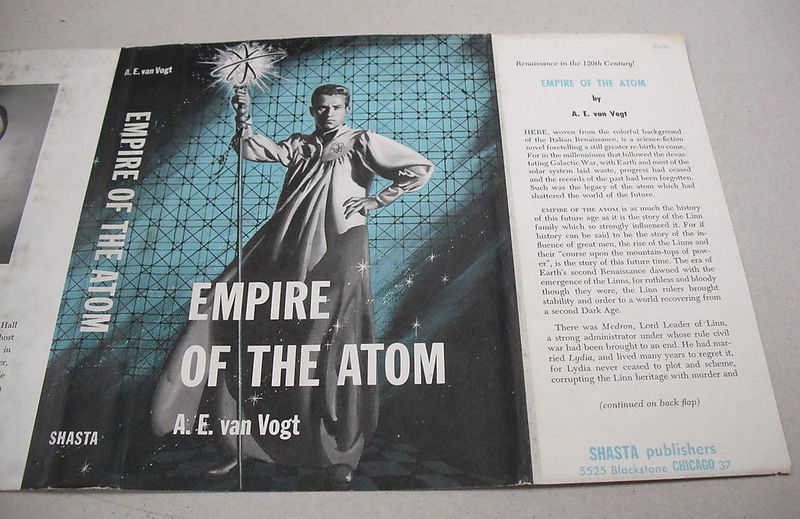 Check out those cool genealogical endpapers. 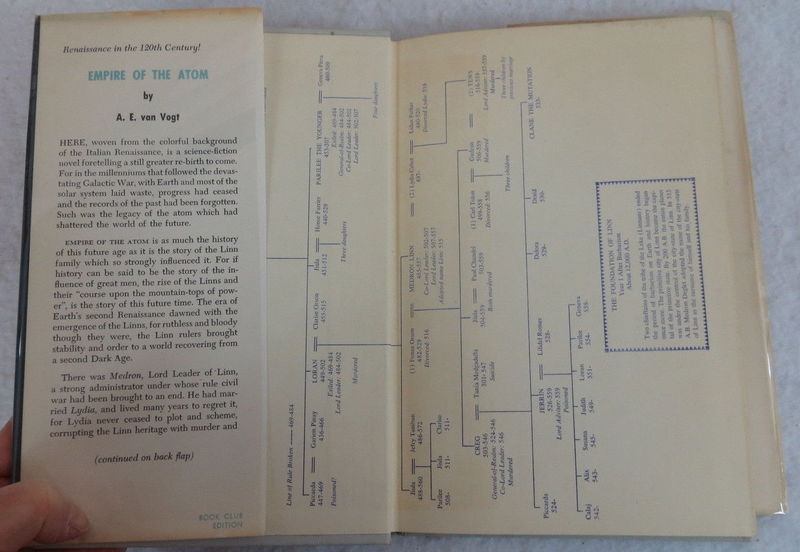 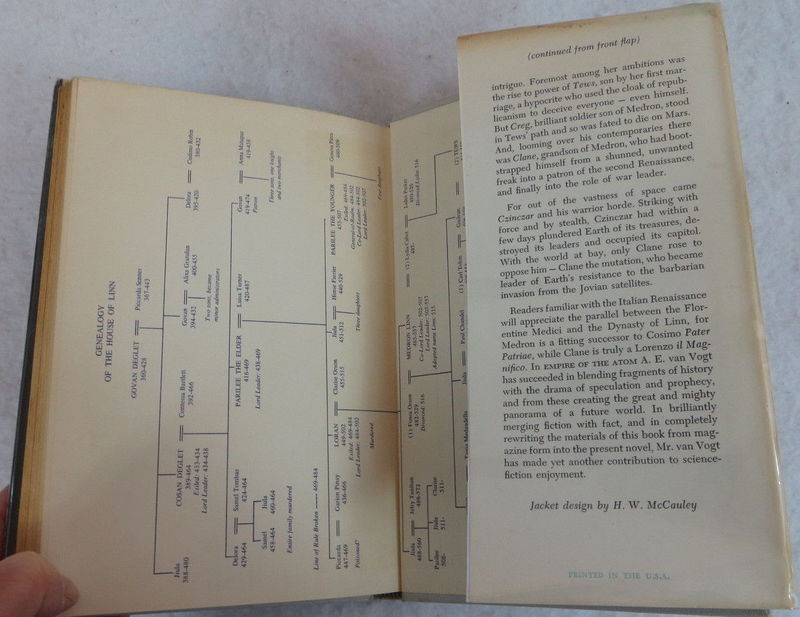 Like most of Van Vogt’s work, Empire of the Atom has been out of print for over two decades. The most recent reprint was the Collier Nucleus Science Fiction Classic edition, which appeared in February 1993.

Space Station No. 1 has a much less illustrious career. It was reprinted twice, once by Ace in 1962, and then in 2010, as part of the Armchair Fiction line. Here’s Rich’s take on it.

Space Station #1 is some 55,000 words long… It opens with a certain Lieutenant David Corriston in a desperate fight for his life in the bowels of the title Space Station. It turns out that this fight is the result of a murder he had witnessed just a few minutes earlier, and perhaps more to the point, of his conversation with Helen Ramsey, the daughter of Stephen Ramsey, who controls the uranium mining on Mars, apparently by oppressing the colonists. There follows a somewhat wild sequence of events, as Corriston meets Helen, the two fall instantly and implausibly in love, Helen’s bodyguard is killed, she disappears, Corriston barely survives his fight, a uranium freighter coming to the station suddenly loses control and veers to the surface of Earth in a terrible disaster, Corriston is imprisoned by the station’s Captain, he discovers that a number of people, including Helen and the Captain, are wearing very sophisticated masks …

For several chapters I found this quite entertaining, but somewhere along the way it went wildly off the rails.

Empire of the Atom/Space Station 1 was published by Ace Books in 1957. It is 162+157 pages, priced at 35 cents. The covers were by Ed Valigursky and Ed Emshwiller, respectively.

Here’s a closer look at Ken Barr’s cover for Frank Belknap Long’s The Rim of the Unknown (1978, Condor), just because I think it’s awesome.

And our recent coverage of A.E. van Vogt includes:

I have a copy of the hardcover Shasta first edition of The Empire of the Atom, in excellent condition, dust cover and all. Got it for 50 cents at the town library book sale. Got a 1931 hardcover edition of Dashiell Hammett’s The Glass Key for the same price. If I’d gone back the next day, I could have gotten them for 25 cents.

An old town patriarch had died, and his family had simply donated his books, including a decades-spanning sci-fi collection, to the library. And the library people just wanted it off their hands. Hardcovers for 50 cents apiece, a grocery sack full of paperbacks for a dollar. I brought away boxes, of course.

Sorry, that happened a couple years ago, but I’m still reveling in it. Once in a while, living in a small town in Texas has its advantages…

Still, I’m glad you were there to save much of that wonderful collection. I hear far too many terrible stories of the fate of unsold books from library sales. Nice job rescuing what you could.

That is a cool find. (Not as monetarily valuable as I might have guessed, though — the Shasta First in Fine/Fine condition goes for about $60 on Abebooks.)

Empire is quite a fun read, a little more organized that a lot of Van Vogt. Even his arch-enemy Damn Knight sort of liked it.

Is “Damn Knight” intended or a Freudian slip/ 🙂

*(And I concede the arguments of those who say that people like Knight and me must be missing something essential in novels like THE WORLD OF NULL-A.)

Wow – I guess it’s a little too early in the morning for me! Damon, of course, and I too largely agree with Knight while still appreciating Van Vogt’s particular brand of nuttiness.

I’ve seen it going for somewhat more, not that it sells for that. Doesn’t matter to me, of course, because why would I ever sell such a glorious find?

I, for my part, will concede the arguments of those who agree with Knight’s assessment. It’s true that van Vogt’s fix-ups were often wildly incoherent. It’s also true that his style was usually atrocious. Nevertheless, A. E. van Vogt remains one of my favorite science fiction authors, for reasons that not even I can altogether fathom.

I had that first Ace Double, but it went when I got rid of them all at a used book shop. I was happy with the books I got in return, but sometimes I wish I still had them.