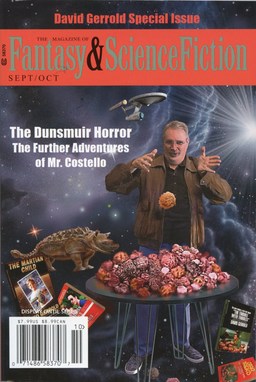 When I was at Worldcon last month, I attended the Friday morning reading group hosted by F&SF. It featured five writers reading their stories from the magazine — Cat Rambo, David Gerrold (above middle), Sarah Pinsker (right), William Ledbetter, and Esther Friesner — and was moderated by editor C.C. Finlay (above left).

It was a lot of fun… and it certainly built up anticipation for the upcoming September/October issue. Two of the authors, David Gerrold and Sarah Pinsker, read extremely enticing excerpts from stories appearing in that issue. At the end of the panel Charles Finlay announced early copies were available in the back. I got in line to get one, but ended up giving my precious copy to someone at the con, and I wasn’t able to retrieve it before flying back to Illinois (*sob*). So I had to wait impatiently for several weeks until the issue arrived in my local bookstore, and I snapped up a copy a few days ago.

It’s a David Gerrold Special Issue, featuring two new novellas by Gerrold, a memoir, and an appreciation by Kristine Kathryn Rusch, “The Amazing Mr. Gerrold.” It’s F&SF‘s first author special in over a decade, and I’m glad to see Finlay bringing the idea back. (Gerrold is having quite a renaissance in the pages of F&SF… his novelette “The Thing on the Shelf,” featuring a horror writer nominated for the coveted Stoker Award, appeared last issue.)

The issue’s “The Dunsmuir Horror,” a Lovecraft pastiche starring author David Gerold, is both funny and very disturbing. Written in the form of a letter to Gordon van Gelder, F&SF‘s publisher and former editor, from the narrator as he recovers in a mental institution (as I said… very Lovecraftian), the story relates Gerrod’s investigations into a sinister American town that tries to lure weary travelers into stopping.

It’s an exceptional piece and a very fun read, and already getting some good notice. Here’s Clancy Weeks at Tangent Online.

David Gerrold’s second entry, “The Dunsmuir Horror,” is a stream of consciousness fever-dream of a horror story told in the form of an extended personal letter from Gerrold to F&SF‘s publisher, Gordon Van Gelder, with an attachment by Dr. Morgan. Morgan is Gerrold’s psychiatrist/keeper in the hospital where he is being held. The titular Dunsmuir is a haunted town on the way to Portland that disappears and reappears at will in an attempt to ensnare liars and thieves to consume. The letter is a plea for Van Gelder to investigate the place to see if it is real.

I could write another thousand words describing this story, and still not do it justice. Just know a master has been at work and leave it at that. On a personal note, I understand now why it is so difficult to break into the pages of F&SF, and am not sure (assuming the truth of Dr. Morgan’s missive) I really want to. Just be sure to stay away from the color green.

My favorite story from the reading, however (and in fact, one of my favorite readings from the whole convention) was Sarah Pinsker’s “Talking to Dead People,” featuring two young women with a rather unusual business plan. Here’s Clancy again.

Gwen is very good at working with her hands, while her college roommate, Elizabeth Mint, is better at manipulation of people. What Eliza really excels at, though, is her study of unsolved murders. The two strike a business deal where Gwen builds models of “murder houses” and Eliza creates the AI software to answer any question about the crime in the character of those involved. It sounds complicated, but in “Talking to Dead People” Sarah Pinsker makes it remarkably clear. Everything is going great, until Eliza makes a special present for Gwen.

There’s a lot under the hood here, and Pinsker explores a it in a relatively short space. Like the Lizzie Borden murders, though, we are left with more questions and no clear answers. Is it horror? Science Fiction? A murder mystery? Who cares? Very good stuff.

The cover, by David Hardy, features a photo likeness of Gerrold, and tributes to his many contributions to the field over the years, including the famous Star Trek episode “The Trouble With Tribbles,” the award winning tale “The Martian Child,” and a dinosaur (?).

This issue is on sale until November 5ish (ignore the typo on the cover that says Sept 5 — that was the date last issue). We last covered F&SF with the July/August issue.

Our September Fantasy Magazine Rack is here, and all of our recent magazine coverage here.

If there was any justice in the world, F&SF would sell millions of copies with every issue. Also, Black Gate would still be in print, and my 2006 van would have less than 150,000 miles on it. Ahhh…to dream. Thank you for your coverage here. It really is an excellent issue of an outstanding magazine.

Glad you enjoyed the article Gus! And I’m doubly glad you’re a magazine reader. Sometimes it seems there are fewer and fewer of us left.

I wonder if Gerrold’s story disguised as a letter to Van Gelder owes any of its origin to “The Madness of Gordon Van Gelder,” by Michael Swanwick, which Swanwick wrote as a piece of personal correspondence and was surprised to be paid for and see appear in the magazine.