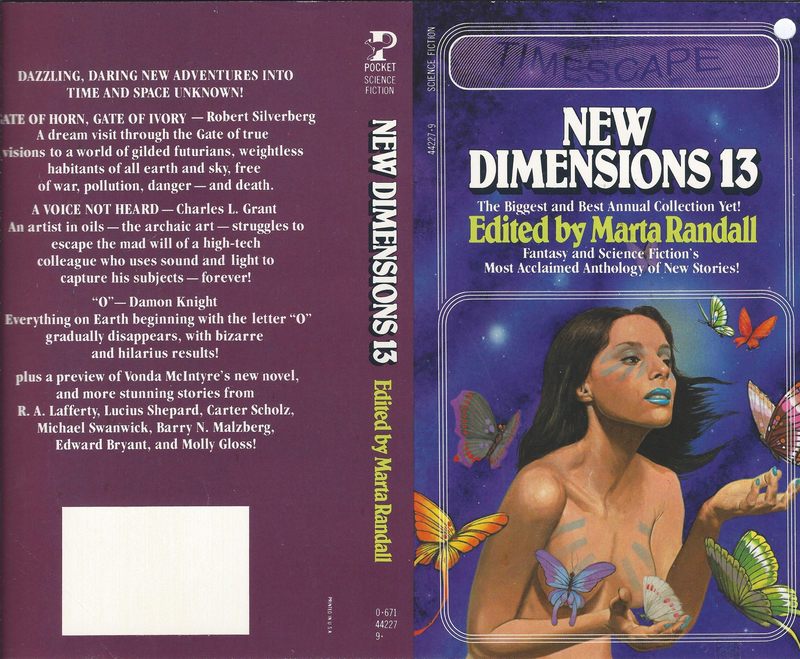 Robert Silverberg’s New Dimensions was one of the most celebrated anthology series of the 70s. It published an impressive amount of award-winning fiction, including R. A. Lafferty’s “Eurema’s Dam” (1973 Hugo), Ursula K. Le Guin’s “The Ones Who Walk Away from Omelas” (1974 Hugo), James Tiptree, Jr’s “The Girl Who Was Plugged In” (1974 Hugo), Suzy McKee Charnas “Unicorn Tapestry” (1981 Nebula), and many others.

New Dimensions 11 and 12 were co-edited with Marta Randall. The final volume, New Dimensions 13, was solely edited by Randall, and it boasted a dazzling range of writers, including Vonda McIntyre, Robert Silverberg, R.A. Lafferty, Lucius Shepard Michael Swanwick, Barry N. Malzberg, and many others. There’s just one problem with it, however: no finished copies are known to have survived. The entire print run was reportedly pulped, and the only copies that exist today were advance copies sent out to reviewers.

Why? That’s part of the mystery. Gunter Swain posted the cover above on Facebook today — the first image I’ve ever seen of the book. He reports the book “was published but was never distributed.” In the comments section, Marta Randall shed some light on the mystery.

This story breaks my heart. Although Robert Silverberg and I were listed as co-editors on New Dimensions 11 and 12 (“If your table of contents is all women’s names, I’ll pull my name from the anthology”), ND13 was my baby alone. It did indeed get to galleys and cover printing before PocketBooks pulled it on the excuse that anthologies don’t sell. Nobody fought for it except me (thanks bunches, Hartwell).

Many of the stories were first pubs by writers who went on to much greater things. Some of the stories went on to win awards when they were eventually published. I’m still proud of having chosen and edited each and every one of them. Bitter a little? Me? Oh f–k yes. 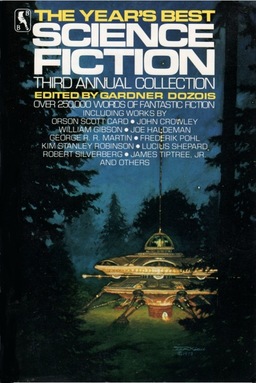 It is possible a printer’s sample copy or something similar exists somewhere? I suppose it’s possible, but not very likely. Gardner Dozois writes:

I don’t believe there ARE any copies, as such. I used to have a galley of it, and I don’t think they ever got out in any other form, even though they did the cover.

If you see a copy out in the wild, the Black Gate team would appreciate a friendly phone call.

The most famous story from this anthology, I think, is “All My Darling Daughters”, by Connie Willis, an absolutely searing story. To be sure “Flying Saucer Rock and Roll” and “Superluminal” are pretty well-known as well.

You used to see the byline “O. Niemand” a lot those days. It was a pseudonym for George Alec Effinger. The Niemand stories were pastiches, imitating the voices of major writers.

I always assumed the lack of the Silverberg name spooked Pocket Books.

Marta Randall was a heck of a writer, and I really miss her work — she kind of disappeared after the ’80s, though a couple of pretty good stories appeared in 2007 in F&SF.

> The most famous story from this anthology, I think, is “All My Darling Daughters”, by Connie Willis, an absolutely searing story.

I remember that one from Ellen Datlow’s Alien Sex anthology — although it first appeared (I think) in Connie’s collection Fire Watch, and then in Terr Carr’s Year’s Best SF 15.

> You used to see the byline “O. Niemand” a lot those days. It was a pseudonym for George Alec Effinger.

I had no idea! Thanks for the tip.

> Marta Randall was a heck of a writer, and I really miss her work — she kind of disappeared
> after the ’80s, though a couple of pretty good stories appeared in 2007 in F&SF.

I agree with Marta Randall. This is indeed heartbreaking, even shocking. The implied lack of support by Silverberg and Hartwell (if I understand MR’s comment correctly), is very disappointing. It looks like a fantastic anthology, and it would have graced the series.

Did all the stories eventually get published?

To answer Charles Martel’s question: Yes, everything was published.

Using ISFDB, I made the following list showing the first publication venues and appearances in Gardner Dozois’s Year’s Best series. I also indicated one case where a story was in Terry Carr’s Best of the Year, though not in the Dozois volume.

Wow — that took some leg-work, Dolphin. Thanks for the effort! 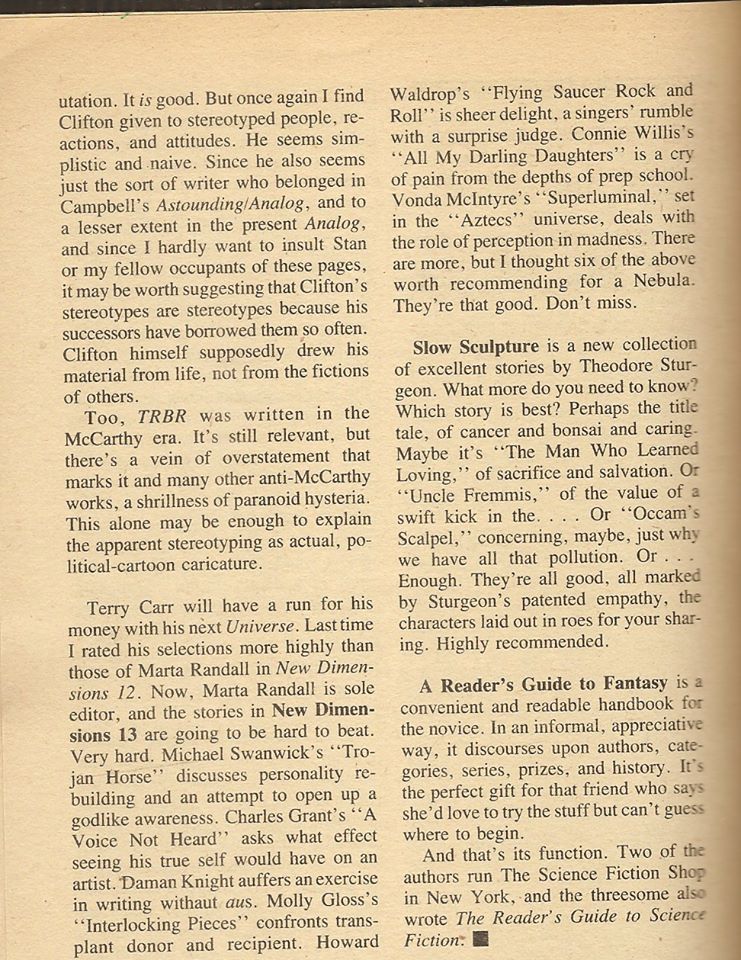 Also, over in the original Facebook post, Alvaro Zinos-Amaro posted this on behalf of Robert Silverberg. I thought it appropriate to reproduce it here:

Marta Randall and John O’Neill: Bob Silverberg isn’t on Facebook, but saw the article on Black Gate, and I’m posting this comment on his behalf. He had reached the point of no longer wanting to deal with the flood of manuscripts coming in for New Dimensions and suggested to Marta that she take over the series. The plan was two transitional issues in which Bob would share the editorial byline and then, when she was established as co-editor, remove his name and leave Marta solely in charge. This comment is meant by way of clarification that he didn’t suddenly withdraw his name in lack of support when ND13 arrived.

And with regard to the rave review, isn’t it ironic that three of the stories ended up in Terry Carr’s Universe series, given that the New Dimensions series was its main competitor at the time?

John, Darrell Schweitzer’s personal Cave of Wonders must rival your own. Is there any venerable relic of the genre he can’t pull up for reference?

Sarah — at the very least, his Cave of Wonders is substantially better organized than mine!

I am aware of 153 Timescape mmpbs. Two more are identified as Timescapes on the ISFDB: BEAUTY by Robin McKinley 2nd print Dec 1981 & E PLURIBUS UNICORN by T Sturgeon 3rd print (?) Feb 84 ( based on issue date, this would only have Timescape printed on spine, no logo on cover). I have never seen those two printings, but would like to buy if they are Timescapes! I suspect they are not, but can anyone confirm? I am also aware of images of two covers which never made it to print: NEW DIMENSIONS 13 _& James Gunn THE JOY MAKERS ( ISBN 0671833022).