The Kickstarter for the long-awaited Seventh Edition of Call of Cthulhu, one of the greatest role playing games of all time, was one of the most successful crowdfunding campaigns in gaming history, pulling in over $560,000 on a $40,000 goal. The PDF versions were released back in 2014, but the promised print edition took a lot longer to arrive. But it is now here — officially announced on the website on August 26, and already offered for sale at various online outlets.

The 7th Edition, based on the original rules by Sandy Peterson and Lynn Willis, was significantly revised by Paul Fricker and Mike Mason. It weighs in at 448 pages in hardcover, with an eye-catching cover by Sam Lamont and some color interiors. A significant amount of supporting material is already available, including the Call of Cthulhu Keepers Screen, a hardcover Investigator Handbook, the S.Petersen’s Field Guide to Lovecraftian Horrors, and the first 7th Edition adventure collection, Nameless Horrors.

If you’re new to Call of Cthulhu, or just curious, great! CoC is one of the most innovative and creative role playing games ever made, and — almost uniquely in the industry — its supplements and adventures make great reading, even if you never have the chance to sit down at a table with fellow players. It was the first semi-contemporary RPG, and also the first to feature ordinary folks as protagonists. But don’t just take my word for it… here’s a dead-on quote from Ed Grabianowski’s io9 article, “Call Of Cthulhu Was The First Role-Playing Game To Drive People Insane.”

No swords. No wizards. Just regular humans, in way over their heads as they work to uncover the mind-shattering horrors of the Lovecraftian mythos. That’s the promise of the Call of Cthulhu RPG, and over 30 years later we’re still coming back for more.

You can’t really overstate how influential Call of Cthulhu is in the world of tabletop role-playing games. First released in 1981 by Chaosium, the game has gone through seven editions and inspired a writhing horde of variations and homages. It turned the heroic fantasy of Dungeons & Dragons on its head, making investigation the focus of each adventure instead of combat, using weak human characters completely outclassed by any threat they might face, and more or less ensuring that, instead of a long campaign where you eventually become a mighty wizard or knight, you were probably going to die or go insane. Tonight. And again next week.

Here’s a sample from the interior of the 7th Edition.

And a look at part of the introductory section. 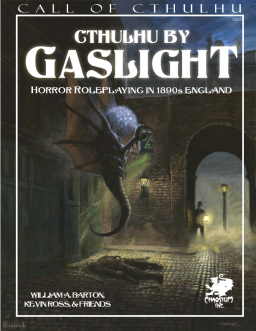 Call of Cthulhu, 7th Edition was published by Chaosium in August 2016. It is 448 pages, priced at $54.95 in hardcover; a PDF version is also available, but there’s no info on it anywhere I can find. The cover is by Sam Lamont.

See all of our recent Games articles here.

No idea why comments were off on this page… Sorry about that!

Sweet shoggoth in the morning,

The PDF version is available from Chaosium’s website, but you have to dig a little due to Chaosium’s habit of adding the newest PDFs to the end of the list.

Go to Chaosium’s Homepage and click on Call of Cthulhu RPG under Product Lines at the top left of the page. On the menu that opens click on “Digital (PDF &ePub). That takes you to the list of PDFs; the 7th edition books are on the last page, page 8.

I was a backer of this Kickstarter, so I’m not an impartial observer, but I think they did a heck of a job.

This makes me want to play it!

John — thanks for the tip!

Grrr, I wish Chaosium made the PDF versions just a tiny bit easier to find.

Methinks, IMHO, the Investigator Handbook cover pays awesome homage to the AD&D Player’s Handbook… it’s a fantastic work in it’s own right, but couldn’t you just see an intrepid investigator going to pry a jewel from the slumbering god statue? …need to get those books in my hot little hands(!)

It’s just the greatest system ever – you can do so much with it. I one participated in a game set in the 20’s where everyone played a actual person alive in that era: George Patton, Harry Houdini, Amelia Earhart, Ty Cobb, and Jack Johnson. What a blast!

> Methinks, IMHO, the Investigator Handbook cover pays awesome homage to the AD&D Player’s Handbook… it’s a fantastic work in it’s own
> right, but couldn’t you just see an intrepid investigator going to pry a jewel from the slumbering god statue?

OMG… I don’t know how I didn’t notice it myself, but you are absolutely right. I’ll never look at that cover the same way again!

> I one participated in a game set in the 20’s where everyone played a actual person alive in that era: George Patton,
> Harry Houdini, Amelia Earhart, Ty Cobb, and Jack Johnson. What a blast!

I played The Masks of Nyarlathotep the year after it came out (1985), and that was extraordinary. It deserves the acclaim it’s received as one of the finest RPG adventures ever written.

>John — thanks for the tip!

My pleasure; I’ll drop Chaosium a line about your article. I’m sure they will appreciate your compliments; maybe they’ll even do something about making PDFs more accessible.

I would also like to thank you for your kind words regarding Chaosium’s RuneQuest Borderlands campaign back in July; something I made a small contribution to, a long time ago.

I just received an update from MOB at Chaosium regarding your concerns about the accessibility of the Call of Cthulhu 7ed PDFs.

John — thanks for the update! I received a note from Michael O’Brien, VP of Chaosium, with the same info. Sounds like the team at Chaosium is nicely on top of things.

Here’s the complete text of the note from Michael:

Michael O’Brien, VP of Chaosium here. I just saw your recent article about
Call of Cthulhu 7th edition. Many thanks for the kind words!

At the end you mentioned about being unaware how to get hold of the Call of
Cthulhu 7 PDFs.