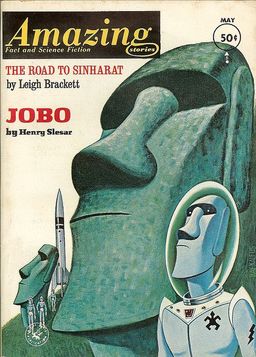 This is one of the best issues of Cele Goldsmith’s Amazing I’ve encountered. Only four stories, but all decent, one really good.

The cover is by Ray Kalfus, illustrating Henry Slesar’s “Jobo” in a fashion that gives away one of the story’s secrets (not that it’s that big of a secret). Interiors are by Leo Summers, George Schelling, and Virgil Finlay.

The New Yorker magazine, which normally does not care to admit of the existence of such a literary form as science fiction (probably because sf stories have plots with beginnings, middles, and ends, which the New Yorker fiction editors abhor)…

Plus ça change! The occasion is an approving New Yorker review of Arthur C. Clarke’s Tales of Ten Worlds, and in particular their praise for the story “Before Eden,” which was first published in Amazing in 1961.

“… Or So You Say”, the letter column, is mostly occupied with complaints about a letter in the January issue from Lorne Yacuk, which apparently complained about the “new” type of stories published in those days, particularly that they featured dull “common men” instead of “supermen.” The writers are James C. Pierce, W. D. Shephard, and Gil Lamont. In addition, Paul Gilster (from St. Louis!) praises Albert Teichner’s “Cerebrum” (mentioned in these reviews some time ago).

The Spectroscope, S. E. Cotts’ book review column, covers The Space Child’s Mother Goose, by Frederick Winsor; Moon Missing, by Edward Gorey; They Walked Like Men, by Clifford Simak; and Anything You Can Do…, by Darrel T. Langart (Randall Garrett). The only one he really approves of is the Simak.

There are two “fact” articles. One is called “A Soviet View of American SF,” by Alexander Kazantsev. It’s a reprint (translated by John Isaac) of the introduction to an anthology of American SF published in the Soviet Union. The author (Kazantsev) is said to be famous for suggesting that the Tunguska event was caused by the explosion of a Martian spaceship. His views of the stories mentioned are politically tinged to the point of parody. The other article is by Ben Bova, “Where is Everybody?”, and it’s a look at the Fermi Paradox. 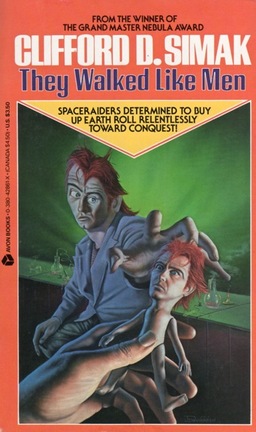 Henry Slesar (1927-2002) was a reasonably well-known writer, of plays, mysteries, and SF, mostly in shorter forms. But he was far more successful in another writing field: Soap Operas. He was the head writer of The Edge of Night for a long time, and an Emmy winner. He also worked at other soaps, and spent some time in advertising. His best known SF story is probably “Examination Day.”

He appeared fairly regularly in Amazing and Fantastic, even before Cele Goldsmith took over. “Jobo” is a pretty decent story. It’s “surprise” isn’t much of one, and is given away by the magazine’s cover anyway. Jobo is a young man in backwoods Tennessee, a remarkably strong man, very thin and very tall, with an unusually shaped head, and much made fun of by his fellows. His story is interleaved with that of an archaeologist who has a strange pet theory about the statues on Easter Island: that they represent alien visitors.

In one track we follow Jobo as his mother dies, he inherits a strange artifact from his long-dead father, and he gets in trouble when a wrestler picks a fight with him and Jobo hurts the man. In the other track we follow the archaeologist as he makes an expedition to Easter Island with his rather careerist younger colleague (who may be humoring him because he is interested in the archaeologist’s beautiful daughter) … but on the island they find a cave with some fascinating artifacts, one in particular which resembles Jobo’s. The resolution turns on the intervention of the archaeologist’s daughter in Jobo’s court case, and Jobo’s coming to understand his heritage. We’ve all guessed that, of course, and the conclusion is a bit of a disappointment as it becomes pure exposition. Still, nice work.

Albert Teichner published about 20 SF stories, most for Cele Goldsmith between 1960 and 1964, with a few more in the ’70s in F&SF and Orbit. I can find nothing else about him — I don’t know his dates or his main career or where he was from. The stories I’ve read are not bad: in particular they usually have fairly interesting SFnal ideas. “The Right Side of the Tracks” has a spaceship from the Galactic Glia — the union of human worlds colonized from Terra — coming to Nodar. For some reason Nodar has had no contact with the rest of humanity for some time. As they land, they find the locals still mostly uninterested, and even when they greet the visitors they seem to give them only a tiny amount of attention. All this is made worse by the terrible attitudes of the captain and most of the crew, except for Linder, the Chief Semanticist. So it is Linder who is vouchsafed an explanation — which is readily enough guessed, and if not quite believable, it’s interesting enough.

Robert F. Young’s “The Deep Space Scrolls” is just what you’d guess: an artifact is found in deep space, which the astronauts who find interpret to be direct evidence that Earth was colonized by people from another planet, and that the Bible stories, read properly, provide further evidence of this. The story is presented as a Congressional interrogation of one of the astronauts, and the various Senators have, naturally, varying reactions. I have to say, I wasn’t convinced by any of it. A decidedly strained performance.

And finally, the real gem of this issue: “The Road to Sinharat,” by Leigh Brackett, one of a pair of stories she wrote in the early ’60s that seem to represent a sort of farewell to SF. (Of course, she did return, in the ’70s with the Skaith novels.) This is set on Brackett’s glorious Mars, where indeed such Eric John Stark stories as “Queen of the Martian Catacombs” (Planet Stories, Fall 1949; expanded (reputedly by Brackett’s husband Edmond Hamilton) as The Secret of Sinharat (Ace, 1964)). (Hamilton also reportedly expanded another Stark story, “Black Amazon of Mars,” to become People of the Talisman, published as the other half of an Ace Double with The Secret of Sinharat.)

“The Road to Sinharat” is not a Stark story, though its Sinharat is the same as the Sinharat of The Secret of Sinharat, and both stories also mention the city of Valkis, and conflict between the Martians of the city states and those of the Drylands. The hero of this story is Dr. Carey, a Terran scientist, expert on Mars, who is wanted by the United Worlds Committee because of his opposition to the UW’s plans to Rehabilitate Mars (i.e., terraform it to some degree), which he believes will be an ecological disaster, particularly for those who live in the Drylands.

Carey comes to an Derech, a Martian who owes him for a past deed, a Low Canal resident, and Derech hides him from his pursuers, then agrees to help him make his way to the dangerous abandoned city, Sinharat, where Carey believes there is evidence that will convince the Terrans of their mistakes. The rest of the story follows Carey and Derech and Derech’s girlfriend Arrin, by canal and then by land, to Sinharat.

It’s great fun, pure Brackett to my mind (some have wondered if Hamilton also had a hand in this story, presumably written about when he was working on The Secret of Sinharat and People of the Talisman, but I think this is all Brackett). It’s got the Brackett romantic touches, and an ecological and anti-Colonial theme that is well argued, I think, and plenty of excitement as well. It hasn’t been neglected (it was reprinted in her collection The Coming of the Terrans) but it seems less well-known than it might be.

Rich Horton’s last Retro-Review for us was the third issue of Gamma magazine from 1964. His website is Strange at Ecbatan

Thanks for taking the time to write up this issue is such detail.

While Henry Slesar was a very big deal in soap opera scripting (and THE EDGE OF NIGHT during his long run was apparently the most popular soap with men…it was a crime drama to a much greater extent than other soaps..and, with DARK SHADOWS, was one of only two network daytime soaps to get a notable syndicated broadcast repeat package after cancellation…), he was a rather big deal in crime-fiction before that…highly prolific, first novel got the first novel Edgar Award, and I believe he was the most productive scriptwriter for the ALFRED HITCHCOCK PRESENTS: tv series, among other tv work, before taking on EDGE. He had been one of the yard-goods writers for Paul Fairman’s AMAZING and FANTASTIC (where Cele Goldsmith learned what not to do as Fairman’s assistant, as well as her going through the slush to find some of the decent fiction Fairman’s issues would publish, such as Kate Wilhelm’s first published story, “The Pint-Sized Genie”) along with Silverberg, Garrett, Ellison, and Milton Lesser/Stephen Marlowe. He and Ellison collaborated. (Pronounced “Slay-sir”.)

Amusing that the letterhack makes essentially the same complaint, with slightly different emphasis, about Goldsmith’s choices at AMAZING as Lobsenz is making about stories in THE NEW YORKER. Plus ca change, indeed. I’m not sure folks might’ve caught your drift, if you were drifting that way, that Paul Glister has remained an active and voluble fan; Gil Lamont went on to a career in comics, mostly.

Albert Teichner took part in at least one other Notable Moment in magazine sf and fantasy, as one of the “hawk” signatories in the two statements various speculative fiction people signed on to 1968…Kate Wilhelm and Judith Merril put together an ad opposing US involvement in Vietnam, and pro-war folks got equal space in ads published in THE MAGAZINE OF FANTASY AND SCIENCE FICTION and GALAXY. Leigh Brackett was another hawk. Slesar was one of the “doves”…the ads can be seen here: http://socialistjazz.blogspot.com/2012/02/1968-judith-merril-and-kate-wilhelm-put.html

Sounds like yet another Robert F. Young story I’m glad not to have read. Glad you found a good issue!