Well, the answer to that is 12. And, considering how iconic each one is, how much they meant to D&D players in the 1980s, and how many folks still use these books 30 years later, it is little wonder that this was a much harder list to trim down than one might think. But, I’m going to give it a shot nonetheless!

So I essentially started with the concept that I’d fold in overall book importance to game play, but then decided against it, instead relying on nostalgia for the cover alone. This would be tempered by the fact that the three most beloved and used books in the AD&D series are the Players Handbook, Dungeon Masters Guide, and the Monster Manual, which were all re-released with different covers in the late 1970s, so a lot of players prefer those versions to the more uniform Easley editions produced in the 80s.

Still, TSR sold a boat load of these books during the initial days of the 80s, so I know Easley’s covers did introduce a good deal of players to the hobby (and likely more in the 2nd Edition cover he also did). My first DMG and PHB were Easley covers, so he was my ‘gateway drug’ so to speak and all his ‘orange spine’ hardcovers still sit proudly behind my desk for easy access since I use them almost daily.

I hope those reading this will remember these books as fondly as I do, and perhaps, want to see another one produced to make it thirteen ‘orange spines’ in total, but I’ll talk about that later. Until then, enjoy this beautiful fantasy art Top 10. 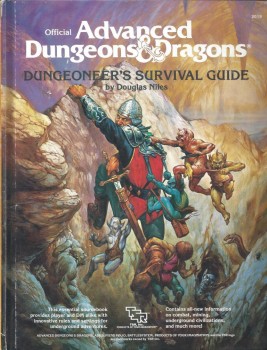 #10: Dungeoneer’s Survival Guide: Jeff told me once he had painted this one before he even came to TSR but they decided to buy it and use it for this cover. Therefore, for all of you who have tried endlessly to figure out what each creature on the cover is, should realize they don’t necessarily ascribe to ANY D&D type monster or race. Lord knows, however, I’ve tried my hardest to make the little dude with the dagger a really tiny halfling for years! I do love the underworld feel of it though, and I always wondered if this dude was going to make it out of there. Another feature is the serpent below, and I’m thinking poison might also be in the future for these two, unless the little knife guy gets the initiative on that snake. 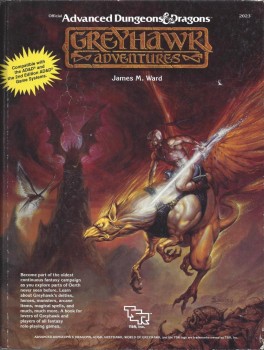 #9 Greyhawk Adventures: I believe this was the final book in the ‘Orange Spine’ series, but I’ve always been a fan. I mean, who doesn’t like a ultra-demon looking thing and a griffon rider with a magic sword? I’m really not sure, however, just what part of Greyhawk this would take place in. If anything, it kind of looks like it should be planar image, but I guess a great one of those was used elsewhere so they just went with this. 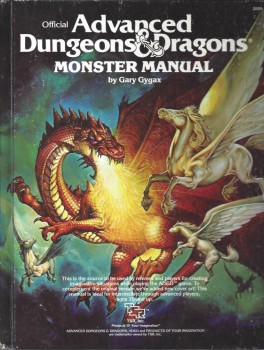 #8 Monster Manual: Classic! Red Dragon fighting Pegasi in an air duel? What isn’t to love about this one? I know many and many again were very taken with the above and below Monster Manual 1st Print by Sutherland III, but I heard a story once that a boatload of old TSR art was taken out of the archives and thrown onto a break room table as ‘up for grabs’. Sutherland, who hated that painting, just left it there, only taking his DMG cover instead, so even the artist wasn’t fond of it. 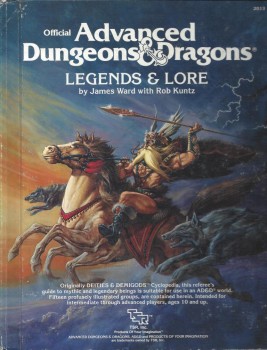 #7 Legends & Lore: Well, it is hard to recover an Erol Otus, but this image of Odin is probably one of the best you will ever see. Jeff truly knocked this one out of the park in my opinion. I was recently reading that Sweden had reinstated the Norse Pantheon as an active religion, which makes me very happy since my son seems to venerate them all with such glee, along with the Greek and Egyptians respectively. I guess, like me, he was inspired by some of the images in there great books because I certainly built my work around them. 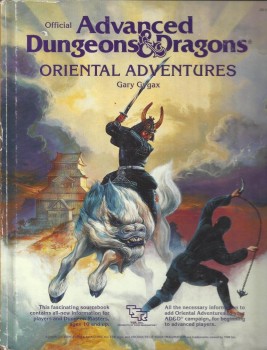 #6 Oriental Adventures: I’m guessing that if there is one book on this list a lot of folks don’t own, it is this one, but that doesn’t mean this kind of epic ‘in the clouds’ duel between a samurai and a ninja isn’t worth every penny! I was so taken by this book when I first got it that I took it into the tub with me, promptly got it wet, and have then had to suffer the consequences for the remainder of my days. Still, how can you not love the light work in the clouds on this one? 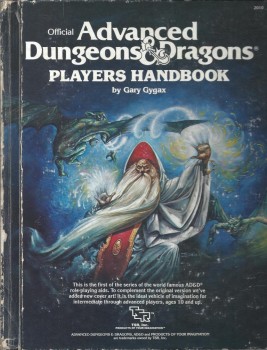 #5: Players Handbook: Sure, you aren’t going to top Trampier’s version, but nonetheless, for many players who didn’t start D&D in the 1980s, THIS is their Players Handbook, and many of us have imagined this fantastic fight as we sat around a gaming table. My friend Brent knows the name of this particular wizard, and I think he also has a lead miniature set this has him as well. Always cool when your work can inspire other artists to develop things around it. Reminds me of Jeff’s work being used for the Vanguard MMO. 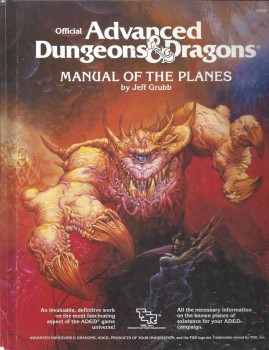 #4 Manual of the Planes: Ethereal Dreadnaught… enough said. Well perhaps not truly ‘enough’, but you get the idea. The moment I saw this nasty creature, which of course has the distinctive ‘Easley Slime’ around its mouth, I knew I had to go to the planes. However, in all my years of adventuring in them I’ve yet to run into one of these beasts, although that might not be something to complain about, right? 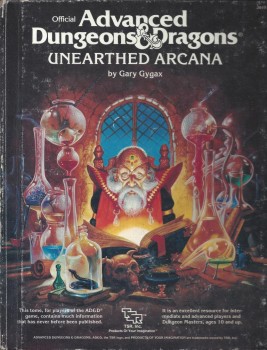 #3 Unearthed Arcana: Truly one of the most iconic wizard images EVER! How many times has this been ripped off? Probably about half as many as the Trampier PHB, but still, it just never gets old. As this is by far my favorite ‘orange spine’ hardcover for the purposes of actual game use AND it was really my first rules addition set that I got upon release and not years after others had played it, I have to say that the Unearthed Arcana is really a book after my own heart. 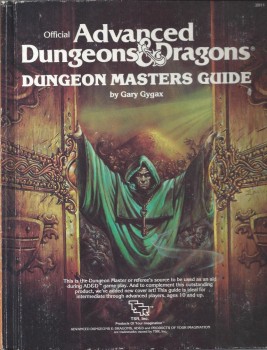 #2 Dungeon Masters Guide: Now there might be some controversy with this one coming in at #2, but that is where I’m putting it. Not taking anything away from EVERYTHING THAT THE DM IS and how well Jeff represents it here, but I still believe when many folks think about an ‘orange spine’, they are going to remember #1 first, because at the end of the day, this a a re-cover, and half the folks out there are going to be about the Sutherland III edition. 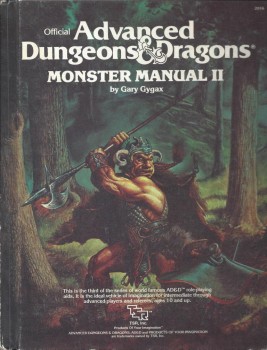 #1 Monster Manual II: Jeff’s first ‘Orange Spine’ and first hardcover AD&D work, and it absolutely takes it to church. If you haven’t sat around wondering A: if this a a hill giant or and ogre lord and B: if this poor bastard fighter is going to live, then you aren’t a D&D player. Truly, one of the greatest masterworks to ever grace a gaming product.

So that concludes this little adventure into the past, but don’t forget, if you like Jeff’s covers on ‘orange spine’ books, I hope you’ll have a look at The Complete Roslof Keep Campaign Kickstarter which will mirror these great books so after 30 years you can add another to your collection! Art of the Genre would love to have you on board! You can find it here.

Hopefully somebody gets that reference.

OK, which one is missing?

Ah! I was trying to figure out if he’d ever done an alternate cover for the Fiend Folio or something. (Did 1e FF ever get something other than the blue cover?)

The days of good covers and bad bindings.

The funny thing is, all my orange spine books other than the DMG never had binding issues.

I am lucky enough to have a copy of both the original Sutherland DMG and the Easley DMG.