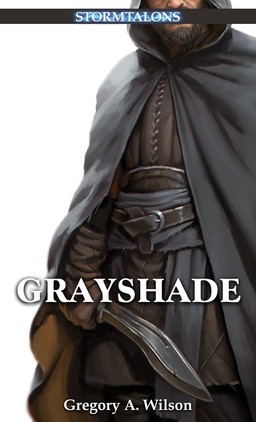 Servants of Argoth maintain balance in the world by meting out justice; sometimes, that justice can only be obtained through death. That’s where the Acolytes — some call them assassins — come in. Grayshade and his brethren receive assignments from Father Jant, the head of the order, who is guided by Argoth’s will.

When Grayshade receives an assignment to kill Lady Ashenza, a member of the government of Cohrelle, he accepts it as a matter of course. Being a power broker in the local government isn’t why she’s been marked for a hit, however. She’s also rumored to be a part of the Vraevre, a religious sect that in recent weeks has begun to assassinate Cohrelle political figures. In order to restore balance, she must die, and Grayshade is sent to do his duty.

However, when he enters her room, Lady Ashenza tells Grayshade that she isn’t a threat to him or his order; no, the real threat is the Order of Argoth itself. While this gives Grayshade pause, he does complete his mission. During his exit, he spots another Acolyte near the Ashenza home, and he soon realizes the evening’s events are more complicated than they appear. Before long he questions everything he’s ever been taught, and soon realizes he can only trust himself.

Grayshade by Gregory A. Wilson has everything I love in a fantasy novel: a fully-realized setting, complex characters with hidden motivations, political intrigue, and a touch of humor. As I read, I felt the clay-tiled rooftops beneath my feet and smelled the stench of garbage in alleyways. By the end of the first few chapters, Cohrelle felt very much like a real city with a life of its own.

While this novel is written in the first-person point-of-view (a point in its favor, in my opinion), Wilson gives us ample reason to love or hate several secondary characters: Caoesthenes, Grayshade’s mentor; Father Jant, his afore-mentioned boss; Rumor, an informant-about-town; Caron, a boy with Buddha-like serenity; and Rillia, a former Acolyte and a promising love interest for Grayshade. Wilson makes each of them interesting in their own right.

The political intrigue announces itself in the first chapter and weaves itself through every page. While I don’t want to give too much away about this aspect of the book, I will say I wasn’t quite expecting what happens at the end, and I’m looking forward to how these revelations play out in subsequent books.

Grayshade adds depth to these elements by giving us a hero (or is it anti-hero?) who, over the course of the novel, begins to think for himself. Is there a more dangerous person than one with a deadly skill set and nothing left to lose? I think not. A cover blurb suggests this novel is “Jason Bourne meets Assassin’s Apprentice.” While that’s an accurate statement, I suspect the subsequent books will add “Liam Neeson in Taken” to the list. It’s by turns gritty and thoughtful, nuanced and blunt, poetic and raw.

If “hooker-with-a-heart-of-gold” is a romantic comedy trope, then surely “assassin-with-a-conscience” is the speculative fiction equivalent. Wilson gives us that and much, much more. This first novel of a planned trilogy is worth your time.

Also, this is the first I’ve heard of this Onder Librum collective thing… I think that could be an interesting Black Gate article!

I’m intrigued. /adds to to-be-read list, which sadly does not mean it will get read.