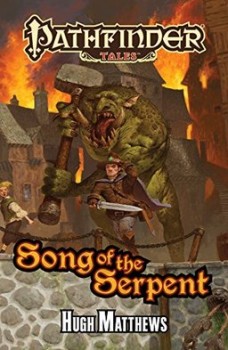 The woman looked over at Krunzle, who was making sure no morsel of the meal escaped his needs. “What of you, errand-runner? Do you know much of where we are heading? Or anything, for that matter?”

The thief returned her a level gaze. “I know who I am and what I can do,” he said. “I find that usually suffices.” He arranged a piece of fish on a crumb of bread and popped both into his mouth.

from Song of the Serpent

I have read only a tiny fraction of Matthew Hughes’ prodigious output. What I have read, his Jack Vance-inspired stories of the Purloiner Raffalon, I like very much (see my reviews here, here, here, and here). Those four stories, plus five others, will be collected and released next year. I can safely write that that will be an immediate purchase for me.

A few weeks ago, when he posted about a novel he wrote back in 2012 for Paizo’s Pathfinder Tales, I was intrigued.

Back in 2008 at World Fantasy Convention in Calgary, I was in the bar when Erik Mona, publisher of Paizo Books, told me he was a great Jack Vance fan and that he liked my work. He asked me if I had a book for him. As it turned out, I was looking for a publisher for Template, my stand-alone Archonate space opera that had been brought out as limited collector’s editions by PS Publishing.

I sent it to him and he brought it out as part of the series, Planet Stories, which (like Template) were decidedly retro science fiction.

Later, Erik told me that he also published novels set in the Pathfinder RPG universe’s world of Golarion, and asked me if I would be interested in doing one. He also said he would really like it if I would do a Cugel the Clever story. I love the Cugel stories and said I’d be delighted.

So we made a deal and I wrote a novel originally called Out of the Blue that was retitled Song of the Serpent before publication in 2012. It told the tale of a thief named Krunzle the Quick who, like Cugel, is fast on his feet – he has to be because, again like Cugel, he’s not as smart as he thinks he is.

I will say right up front that I am wary of tie-in novels. While I’ve read and enjoyed a few Warhammer 40,000 books, I was seriously scarred by the early Dragonlance novels back in the mid-1980s. My fear of tie-in books is based on the assumption that as works-for-hire, they just aren’t going to be as compelling as original ideas. And there are tons of wholly original works on my always growing, never shrinking TBR stacks. However, when a writer I really like says he has basically written a Cugel pastiche, I’m going to give it a go.

Written under the pen name Hugh Matthews, Song of the Serpent (2012) opens with Krunzle the Quick searching for the one place in the city of Kerse that he can rob. The Kersites are wealthy and protect their wealth with a variety of safeguards, magical and mundane. Unfortunately, Krunzle is neither as quick nor as clever as he envisions himself, and when he starts to steal gems hanging from a tree, he falls victim to a trap laid specifically for him.

The satchel, like the hat, was soon filled. Krunzle had not even exhausted the low-hanging bounty of the trees. If I remove my cloak, he thought, I could pile more jewels on it and fold and tie it into a bundle. He did so, flapping the cloth to lay it on the ground. Then he made to climb upon the lip of the pot, the better to reach higher.

And he found he could not. Though he willed his feet to lift, they would not. Nor would the muscles of calf and thigh flex. Krunzle looked down and saw, through the flashing of reflected spots of light, that his lower limbs, to a height of halfway between knee and hip, were wrapped around with roots as thick as his wrist. As he watched, the thin ends of the fibrous material extended themselves, winding around his thighs to reach ever higher. 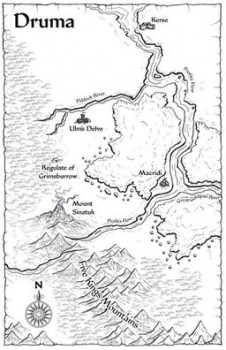 Behind his entrapment is the wealthy Kersite, Ippolite Eponion. His daughter has fled the city in the company of a soldier. The soldier absconded with, in addition to Eponion’s daughter, a magical item. Now Eponion wants someone possessing Krunzle’s skill set to return his daughter and his property. He ensures Krunzle’s compliance by securing round his neck a magical sentient torc named Chirk, forged in the shape of a snake, that will slice off his head at the first attempt to avoid the task at hand. This setup, quite intentionally I imagine, is reminiscent of Jack Vance’s Eyes of the Overworld, wherein Cugel the Clever has a task set to him by a wizard he tried to rob, and a liver-gnawing demon inserted inside him to encourage his obedience.

Equipped with a magical sword and ensorcelled boots capable of leaping strides, and directed by Chirk, Krunzle follows the trail of the magnate’s fugitive daughter. As is the nature of such quests, the trail leads the thief straight into trouble. Soon he is facing rogues more deadly than himself; then the denizens of a gold mining town and its boss, a figure so brutal and corrupt he could have stepped right out of a Dashiell Hammett story; then he meets a young troll, imprisoned and enslaved, and ripe for a bit of cajoling by Krunzle.

It’s through that point that Song of the Serpent best echoes Jack Vance’s work and is most successful. The things that make the Cugel the Clever stories so intoxicating are Vance’s unfailing ability to create novel and bizarre episodes, his musical droll prose, and barbed dialogue where characters loop around each other or couch the most brutal things in great politeness. Hughes delivers all these things in the book’s first part.

Though a reprobate thief, Krunzle is possessed of a certain low cunning and charisma that make him, if not exactly charming, engaging. He is at center stage for the first part of the book, and with color and wit Hughes brings him to life. Outmaneuvered by powerful men who possess fewer scruples than himself, Krunzle becomes almost sympathetic. Krunzle should be nobody’s idea of a hero, but in a world of suffering and dastards he makes an almost admirable job of standing on his own (even if by theft and con artistry).

Drained of life-essence, Krunzle tries to wrangle a respite before being sent on his quest:

“Wait,” said Krunzle, “I am not fit for a journey. I have been up all night being fed to trees and forced to perform feats of strength and dexterity. I suggest I retire to a well-made bed for several hours, then fortify myself with a good breakfast before going down to the docks and boarding the next packet upriver.”

Thang-Sha smiled an unpleasant smile. “Your plan is rejected. You will find that servants of Kalistocrats and Tian wizards address themselves to their duties with commendable briskness.”

“Just so,” the Kalistocrat concurred. “I tolerate no lackadaisicality. You may rest when your labors are completed. And to my satisfaction.”

“Very well, said the thief, “there remains only the question of the reward for my inevitable success.” He named what he considered an appropriate figure.

It was received with a routine expression of horror and disbelief from Eponion, while the wizard composed his features into a mask of sardonic amusement.

We learn Krunzle is man with a clear vision of how to live his life:

Sluice-mining was an effective means to quick riches, the traveler knew, if you happened upon a deposit of slush-sand and gravel that had been accumulating washed-down gold since the gods first made the world. Otherwise, it was just a way to break your back and your spirits. The thief preferred to let others find the riches, consolidate them neatly, then look the other way while Krunzle the Quick scooped them into his pouch.

When his efforts to sway a troll to his cause appear effective, Chirk asks Krunzle:

Where did you learn about trolls? the snake said.

I know nothing about trolls in particular, said the traveler, but I know what it is to be young and seeking for a place in an uncooperative world. Don’t you? 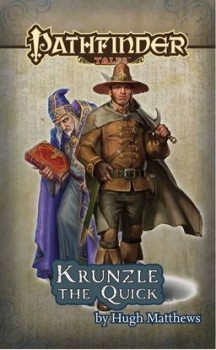 Unfortunately, it’s shortly after this point that Song of the Serpent becomes a different sort of book, and one I enjoyed less. Krunzle is no longer the sole focus of the story, and he is accompanied by a quartet of other characters. Once the thief’s voice became less dominant, a certain joy fled the book. The Vancian picaresque storytelling is replaced with a more mundane fantasy quest interspersed with battles between dwarves and orcs. The nature of the quest, as well as its resolution, is interesting, and if the first half of the book had been different I would have liked it better. Instead, the book feels like two very different ones joined imperfectly into something that’s neither fully one thing nor the other.

This is by no means to say the novel’s second part is bad. Hughes is too good a writer to allow that to happen. A slowly revealed mystery, strange premonitions, and ancient terrors, together create and solid story. The four individuals who accompany Krunzle are well drawn and could easily be the heroes of their own tales (especially Skanderbrog the Troll). Their stories, though, are more serious than Krunzle’s. A very funny book mutates into a more earnest, if still intriguing, one. Also, it feels too much like a game session, its single protagonist replaced by a party of adventurers. I was left wondering if Paizo or Hughes believed people reading an RPG-related book would reject a story consisting of loosely connected escapades and instead need a big quest to be satisfied. If that’s the case, I wish they had been a little more trusting.

If I wasn’t ultimately completely satisfied with Song of the Serpent, I did love my time spent with Krunzle the Quick. He’s possessed of a quirky charm and insightful cynicism that make him more than agreeable company, and I had a ball watching him wriggle out of various, mostly self-inflicted, contretemps. I haven’t read it yet, but there is a prequel story Hughes wrote to promote the novel, and I’m looking forward to it. It’s available to read at Paizo’s site

This has not put me off the Pathfinder novels. Golarion is a fun setting, clearly with plenty of room for all sorts of adventuring and storytelling. I already have two of Howard Andrew Jones’ sojourns there in that TBR stack I mentioned earlier.

This might tempt me to pick up a Pathfinder book. I love Hughes’ Archonate stories.

@Jeff – I need to read some of the Archonate stories. The Raffalon stories I’ve read are just so dang good.

I need to read some stuff by this “Hugh Matthews” fellow.

I’ve read the first half dozen or so Pathfinder novels, and while they had their ups and downs, I was never less than entertained.

Fletcher, one of the many things I love about his Archonate stories is his use of made-up words that both fit perfectly into his far-distant universe and are immediately understood by me. It gives the stories a very “not now” feeling while not slowing down my reading one bit.

Hopefully that’s a skill that he finds useful in fantasy.