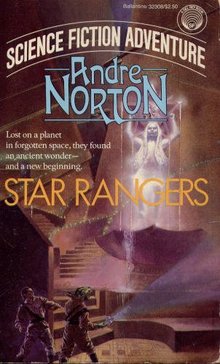 It’s been my experience that Andre Norton is extremely popular among women of my generation, those who grew up reading SF when there were few women writing, and even fewer female protagonists. When I was looking at Norton’s Witch World last time, I found myself wondering whether this popularity was due to how Norton feminized her male protagonists, making them easier for female readers to relate to.

Even the positive qualities they may have are somehow the very things that set them apart, and define them as “other.” These are invariably qualities that the standard norm don’t wish to have, even though they’re demonstrably useful.

In Star Rangers Kartr, although a member of the Patrol, is a second class citizen, as are all of the Ranger class of combatants. In fact, he’s excluded from the class of regular Patrol in a number of ways. Even though he’s human, he’s from a frontier world, and is therefore a “barbarian”; he’s a “sensitive” in that he has certain mental abilities which can include telepathy – and it’s significant that this valuable ability is either distrusted by those who believe in its existence, or simply denied by those who don’t. Lastly, he’s a “bemmy lover”* in that he doesn’t join in excluding his nonhuman comrades from social or political status. 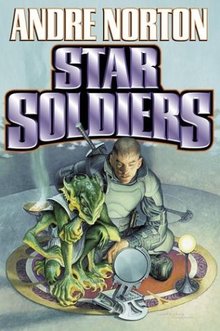 Even though it’s implied that other races might be morally or intellectually equal, or superior to humans, the top dogs in this novel are humans, and it’s they who impose the social and political hierarchy, including all its bigotry and racism.

This is not the case in Star Guard (now apparently called Star Soldiers) where it’s humans as a race who are the “other,” considered by older and more established races as inferior, primarily because of their natural levels of aggression. Humans are used as mercenaries by those who need military help, and are only allowed into space on that basis. Otherwise, they have no status. Unlike in Star Rangers, where the status quo was more-or-less accepted philosophically by those who suffered from it, in Star Guard humans chafe against their subjugation, and look for ways to get a better deal from the elder races.

Norton’s protagonists always triumphs, but it’s from an initial position of weakness brought about not by the specific circumstances of the plot, but by the prevailing socio-political conditions. The heroes not only solve the problem/conflict of the plot, they also gain significant status, in the form of social acceptance, respect and equality.

Just as a point of comparison, I’d like to refer you to Tanya Huffs’ Confederation Novels, particularly Valor’s Choice and The Better Part of Valor. As in Norton’s Star Guard, Huff’s humans, along with a variety of other, “young” species, are second-class citizens, allowed into space as soldiers only because the Elder Races need someone to fight a war for them. Otherwise, they’re excluded from full citizenship – they don’t have the vote, for example. 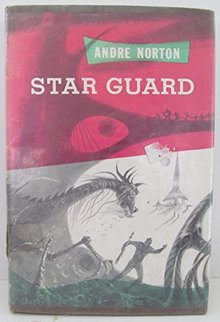 There are many differences between Norton’s and Huff’s work, of course, but for the purposes of this discussion, the most significant is that Huff’s protagonist, Torin Kerr, is not only female, but she does not see herself in any way as a victim of social forces. She does not consider herself, her species, or her fellow “younger races” as in any way inferior to the Elders. On the contrary, they see themselves as performing a necessary task (there is an actual invasion going on, which puts every species at risk), and in fact tend to look at the Elder Races with a touch of amused, if sometimes exasperated, toleration. There is no sense of gender “otherness” in Huff’s novels.

By the way, Huff confesses to being “a HUGE Norton fan” though she didn’t have Star Guard specifically in mind when she began the Confederation Novels. Those of us familiar with Valor’s Choice, for example, are already aware of the primary influence for that book.

*I didn’t know at the time I was first reading these books that “bem” stood for “bug-eyed monster” and was the SF world’s slang for “alien.” In Norton’s novel, it stands for whatever racial epithet you care to assign to it. It’s the ultimate expression of bigotry. Kartr is the feminine “other,” that is, he’s human, but of an inferior class, while the other humanoids are clearly the racial “other,” that is, not human, excluded even from the privileges of lower class humans.