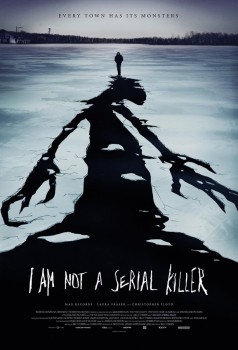 I am not particularly active on Twitter lately, but today I had a bit of time and hopped on, only to see the following headline shared by Dan Wells:

The tweet included a link to an LA Times review of the film I Am Not a Serial Killer which, according to IMDB, is set to release tomorrow, on August 26. Another review, over at the A.V. Club, proclaims “Psychopaths are people too.”

Despite being fond of Wells’ horror novel of the same name, I had no idea this film was on the horizon, and am definitely pleased to see it getting initial praise. If you want to really get a taste for what to expect, I suggest the fantastic trailer for it. (If you want to see the movie, check the bottom of this article for links, which I’ll update if I find more online availability after it is released. Feel free to skip there, if you have seen enough and want to avoid spoilers.)

The movie is based on the novel of the same name, which has gone on to spark a number of sequels featuring the main character, teenage John Cleaver, who is also a diagnosed psychopath. John’s fear is that his psychopathic urges will get the better of him, and that he will lose control of himself. To prevent this, he studies serial killers intently and has developed a series of rules that are designed to maintain his veneer of normalcy. One of the rules shown in the trailer, for example, is that when he feels an urge to kill someone, he instead compliments them. (A tip that is also helpful when maneuvering social media.)

John works in his family’s mortuary, which gives him some release for his interest in death. But he gets more than he bargains for when a series of murders in his quiet down prove to be the work of an actual serial killer. John’s expertise in this area leads him to discover who the serial killer is, and it turns out the police are not equipped to deal with the menace. In attempting to deal with things the “right” way, John finds events slowly becoming worse. He is forced to step up, breaking his own rules, and slowly getting in touch with his own darkness in order to combat the killer that threatens his community.

And that’s when things start getting really bad.

I could go on to discuss the nature of the menace, but I’ll leave that to the reader to stumble into. The one real spoiler I will offer is that John doesn’t die… as evidenced by the numerous sequels in the John Cleaver series. In good horror, of course, as in life, there are fates much worse than death.

Though the main character is a teenager, these books are definitely not written with an exclusively “young adult” bend to them, and should be enjoyable to anyone who likes horror/thriller novels. The film looks good, but I find it hard to imagine that it will be better than the original novel. Here is the full slate of the John Cleaver books by Dan Wells, in order, for your consideration:

If you find Dan Wells’ storytelling to your liking, I also recommend the Writing Excuses podcast, of which he is one of the co-hosts.

Where to Watch the Movie

But where can you see the film version of I Am Not a Serial Killer? Well, there’s the rub. The review indicates that it is showing at “Arena Cinema, Hollywood,” and checking the official I Am Not A Serial Killer Twitter feed led to this post with US dates, including a tomorrow showing in New York City. Furthermore, IMDB indicates that the release will be both “limited” and that there will also be an “internet” release … which, it appears, includes rental availability on VUDU and also Amazon Instant Video. I’ll update this if I can find more places it is available online once released.

The movie was at Fantasia this past year. I didn’t see it, though I cannot now remember why. But I heard afterward from people who did. Everybody liked it quite a lot.

I don’t think I’ve heard anything about this. Did Wells ever mention it on Writing Excuses?

When I heard about it, I vaguely remembered him referencing that someone was making a film or that it had been optioned, but I don’t remember any specifics on when to expect it.

Heck, they shot it in a somewhat larger small town 50 miles from me. Watching trailers is a regular thing for me. How did I not know about this movie?

It’s rare for a horror story to grab me, but this one does. I’ll try the novel first, though. My experience of horror films usually comes down to poking my own amygdala with a stick. My loss, I know. If the novel’s awesome enough, I may make an exception for this film.