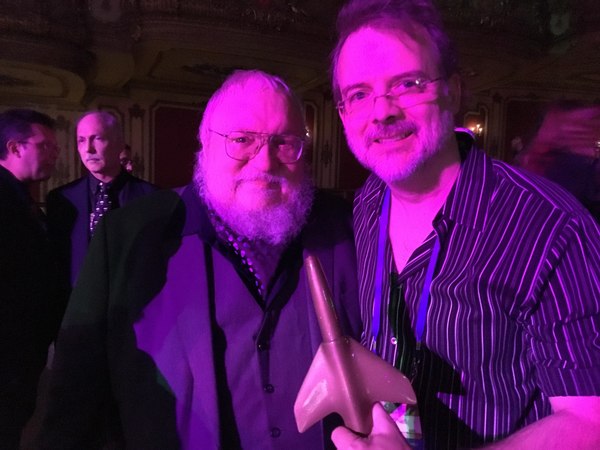 Yesterday, while I was walking through the crowded halls of Worldcon in the Kansas City Convention Center, I was given an invitation to the Hugo Losers party, courtesy of the party’s distinguished host, George RR Martin. I was quite flattered, as Black Gate was not even up for a Hugo (we declined the nomination, as we did last year, to make room for another nominee on the ballot), but didn’t think much more about it.

The Hugo Losers party is the hottest ticket of the convention, as I soon discovered. George personally hands out the Alfie Awards to those Hugo losers whom he feels (quite rightly, I think) were unjustly robbed of an award by slate shenanigans. And this year he spared no expense to do it in style, renting out the Midland Theater, hiring a band, and plying hundreds of guests with fabulous food and drink. The Awards themselves are gorgeous, constructed of vintage hood ornaments, in honor of the design inspiration for the first Hugo Awards.

George funds and hosts the awards, but the Alfie’s are in truth a fan award… the winners are determined by the results of the Hugo voting. But after the first few were awarded, George announced that the Alfie committee had the right to give out special awards. And as the sole member of the committee, he’d decided to give a special award this year to recognize one publication “for integrity” in declining a Hugo nomination two years in a row. Without further ado, George announced the award was to be given to Black Gate, and I was called to the stage to accept it.

It was a very real honor for me. In a very real way George exemplifies all that’s best about fandom — its inclusiveness, its quest to reward excellence, and especially its talent for building a community. I was very proud to accept the award on behalf of everyone who’s worked so hard to make Black Gate a success these last few years. 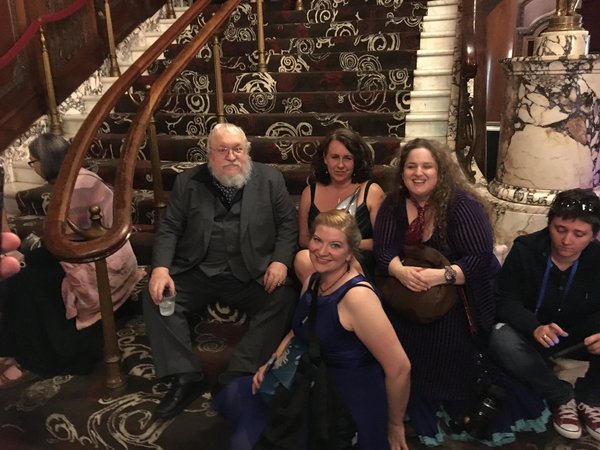 George RR Martin relaxes with fans after the awards

I have lots more to comment on — especially on the Hugo Awards themselves — but for now it’s 2:52 am, and it’s very definitely bed time. See you tomorrow.

Awesome news! Congratulations John, you and your team deserve it!

You’re a loser, John … but WHAT a loser! Congratulations! 😀

Congratualions! You and BLACK GATE will always be winners in my eyes! George R. R. Martin attracts a lot of “interesting” fans!

This is pretty awesome, John! Congratulations, my friend — and kudos to the Staff (and Sword?) I like to call the Brotherhood of the Black Gate.

This is great. Meaningless awards are the most meaningful. Congrats, man.

Congrats!!!!!!!!!!!!! You and the entire BG staff richly deserve it and it says a lot about GRRM that he would so publically recognize that. Also it is incredibly cool that a mega-bestselling author like that is even aware of BG.

This is awesome news John. So well deserved. A Hugo Loser’s party! What a great idea and I’m impressed with George RR Martin for hosting it. Both of you are class acts.
Barb

What a great honor, what an honorable bunch of people! Congratulations, Mr. O’Neill. I look forward to the day on which you are banned from the Losers Party!

Thanks to call for the comments! I am home now from Kansas City, weary but happy. The Alfie award is safely stashed in its temporary home in the living room (although my wife has made it very clear that it will NOT be going on her mantle, and I need to find some other place for it.)

I greatly appreciate all the kind words (and Jeff — I’m sorry we never connected at Worldcon! Next time.)

That Alfie certainly would have gone on my mantle, had I won it!

Congratulations, John and all at Black Gate Magazine! The recognition is well-deserved.

Congratulations, you won at losing!

Seriously, I’ve been impressed with your decision two years in a row, and I’m glad to see that good deeds do get rewarded from time to time.

Maybe someday the Hugo issues will settle down and there won’t be a need for the Alfies. Meanwhile, I’m so glad GRRM has added them to the Hugo Losers’ Party.

(And now I’m imagining the Hugo Losers’ Party as a small political party in a parliamentary democracy somewhere. Or in Portland. Perhaps they’d form a coalition government with the Homespun Yarn Party.)

That’s so awesome! Totally made my day 🙂

Big love to all at Black Gate, my fav site!

And big thank you to GRR Martin!

Thanks for the congratulations, all! It was definitely a high point of my year.

I was also pleased to see just how well we did on the nominating ballot, the details of which were released after the awards. We had the second highest number of nominations, and while the numbers were well behind Mike Glyer’s FILE 770, it’s clear it wasn’t just Puppies nominating us.