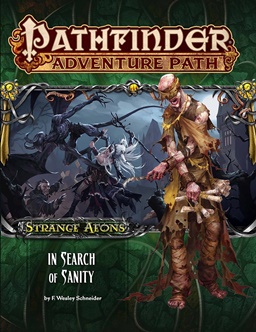 Way back in 2003, The Shackled City began appearing in the pages of Dungeon magazine. Spread over twelve installments, it let characters adventure in a connected storyline from first to twentieth level and really, it was the first incarnation of the modern Adventure Path. Paizo followed this up with two others, Age of Worms and Savage Tide. A post about the real evolution of the Adventure Path, going back to the ‘Giants’ modules from TSR, would be a pretty interesting read. But that’s not this post.

Paizo lost Dungeon when Wizards of the Coast brought it back in-house. As we all know, Paizo went from developing 3.5 materials to the massively successful Pathfinder RPG. And at the heart of Pathfinder has been the Adventure Path: a six module, linked storyline, written by multiple authors, covering levels 1 to 20. Rise of the Runelords kicked things off in 2007-2008 (I highly recommend the Anniversary Edition ) and later this month, Paizo’s nineteenth Adventure Path comes out.

That’s 114 modules of adventuring. Wow. They range all over the Pathfinder world of Golarion and really showcase what a fantastic campaign world it is. I put it up there with the Forgotten Realms as my favorite (I’m not a big Greyhawk guy, myself).

Bet you wondered if I was ever gonna pay off the post’s title, didn’t you? Well, I am. Here’s a description of Strange Aeons:

In a distant land polluted by an alien menace from beyond the stars, a great cancer grows within the earth. As its tendrils reach out through the dreams of those who learn and study its existence, a sinister cult grows more active in preparing the way for a devastation that will destroy more than the minds of would-be heroes. Can the adventures reclaim lost memories in time to stop the advance of a cataclysmic contagion that could threaten all of Golarion? Can they resist the mind-shattering truths revealed by the Yellow Sign, and the monstrous force it symbolizes? The Strange Aeons Adventure Path pits the heroes against the cosmic horrors of the Cthulhu Mythos, with new monsters, mind-shattering terrors, and explorations far beyond the known lands of Golarion.

The titles in the series:

Well now. In the first installment, the party awakens in an insane asylum (as opposed to a ‘sane’ asylum?). And they take on the Cult of Hastur in the second.  Pathfinder has covered a wide range of subjects in the preceding eighteen Adventure Paths, including technology, Gothic horror, an Asian setting, Devils and more. Starting this month, it’s about the Cthulhu mythos. I think it’s going to be pretty good.

Head on over to Paizo.com and check it out, along with the other Adventure Paths. You can download the free Player’s Guide here.

and really, it was the first incarnation of the modern Adventure Path.

Dungeon had experimented with serials earlier, the first being the five-part Mere of Dead Men series which ran 1998–1999 (issues #69–73). Leveling up was part of the series design, though IIRC it started around level five and only took PCs far enough to beat the big boss in the last installment. The editors said it was an experiment, something they had never tried before.

I wrote the introductory adventure, “Slave Vats of the Yuan-ti.” I was surprised they never bundled the five parts afterward and sold it as a complete module.

Jackson – I don’t recall reading about Mere of the Dead Men before. Thanks!

I did a read through of the first volume, and it looks like one of the best AP openers in some time. I predict it will take place as of PF’s classics, if the quality holds.