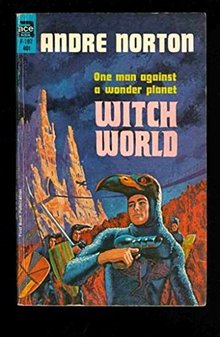 I don’t think there is any one today who doesn’t know that Andre Norton was really Alice Mary Norton, which makes her portrayal of female characters more interesting than it would be otherwise. Much of her fiction was written prior to the politicization of the feminist movement (or at least widespread public awareness of it) so it isn’t surprising that in many respects her characters reflect the traditional, male-centric, social attitudes that we would expect from that time period.

In particular we see the presentation and acceptance of women as “other” in the feminist sense, which is, stated simply, the idea that women are seen and defined not as entities and persons in their own right, but as “not men.”

The protagonist of Witch World is clearly the male human Simon Tregarth, who is transported from our plane of existence to that of the main setting of the book and its sequels and follow-ups. It’s primary world fantasy in that respect, and Simon is the “stranger in a strange land” through whom we learn about the new world. 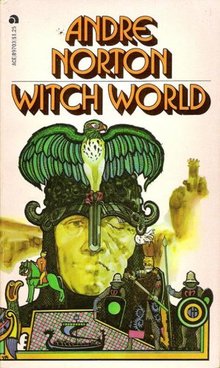 There are female characters in the book, principally the young witch Simon rescues when he reaches the new world, and Loyse of Verlaine, who is, briefly, a point of character. It’s significant that the witch – and indeed all of the witches of Estcarp – is unnamed. This is explained by the well-known trope that names have power. However, if it was that simple, everyone would guard their names more closely. Simon, for example, is expected to name himself immediately.

There are several additional tropes which solidify the presentation of women as “other,” most notably that only women can be witches (with the possible exception of Simon himself, but I’ll get to that later). The female-equals-witch idea is the essence the “woman as other” concept, so it isn’t in itself unusual, but Norton throws in some added complications, particularly that, with the loss of virginity, comes the loss of power.

We’re all familiar with the metaphoric value of the virginity-equals-power trope. In its simplest form, it’s the foundation of courtship – part of what the woman brings to the relationship/marriage, and it’s in that sense that the variation where the woman retains her power if she gives her virginity willingly makes sense. That is, that in some way the virginity has been traded for something of equal power or value.

Unfortunately it’s also the not-so-metaphoric justification for rape, as Norton makes clear several times. She shows us a captive witch who has lost her powers due to rape, and the main-character witch is in danger of the same treatment at one point.

The complications surrounding the virginity issue don’t stop at rape, though that consequence is the most severe to the individual. Several times Norton make the point that the loss of virginity makes a witch “truly a woman” and that they “lose all womanly purpose” by not giving up their power/virginity. The fact that so many women are out of the breeding pool is leading to declining population numbers to the extent that their race is in danger of dying out completely. That appears to be the price of the witches’ power. 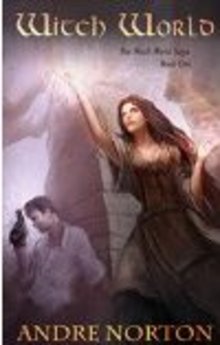 Non-witches don’t have it much easier. Loyse inherits Verlaine from her mother, but it’s her father – someone who “married in” – who holds all the political power. She’s effectively powerless, and if her father has a son, even out of wedlock, he can claim her property. Obviously there’s a certain amount of “plot device at work” here, but it’s significant that Loyse herself finds all of this normal. In order to regain control over her own person when her father arranges a political marriage for her, Loyse escapes by dressing as a man.

It’s significant that other than Loyse, the only women we see are witches, or mistresses. There are no ordinary women. No seamstresses, no cooks, no servants. We do see ordinary men.

It’s even more significant that we don’t see the point of view of the witch. We’re shown how Simon’s feelings of connection with her grow over the course of the narrative, but we’re never shown her feelings, and because of this, we don’t know what motivates her actions at the end of the story, when she gives up her powers to become Simon’s wife.

This is what I would call a “happy ending” in the traditional sense, and I have to say that I remember a feeling of satisfaction when I first read this book as a young girl. Of course, then, I identified with Simon, and in nice Hollywood endings, the hero gets the girl as a reward for all his hard work and the horrors he’s had to face. It’s as an adult that I wonder, what’s in this for her?

I would like to say something in defense of my younger self. I think there is a reason that I identified so closely with Simon, and with others among Norton’s characters for that matter. The majority of Norton’s characters are male, for practical reasons I won’t go into right now, but it occurs to me that many if not all of her male protagonists are “feminized.”

They are, in fact, the “other” in a way that is usually reserved exclusively for the portrayal of women. They begin their narratives as apart from, lesser than, the “normal” male characters of their settings. They are sometimes literally non-human, and second-class citizens (Star Guard for example) and even when they are human, they have a special talent which, rather than making them more valuable (like a superhero) underscores their outcast status. They are, in effect, treated like witches.

Final aside: I’ve placed three covers for Witch World in their order of publication. The evolution of the art is interesting, to say the least. From the more recent cover, you might think the protagonist was female.

Violette Malan is the author of the Dhulyn and Parno series of sword and sorcery adventures (now available in omnibus editions), as well as the Mirror Lands series of primary world fantasies. As VM Escalada, she writes the upcoming Halls of Law series. Find her on Facebook and follow her on Twitter @VioletteMalan..