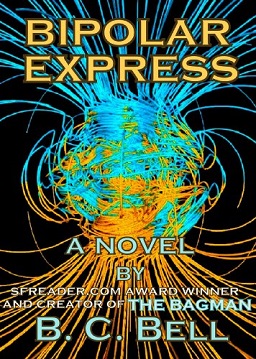 I’m a big fan of B. Chris Bell’s film-noirish, pulp fiction stories, and his wonderful novel, Tales of the Bagman Volume 1, The Bagman Vs The World’s Fair, and Tales of the Bagman, Volume 3, all published by Airship27 Productions (and previously reviewed by me here at Black Gate.) So I jumped at the first chance I had to read his excellent, and very hard to pigeon-hole, Bipolar Express. Now, when I say it’s hard to pigeon-hole, I mean it. You can’t slap a label on this one, folks. But I will say this — it’s an important novel: serious, with that element of scary realism, gallows humor and touch of madness that will keep you laughing while the story shakes you up.

This is a novel of truths and wisdom that casts an observant eye on a certain segment of society many of us don’t like to think about: alcoholics, drug addicts, rehab centers and asylums. Bipolar Express has much in common with The Man with the Golden Arm, The Lost Weekend, and Trainspotting, with a macabre touch of Philip K. Dick to add a whole other level to the novel. It’s a “scare you straight,” post-apocalyptic story with a science fiction element that I won’t spoil for you: is what’s happening to the characters reality? Or is it all a shared hallucination? This would make one hell of a freaking movie! It’s also quite a wild ride. I’m not even sure how to tell you about it. So first I’m going to tell what Chris says about it, and then I’m just going wing it from there.

A misdiagnosed mentally ill man spends thirty days in a mental institution. Four years later he finds himself rescued from his own destructive impulses by his fellow patients, who inform him that the magnetic poles have begun to shift, just as they have every 250,000 years. Regardless of the truth, now he’s trying to survive the worst winter in Chicago history along with his mentally ill friends, a man with no fingers, and a cannibal dog. And, if the cold, starvation and illness don’t kill him, there’s a gang roving the city that will. Along the way he’ll discover magnetism affects the behavior of birds, elephants, ants, even humans. And then there are those ‘radioactive’ rays in the sky… this is a novel about failure, redemption, and the end of a world.

Okay, now it’s my turn. And whether or not you think I’m writing in any sort of logical order is your problem.

First, as has been mentioned, this novel is set mostly in Chicago, although the first part takes place at Clear Rock Rehab, which seems to be somewhere near Rockford. Bell gives us an incredibly vivid account of being inside what used to be called Bedlam. At first, Bipolar Express comes off as darkly funny. But then it becomes even darker, funnier, and deadly serious to the max. The main character is Holt, an alcoholic who has hit bottom. In Holt, Bell has created a very interesting, unique, weak/strong, sad character that will make you weep. Holt’s roommate is Wesley, a big, strange dude who refuses to flush the toilet or use toilet paper out of fear that he might stop up the toilet again. This is quite hilarious, but it’s also quite sad; if you’ve ever been in rehab centers, sanitariums, or nursing homes, you’ll know just how sad something like that can be. 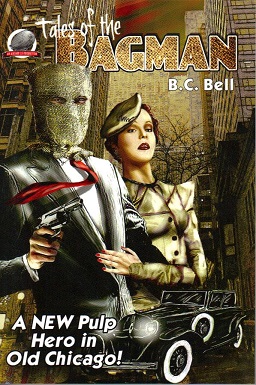 Then there’s Jack, tough as nails, and who at first seems to be the leader of this merry little band of pranksters. The story soon changes from the rehab center to the trio’s adventures when they make their getaway and find themselves on the all-but deserted streets of Chicago during a major catastrophe brought about by a sudden, worldwide shift in climate. The final act takes place in a CostCo-like store where Holt, Jack and Wesley take refuge, along with a homeless derelict named Frostbite, whom they befriend. Oh, there’s also that mangy dog, which Holt takes in and starts calling Thing — a pet that may or may not be a cannibal canine. (There’s also a funny bit about cans of “Heinz Spotted Dick Sponge Pudding,” a thing I did not existed until I read this and did a little research. But I digress.)

So… while Jack and Wes pursue the object of their addictions and enjoy the luxuries they find in this huge store, Holt has stopped drinking and seems to be holding it together. Gradually he comes into his own and becomes the strong one, slowly assuming leadership. But as he starts pulling himself together you sense the tension in him, the emotional and mental fuse that could ignite at any time. Along the way the three amigos’ encounter with another gang becomes a showdown for survival, and when the violence hits it strikes the way it often does in real life: out of nowhere and slamming you in the face. The climax of the novel arrives when Holt is faced with a choice I hope never to be faced with. And the choice he makes is born of madness but is also very rational in light of the situation. This novel takes you from the nightmare of one kind of bedlam, to the nightmare of a frozen world, and into the nightmare of another kind of bedlam.

Did all this really happen? Or did it happen only in Holt’s mind?

Chris Bell writes with great humor and sensitivity, insight and self-reflection. He has a way with words and a way with turning a phrase. I don’t know how he comes up with things like, “House of Whacks” (referring to Clear Rock), or “Descartes was bored when he came up with ‘I think, therefore I am.’” Bell also asks the question: “Is it mentally ill to be depressed if you really have a reason to be depressed?? (My answer: no.)  Or how about this one: “The clinically depressed aren’t real big on faith.” (In my case: true.)

Bipolar Express is one hell of an excellent novel, and Bell is one hell of a writer: he’s the real deal. I’ve also read his stories in Secret Agent-X, Mystery Men and Women, The Green Ghost, and Dan Fowler: G-Man, to name a few… all published by Airship27. His short story, as I’ve mentioned before, his wonderful short story, “How Pappy Got Five Acres Back and Calvin Stayed on the Farm,” is a SFReader.com Award Winner. I would like to see Bell turn his hand to heroic fantasy or sword and sorcery. He could do it, too. He’s a master of serious, genuine pulp fiction. A true pulpeteer.

Oh, and did I mention nail clippers? Nail clippers are very important to Holt.

Damn you, Joe Bonadonna, you did it again: you made me want to get this book and find time to read it asap – and not simply because it has some things in common with Truck Stop Earth, such as the bi-polar aspect, but because you know what matters to me and you always tell me if the book will deliver what I want as a reader. Thanks, I guess, but I know I’m going to stay up all night reading it — so you owe me a night’s sleep. Chalk up another win for books that defy marketing categories and reviewers literate enough to review them in the context of modern literature.

Thank you, Sacred Bander. I’m happy you liked the review and purchased the Kindle — hope you enjoy it. It’s very different from Bell’s New Pulp stories, although it retains the adventure and spirit of pulp. I’m sorry you lost a night’s sleep. I’ll send you a bottle of Sominex.

Long life to you, and everlasting glory!