We have this long history of actors trying to make a name for themselves through other creative endeavors, and it seems to be getting popular. Actors jumping into the music industry, like Kiefer Sutherland, David Duchovney and Malin Akerman. Actors exploring the world of visual art (Anthony Hopkins is an avid painter, I learned recently). And there are a lot of actors who try their hand at writing. And I don’t mean cookbooks (no disrespect to Gwyneth Paltrow) but writing fiction, which takes a little more talent and skill.

As my inaugural post here at Black Gate I want to talk about Gillian Anderson, specifically her debut novel A Vision of Fire, which she co-wrote with NYT-bestselling author Jeff Rovin. As the blurbs on the back of the book jacket say (click the image above right to sample them), the idea of Agent Dana Scully writing speculative fiction is enough to get our attention, even if expectations aren’t particularly high. But luckily for us, it turns out Anderson knows what she’s doing.

The story centers on Dr. Caitlin O’Hara, a renowned child psychologist who is asked to treat the daughter of the Indian ambassador to the UN, at a time when India and Pakistan are on the verge of nuclear war. Though there are very vague hints at the supernatural early in the novel, at first the situation is simply a psychological mystery. But then things get more bizarre, as teens and young adults around the world experience breakdowns similar to the ambassador’s daughter. Though initially a skeptic, as Caitlin begins to see more and more evidence of something fantastic at work, she’s forced to accept that there is more out there than what psychology or science can explain. 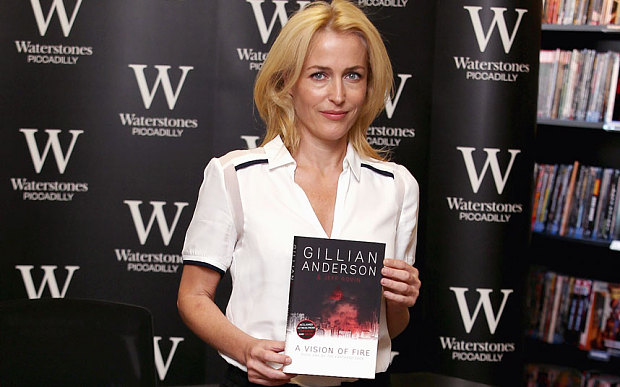 Sound familiar? Caitlin is obviously similar to Agent Scully, but in the literary world that’s called writing what you know, so we can let that slide. That said, while Vision is a compelling read, it isn’t perfect. As Caitlin learns more about what’s happening to her patients, she comes to her conclusions a bit quickly, when it’s needed to advance the plot rather than when it really makes sense for the character.

The twists and revelations are really nothing new in the world of speculative fiction, though Anderson and Rovin try to be original. And the ending is clearly meant to lead directly into the sequel, A Dream of Ice, which was released last December. My gut tells me that Simon and Schuster banked on Anderson’s star power being strong enough to entice readers to try at least the first two books of what’s now being called The EarthEnd Saga.

However — and contrary to the reviews I’ve seen elsewhere — I would still recommend A Vision of Fire. It’s solid fantasy that echoes the soft science fiction that launched Anderson’s career, with compelling central characters and an overall premise that does try to be original with the elements it combines. I plan on reading the next one — and not just because I’m an X-Files fan.

I always wonder how much the “non-author” actually writes/contributes when they co-author a book with a professional writer.

As opposed to those books where an author has turned over a series to another writer, like Clive Cussler has done.

I often ask myself that, too, Bob. Since the focus in terms of publicity has been mainly on Anderson (I’ve seen media of her doing book tours and signings, but not Rovin), my thinking is that the idea was hers, and that Rovin helped her refine the manuscript for publication. But that’s only a guess.