In Brooklyn during World War II, a pair of black widows were luring men to their deaths. They preyed upon older, lonely men without family or close friends. With a “Room for rent” sign hanging in the front window of their idyllic-looking home, they fed arsenic-laced wine to their victims. A male relative who lived with them buried the bodies in the basement, with no one the wiser. The women were in fact little old ladies: think Aunt Bee as a serial killer.

But a nephew came over and found a body in window seat – the thirteenth victim. He slowly realized that his two loveable old aunts were killers. Then, his brother, a murderer on the lam from the police, showed up with his lackey in tow. It’s a hardboiled, true crime story that curiously, is largely forgotten today.

Just kidding! It’s actually Arsenic and Old Lace, a smash stage play that became a popular movie starring Cary Grant, Raymond Massey and Peter Lorre. The play ran on Broadway for 1,444 performances and is still in wide use today.

Jack Benny and Ronald Reagan reportedly turned down the lead, while Bob Hope wanted the part but Paramount refused to lend him, so he missed out on a hit. Cary Grant was under contract to Columbia and Warner Brothers had to arrange for the use of him. To take advantage of Grant’s schedule, it was filmed in 1941 but not released until the play’s run had ended in 1944. 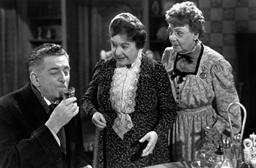 The screenplay was written by Philip and Julius Epstein, the dialogue wizards responsible for the witty parts of Casablanca. I don’t know which lines come from the original play and which the Epsteins added, but there’s plenty of funny stuff, such as “Insanity runs in my family. It practically gallops.”

The three Brewsters starring on Broadway (Josephine Hull, Jean Adair and John Alexander) were all given eight weeks off from the play to appear in Frank Capra’s film. However, Boris Karloff, the main attraction of the play as evil brother Jonathon Brewster, was not. The producers feared attendance would drop without their star, so they refused to let him make the movie.

Raymond Massey, whose first credited screen appearance was as Sherlock Holmes in The Speckled Band (further proving the fundamental interconnectedness of everything…), took the role. The multiple references to Jonathon looking like Karloff in the film are a running gag and even funnier when Karloff himself reacts to them in later television versions.

It’s Elementary – Of course, you already knew about Massey’s turn as Holmes, having read this Black Gate post… 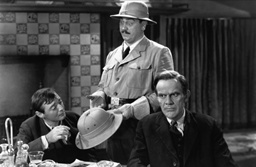 Peter Lorre is Dr. Einstein, the drunken plastic surgeon who has operated on Massey’s face several times to help him avoid detection by the police. During the most recent update, he had been liquored up and recently seen a Karloff movie, so that affected the job he did on Massey. Lorre is almost likable, which isn’t easy to pull off in that part!

It’s unclear whether Alexander’s ‘Teddy Roosevelt’ Brewster is Mortimer’s cousin or brother, but it doesn’t really matter. He thinks he’s actually the famous president and whenever he goes up the stairs he blows a bugle, yells “Charge” and sprints up as if it were San Juan Hill. After the two old ladies have killed someone, they tell Teddy that the man died of Yellow Fever and instruct him to bury the body in the basement (the Panama Canal). Alexander is pretty entertaining in the part.

Priscilla Lane, who co-starred in the Cagney/Bogart classic, The Roaring Twenties, plays Grant’s love-interest, but it’s not a very significant part.

Grant’s character finds himself trying to get rid of his evil brother while keeping his two aunts from being arrested for murder. He hits upon having Teddy committed to a mental hospital, blaming the murders on him. And he has to deal with the fact he’s supposed to be heading off on his honeymoon at the same time.

Grant did not like his performance. Capra insisted he perform the role ‘over the top,’ and Grant did so. It’s obvious and full of double takes, but it works. He’s quite funny and it doesn’t matter that he plays the role in such a heavy-handed manner. 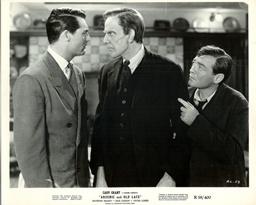 There’s lots of humor throughout. The movie starts with a scene at a Brooklyn Dodgers game and the outrageous behavior of fans of ‘Dem Bums’ is on display. One of the tombstones in the cemetery next to the Brewsters’ house says ‘Archie Leach.’ That’s Grant’s real name. Once Grant discovers the body, he spends the rest of the movie juggling developments. Jack Carson, who plays a young policeman taking over the Brewsters’ beat, is quite befuddled by Teddy’s antics.

While I’m sure intentions were good, the 1969 television attempt (which you can see here) is rather disappointing. It was updated from the forties to the sixties, which makes the Roosevelt tie-in irrelevant, and the laugh track doesn’t help things at all. The cast isn’t bad, with Bob Crane (Hogan’s Heroes) replacing Grant and Fred Gwynne (good old Herman Munster) as bad brother Jonathon.

The Brewster sisters were well cast with silent film star Lillian Gish and stage legend Helen Hayes in the roles. It’s not a terrible thing to watch, but it certainly pales in comparison to the original.

Arsenic and Lace is my favorite comedy movie and I highly recommend seeing it. Just make sure you stay away from elderberry wine…