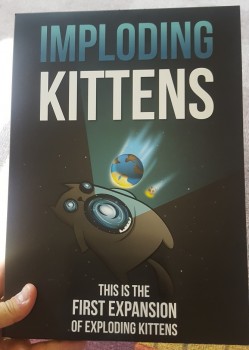 The Best Four Days of Gaming have passed. I began my 2016 GenCon coverage with an earlier discussion of a handful of new and upcoming games. There will be more of those to come, as there was no shortage of new games worthy of attention, but a lot of great games at GenCon this year weren’t entirely new, they were either expansions to existing games, or sequels or variants.

Not all of these games are quite available to the public yet. For example, the wildly popular card game Exploding Kittens (Amazon) had copies of its first expansion, Imploding Kittens, available. The expansion featured only 20 new cards to the game, including several new game mechanics and allowing for a 5-player game. The size of the expansion package is because it also included a human-sized “cone of shame,” to be used on the first person who forgets that the “Reverse” card has been played. It is unclear whether this highly-amusing feature will be part of the public release of the expansion.

And yes, some potty-humor aside, this expansion falls in the “Safe for Work” category. (The core game of Exploding Kittens has a NSFW edition.)

So I’ll cover a mix of games and, when possible, link you to information on how to acquire those that are available.

Back in 2014, I first covered the Upper Deck Entertainment’s Legendary line of games with their flagship game, Marvel: Legendary. This is a deck-building game where you accumulate heroes from the Marvel universe to defeat one of various schemes (represented by a Scheme card) perpetuated by a villainous Mastermind. As with other games using the deck-building mechanics, the goal throughout play is to acquire useful cards, leveraging synergy between them, and gradually weed your deck of less useful cards. Legendary certainly was not the first deck-building game, but the use of the Marvel property has made it one of my personal favorites. The core game appears to be unavailable on the Upper Deck website store, but you can still track copies down on Amazon.

The design also allows it to have a nearly-unlimited possibility of expansion. These have come in the form of small expansions which added about 5 heroes, a few schemes, and a couple of Masterminds, such as The Fantastic Four, a Spiderman-themed expansion, and Guardians of the Galaxy.  Bigger expansions, such as Dark City (Amazon) and The Secret Wars (volumes 1 & 2) have included more significant sets of Heroes, Masterminds, Schemes, and various villain cards, as well as other mechanics possibilities, such as a deck of “Sidekicks” available for purchase and an “Ambition” mechanic. A full variant of the game, Marvel Legendary Villains (Amazon) flips the tables and allows you to play the game as the villains attempting to destroy the heroes.

As if that isn’t enough, the basic Legendary system has been extended into a slightly less-extensive Legendary Encounters line of games, which had releases built around the Aliens (Amazon) and Predator (Amazon) properties.

Which brings us to GenCon 2016, where Upper Deck’s booth featured three significant new releases. The first is a new big box expansion for Marvel: Legendary, Civil War. This expansion, built around the Mutant Registration Act storyline from the comic series, allows for teams to pit players of heroes against other heroes, and also features a new “Divided” card mechanic, where some cards feature two different characters and powers, and the player has to pick which one activates when it is played.

They also announced two games in the Legendary Encounters line, which … well, I think these just need to speak for themselves: 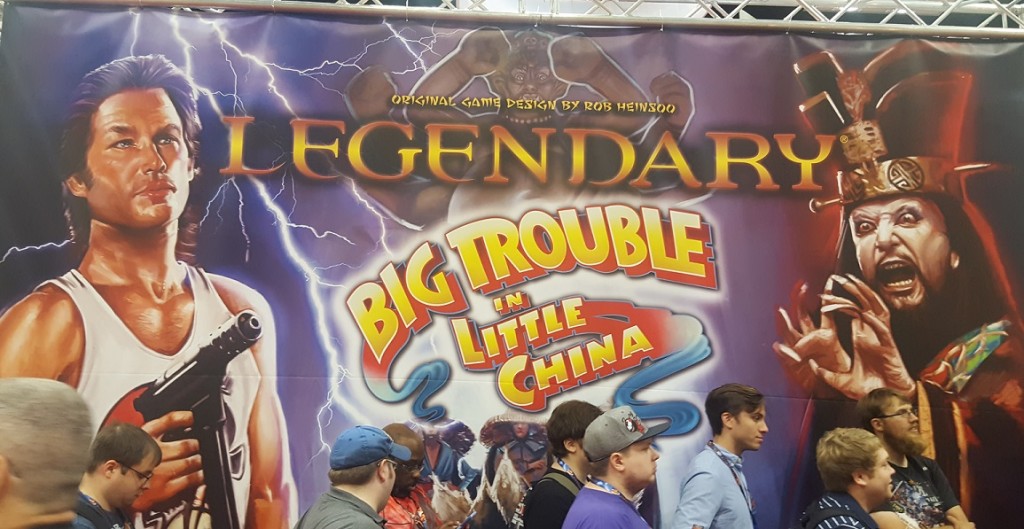 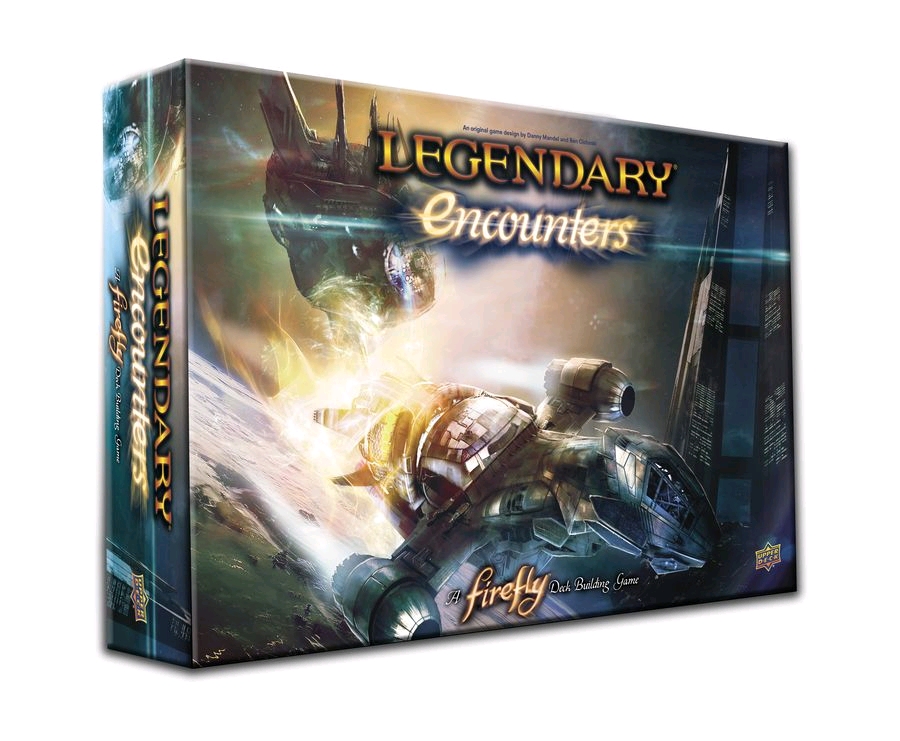 The Big Trouble in Little China game doesn’t appear to be available beyond GenCon yet, but there are copies of the Firefly deck-building game on Amazon. By way of fair warning, the artwork for the Firefly game are artistic renditions rather than pictures from the series. By and large it’s quite good artwork, but there are a few of the character cards that I think failed to capture the characters as well as I would have liked. You can get a sample of the visuals at the Upper Deck blog, but the gameplay looks to be a lot of fun. One of the intriguing mechanics is that the Firefly game features “Side Jobs” that enter the game like enemies do, and there are negative consequences if players fail to complete the side job in time.

I’ll definitely be looking to do a full review of this game when I get a chance, possibly as a return to my “Firefly Friday” series of blog posts. 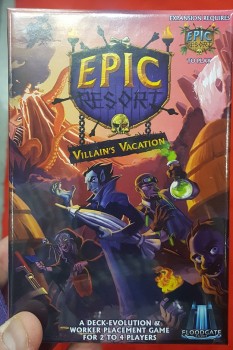 For a while, I have noticed a certain set of games that have a theme that can best be described as follows: playing out the downtime of fantasy RPG adventurers. The first of these that I became aware of was Slugfest Games’ Red Dragon Inn (Amazon), where you play a group of adventurers in a tavern, gambling and getting drunk after an adventure is over. This game has gone on to 4 full sequels, each featuring different characters, and a number of expansions in its own right. Another game along these lines that I noticed was Tasty Minstrel Games’ Belfort (Amazon), a worker-placement game about elves, dwarves, and gnomes building up their town. And iEllo’s Medieval Academy (Amazon) centers on an adventurer-in-training trying to make his or her way through their grueling curriculum.

One of the more intriguing entries into this particular sub-genre is Epic Resort (Floodgate, Amazon), which I supported through Kickstarter a couple of years ago. The game is set in a fantasy world resort where heroes come to relax and recuperate between their adventures. This is a worker management and deck-building game where you build and upgrade attractions at the resort, gathering gold and attracting guests and heroes, and dealing with the occasional monster attack. You gain victory points based on how many attractions you have been able to acquire and how many heroes have fully rejuvenated. If I had a complaint about Epic Resort, it ran a bit long and there reached a point where I’d find myself largely trying to wait out the last of the monsters to finish attacking so we could resolve who has the most victory points. This has been resolved in a 2nd edition release, from what I can tell, which has a handful of modifications, such as a reduced-in-size monster deck.

This upgrade also came in time for the release at GenCon of the expansion Epic Resort: Villain’s Vacation, bringing villainous guests to the resort. The expansion introduces three new attractions, a variety of Villains and guests, as well as some new monsters, including the Kraken, who eats guests for several rounds before attacking the resort. The game can be pre-ordered at present through the Floodgate Games website.

Floodgate has another game, Vault Wars (Amazon), that is set in the same universe and might be of interest to those who have made it this far. In this game (released last year), you are bidding in an auction for treasure vaults of adventurers who never returned from their latest quest. 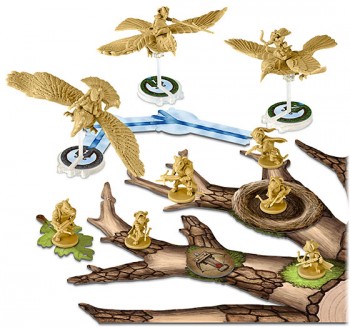 Last year, I was able to get a picture of the upcoming game Tail Feathers (Amazon) from Plaid Hat Games. That game is a full stand-alone sequel to Mice & Mystics (Amazon), which I have reviewed in the past (or you might have seen Wil Wheaton play it with his family on the two-part Season 3 finale of Tabletop).

Mice & Mystics itself already has two expansions, Heart of Glorm (out of print, though they had new copies at GenCon) and Downwood Tales (Amazon), but Tail Feathers moves in a whole new direction, going from a cooperative story-based RPG-in-a-box to a competitive wargame-in-a-box format.

In this game, the players take on the role of the mice and rats fighting against each other, including by flying from tree to tree mounted on the backs of birds. My whole family, already big fans of Mice & Mystics, tried this one out and fell in love with it. The mechanics are familiar to those who have played the previous game, but have enough variation that it really becomes an entirely different experience. A variety of scenarios and missions are available to prevent the game from becoming stale across multiple sessions. One particularly nice feature is that the game includes cards for the characters (and monsters) from the original Mice & Mystics game, so you can use those models to add your favorite characters as units within Tail Feathers, so it really gains tremendous value in combination with the earlier game.

Plus, let’s be honest … is there anyone who doesn’t want to be a mouse flying around on a sparrow’s back? Getting games like this is, in retrospect, basically the main reason to have kids.

Plaid Hat Games also had their new zombie game, Dead of Winter: The Long Night (Amazon) available at GenCon. It is a standalone expansion to Dead of Winter (Amazon), which allows it to be played with the earlier game or just as a game of its own. (The original Dead of Winter was also played on Tabletop, if you’re interested in watching.) The game features a whole new slate of survivors to build your colony with, and also a Raxxon Pharmaceuticals location, complete with twisted human experiments to plague the colony of survivors. As if zombies weren’t enough!

They also had an early demo of an upcoming expansion that will allow players with both games to compete against each other, pitting colony against colony for resources. Given the success of Dead of Winter, I’m expecting this line of games to be continue its popularity.

That’s enough for this update … but I’ve saved the best for last, as my next installment will feature my discussion with the folks at Paizo Publishing about the upcoming plans for their Pathfinder line and, more specifically, the new science fantasy adventure, Starfinder RPG. Keep your eyes open for that one.