The Best Four Days in Gaming has come to Indianapolis, and again I’ve made my way into the dragon’s den to seek out new and interesting games. The scope of GenCon has definitely expanded over the decade or so that I have been attending and covering it, largely swallowing up downtown Indianapolis. This year, the Lucas Oil Stadium used by the Indianapolis Pacers has become the newest participant, becoming home to the popular “True Dungeon” live dungeon crawl adventure (which, one of these years, I will actually participate in). Even the types of games have expanded. Though in the past, Pokemon has had an incredibly sparse presence at GenCon, two giant inflatable Pikachu’s dangling from the ceiling have indicated a change in that trend.

In addition to the convention expanding in size, the number of games has become truly dizzying. The game company iEllo, best known for their breakaway hit, the monster-ravages-city game King of Tokyo (and its sequel King of New York), hosted a party on Thursday evening that I was fortunate enough to be invited to, and I ended up sitting next to Eric Summerer of The Dice Tower podcast. He discussed just the sheer difficulty generated by the volume of games being produced, and how it affects not just individual game consumers, but also those of us who spend some portion of our time trying to make sense of which games to discuss. What is the best way to present information about quality games, when the general quality across the industry has become so high and there are so many publishers seeking to get the word out on their new products?

One overwhelming trend in the gaming industry is expansions and sequel games, and that’s going to be the focus of my “part 2” review. For now, I’m going to focus on brand new games, as I think they deserve a bit more attention. And by “new games” I mean brand new games. There are some fantastic new games in the Legendary series from Upper Deck, for example, but since they largely apply an existing game mechanic, I’m counting them among the sequels. Definitely watch for that.

Now, on to some of the new and upcoming games …

One game that I was thrilled to learn about was the upcoming Star Trek RPG, which is slated for a 2017 release from British gaming publisher Modiphius Entertainment. I was familiar with Modiphius in name only, as the producers of the Achtung! Cthulu (Modiphius, DriveThruRPG, Amazon) and Mutant Chronicles RPG (Modiphius, DriveThruRPG, Amazon) lines of games (neither of which I have ever played).

In talking with Modiphius founder Chris Birch, I learned a lot of great things that made me even more excited for the upcoming game: 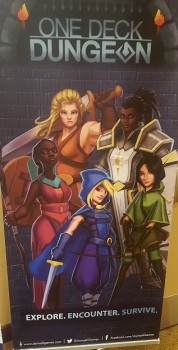 A great new game that I stumbled upon was One Deck Dungeon, a recent Kickstarter that is being published now by Asmadi Games and slated for release in the next couple of months. As the name suggests, this is a fairly quick, straightforward dungeon crawl adventure game, designed for one or two players (although you can buy two decks for a 4-player game). This is a collaborative game, where adventurers join forces to move through three levels of a dungeon, then compete in a boss fight against the dungeon’s major threat.

Players move through a deck of monsters or perils (mostly traps), which are represented as “closed doors” on the back of the cards. There are two main penalties in the game: losing time and taking health damage. Losing time is represented by moving cards into the discard pile, thus getting you closer to the stairs at the end of the deck … which moves you down a level in the dungeon, possibly before you’ve leveled up enough to handle the increase in difficulty. You can explore, bringing up to four of these “doors” into the play area, and then Encounter what is behind the door by flipping the card (“opening the door”). Then you face either the monster or the peril, and have to utilize your stats (Fighting, Agility, & Mana) and skills to roll a series of 6-sided die in order to meet the challenges specific to that monster or peril.

If you fully defeat the monster or peril, you take no damage. If you do not fill all the squares on the encounter card, you still defeat it, but you get penalties to time or health. You then have to pick one of three possible “loot” rewards: gain XP toward leveling up, gain an item that boosts your stats, or gain a new skill. When you get through the deck and reach the stairs, you progress to the next floor of the dungeon and each challenge becomes more difficult, which is why it’s so important to gain as many levels, skills, and items as possible before proceeding. We died in my demo, before even reaching the second floor. It was explained that this is a game that is designed with a fairly high challenge ratio, rather than one that you should expect to win most times around.

The game I played was a demo printed sample, of fairly high quality but probably not the final production quality of the game. It was printed on decent, glossy card stock, but it didn’t even have a box. Despite this, it was obvious that the artwork was of high quality, and that the game mechanics were well planned out. The game kind of reminded me of a mix between Munchkin (Amazon) and Tasty Minstrel Games’ Dungeon Roll (Amazon), if that provides any perspective.

You can find out more about the game, including accessing Print-and-Play demo materials, at the Kickstarter page. Pre-orders of One Deck Dungeon can be made now through the Asmadi Games website. This also strikes me as a game that will be successful in standalone form, but is also ripe for a forthcoming expansion, so I would expect to see that in the next year or so.

There were a couple of fun new games at Renegade Game Studios. I hope to be able to demo copies of their Goblin-based deck-building game Clank! when I return on Saturday, but let me now focus on the one I did demo: Dicey Goblins.

This is a 3-6 player game where players are greedy goblins who are sneaking into a dragon’s lair to steal dragon eggs, with the hope of getting out with their hides intact to sell. Each turn involves rolling 2 dice, and once three “goblin heads” are cumulatively rolled, the goblins remaining in the dungeon are killed and don’t get any dragon eggs. Part of the strategy in this game is that each player must decide individually if they are going to sneak through the dragon’s lair or grab an egg and run. If multiple goblins grab eggs and run at the same time, they get in each other’s way and get fewer eggs as rewards. But if you sneak for too long, then you run the risk of getting killed by the dragon and getting no reward. This is a game that really, I suspect, hits its stride with the full 6 players, as on each round the cost vs. benefit of sneaking for too long will make people sweat out their decisions.

The basic theme may sound vaguely similar to the dice game Fandooble from Mindtwister, a favorite with our youngest and fun for the whole family. In that game, you roll die to determine how much treasure you get from a dragon’s hoard before being killed by the dragon, and if you roll the thief (Fandooble), you can also steal from the stashes of gold stolen by other players. Dicey Goblins has a similar feel, less of direct probability estimation, and is likely better for a larger group. And it has goblins, which are completely lacking from Fandooble. 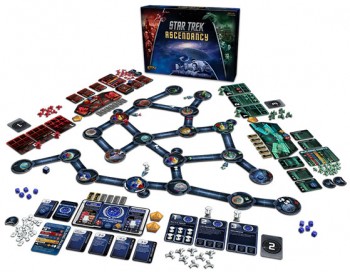 While I usually try to highlight some of the lesser-known games in this space, there was no missing Star Trek: Ascendancy (GF9, Amazon) at this year’s GenCon. Produced by Gale Force Nine, which has come out with phenomenal products like Firefly: The Game in recent years, going from merely an accessories company into a powerhouse in the development of really compelling original games (often gaining an extra boost since the games leverage very well-established franchises).

Star Trek: Ascendancy is built around the various empires of the Star Trek universe. The base game comes with the Federation, Klingons, and Romulans, and a Cardassian Union expansion was also available at GenCon. The “board” represents a series of planets that expands as you explore more territory, gaining new worlds to your coalition through either diplomacy or force, managing various resources, and then figuring out how to deal with the inevitable conflicts that will arise between the empires.

The game says on the box that it is for 3 players, and that it takes about 1 hour per player. Expect longer than that the first few times you play, as you build up experience in the game dynamics, since there are so many options. I did ask one of the people running demos if it would be possible to play with only two people and she indicated that she thought it could scale down to that, although it doesn’t appear that there’s a solo play option.

You can also download the rulebook for Star Trek: Ascendancy from the website, to look into the game in more detail.

And that’s it for now … be on the lookout for more coverage on more new games in the days to come.

Modiphius looks to be on the verge of replacing Mongoose as the standard for Conan RPGing with their recently kickstarter campaign for ‘In an Age Undreamed of.’

Impressive to see them taking on Star Trek on such as scope as well.

Thanks for the report. I envy you!
My newest game is in Gen Con though: Let them eat cake from osprey. I hope you forgive me this shameless plug 🙂