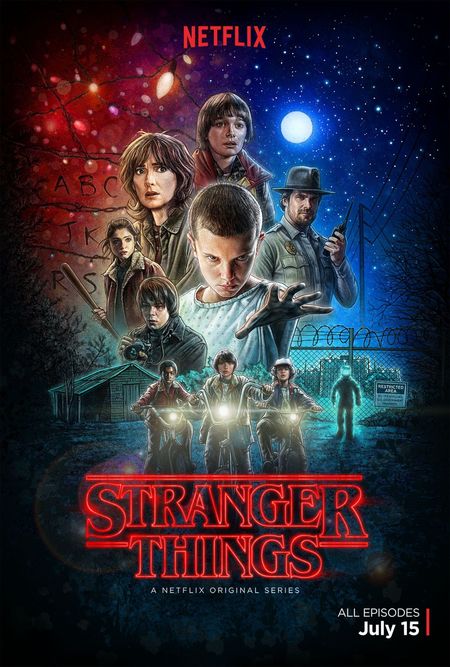 Having begun my career as a lifelong geek quite early, I have learned that if anyone but my closest friends tell me I’m going to love this (book, movie, game, music), I’m probably not going to.

Granted, my adult tastes have widened a bit, but to this day if you ask me to choose between watching a current episode of Grey’s Anatomy or How I Met Your Mother versus MST3K or Twilight Zone, the question is barely valid. This is why the morning coffee-machine-conversations at my “day job” never involve topics to which I pay much attention.

That is until last week, when I overheard a raving endorsement for the Netflix series Stranger Things.

As stated, I would normally have ignored what I heard were it not for the phrase, “…think of it as Goonies, meets Stand by Me, meet It.”

Okay, the speaker knows these three movies well enough to wrap them into a comparison? About one Netflix series?

First I checked my standard sources, where I learned the series is eight episodes and launched in mid-July. None of the core characters is over the age of 14, but one of the main adult characters is played by Winona Ryder (who gets top billing). The creators are Matt and Ross Duffer (a.k.a.”The Duffer Brothers”) who appear to have always been a writing team for the entire course of their nine year careers, and whose only other major writing accomplishment is the M. Night Shyamalan-directed Fox series Wayward Pines.

Unable to draw any conclusions from this — other than a raised eyebrow over a series giving Winona Ryder top billing — I decided to devote a few hours to the first three episodes. I mean, if we’ve learned anything from the many episodic storylines available for our binge-watching pleasure, it’s that you have to stick with any new offering at least until episode three. 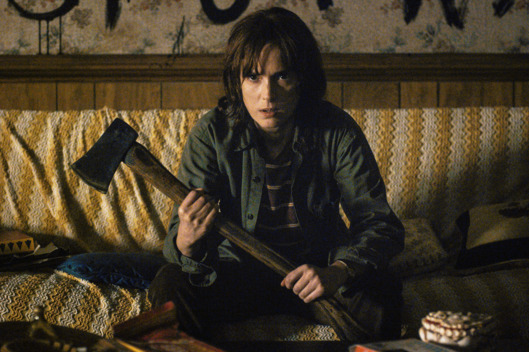 For fear of giving away even the smallest spoiler (and there are so many twists it would be easy to do), I’ll stick with a few general facts and the synopsis provided by the network:

In a small town where everyone knows everyone, a peculiar incident starts a chain of events that leads to the disappearance of a child – which begins to tear at the fabric of an otherwise peaceful community. Dark government agencies and seemingly malevolent supernatural forces converge on the town, while a few locals begin to understand that there’s more going on than meets the eye.

Though Stranger Things is far more than a sum of its references, for me the references are a huge part of the fun. For instance, one of the first scenes in episode one is the nerdiest imaginable: four boys, ages 11 or 12, sitting around a table playing Dungeons & Dragons. In fact so far as I’ve watched, D&D has popped up quite a lot as a way for the main characters to understand and navigate the events happening to them.

Then there’s the 80’s soundtrack which is not only perfectly paired with the action, but ignites mini-detonations of nostalgia with every song. And the whole look and feel of the series calls to mind 80’s movies like, well, Stand by Me, Goonies and It. 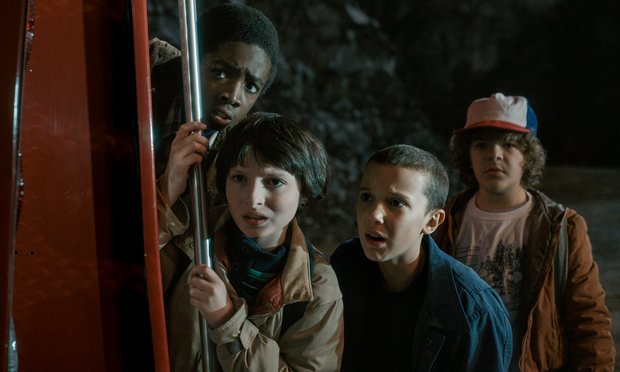 Some of the credit for the show’s success is being given to casting director Carmen Cuba, who managed to not just find great actors, but great child actors (as opposed to adults trying to look like children). The kids are incredible, especially Millie Bobby Brown who was herself 11 years old when she shaved her head to play the character “Eleven.” She has the least amount of dialog but the incredible emotional ability to suck you right in. And to be fair, Winona Ryder is darn good as well, playing the harried, dysfunctional single-mother of one of the kids.

Is Stranger Things sci-fi or horror? It’s both, in the way that The X-Files were both, and it was embraced so quickly by Netflix’s customers that a season two is already confirmed.

But I have resisted reading any more about it beyond this, as it appears I am the only person who has not binged all eight, season-one episodes in one sitting.  I am parsing out the remaining five since it will be a full year before there are more.

This also means I must now avoid the kitchenette at my day job and wear headphones at the gym for a whole different reason.  Everyone is talking about this new series, and for once I understand why.

Have you checked out Stranger Things?  Don’t leave any spoilers but do leave your opinion of the show in a comment below or via sue@blackgate.com.

Okay, you got me. I’ve been hearing vague happy references to this series among the geeks I follow on Twitter, but Twitter being Twitter, no details on why were forthcoming. Now I know what the spouse and I will be watching on our next in-house date night, 80’s D&D kids that we were.

Sarah,
Have paper and pen on hand so you can keep a tally of all the forgotten 80’s tunes you’ll now want to add to your playlist.

Sue, you are right on about this show across the board.
The plot is a kind of super-pastiche of 80’s tropes but it is very well paced and extraordinarily (I might say startlingly) well acted. I cannot remember when I last saw a group of child actors with such skill and appeal.

There’s a wide array of things to enjoy about Stranger Things, thrills, acting, nostalgia, even the pulsing 80’s synthesizer score, but I think a good part of the pleasure comes from encountering something crafted with such love, care and attention to detail.

Black Gate Readers: If any of what you’ve heard about this show makes you wonder if it’s worth watching, tune in.

I just finished watching this series—-freaking amazing!!!! I can’t wait to rewatch it!

One of the many things I loved was the John Carpenter style synths. Great mood builders.

Glad to know I am in good company on this one. Watched another episode last night and fought the urge to just stay up and binge the rest. Netflix really scored on this one and I want to adopt every one of those kids.

Ok, not really but just sayin’…

More power to you for not binging. I think the show is put together with such attention to detail that binging is a disservice to both the viewer and the show’s creators.

Some members of my family missed it the first time around so Stranger Things is getting a second showing at my place, and after a few cursory attempts to abstain, I’m watchIng it again.
I never do that.

Clearly the Black Gate audience has great taste and I thought Netflix should know what raving fans we all are. I’ve contacted them so they can read all your comments.

Stranger Things has already been green-lighted for a season two, but maybe they’ll send us all tee-shirts or something…

PS: I’ve already decided I’m going to watch it again, once I’ve been through it the first time. I know there’s stuff I’m missing.

Although there is much talk on-line about the influences that helped shape Stranger Things, I noticed one thing about the show that I don’t believe I’ve ever seen on the screen.

And that’s the way the kids communicate easily, effectively, and emotionally through genre and roleplaying references.

And better still, this is often underplayed and not explained to the viewer.
Dustin’s comparison of Eleven’s mental abilities to those of Professor X is tossed off and unexplained, but Mike’s nod and grin in response show that this was understood as a valid interpretation and attempt to understand the situation.

Man, EVERY group of roleplayers, every group of genre-reading friends, does this kind of stuff. Never seen it displayed so clearly on screen.

I watched the first episode, and I liked it. But I’m a bit surprised at the gushing love for it here at BG. Like it’s akin to the first Star Wars movie.

Just an observation. I’m halfway through episode two and will stick with it.

Really, I’m just jealous that my ‘Arsenic and Old Lace’ post didn’t get any comments and you fired up the BG group. There, I said it!

I suppose I could actually start doing some work now. Being at the office and all…

Saw it all. That was a pretty good series.