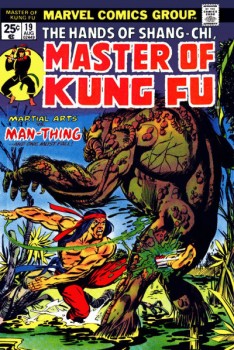 Master of Kung Fu #19 was the final issue scripted by Shang-Chi’s creator, Steve Englehart. While the idea of a guest appearance from Marvel’s swamp creature, Man-Thing was an offbeat idea, the issue is more notable for the influence of the television series, Kung Fu. This influence is felt strongest in the philosophical discourse on pacifism conducted throughout the issue by Shang-Chi and his fellow Chinese visitor to  the Everglades, Lu Sun (a character clearly based on Kwai Chang Caine from Kung Fu). Shang-Chi admires the pacifist philosophy but the unremitting pursuit of a pair of Si-Fan assassins, (an Asian and Arab double act known as Jekin and Dahar) make it impossible to put it into practice.

Shang-Chi’s memories are colored by the realization of his father’s immorality. The childhood flashback (a familiar conceit from the Kung Fu television series) employed here serves to underscore the point that as the pieces of the puzzle come together for Shang-Chi, he is left more fragmented than before. This conundrum is one that Steve Englehart was leaving for future issues to build upon.

An intriguing sub-plot sees Sir Denis Nayland Smith and Black Jack Tarr launch an assault on Fu Manchu’s convoy of trucks as he abandons Florida following Shang-Chi’s successful sabotage of his operations in the preceding issue. While the casualties on the side of the Si-Fan are heavy, the mastermind makes his escape in the Everglades leaving Sir Denis facing another hollow victory. The Man-Thing is almost superfluous to the plot, but his position as an unwitting pawn in others’ games mirrors Shang-Chi’s own place as a man who strives for peace on a battleground.

Issues #20-21 form an ambitious two-part storyline that sees Shang-Chi targeted by a mob hit in Miami. Paul Gulacy’s artwork takes a quantum leap forward in quality and establishes a look for his characters that, at times, is photo-realistic. Allegedly, the villain of the piece, Demmy Marston is the likeness of Jim Steranko. The entire two-part storyline has the feel of a 1970s crime film. The piece appears to have begun as a storyline intended for the black & white companion magazine, Deadly Hands of Kung Fu. Gerry Conway’s 8-page opening chapter has much more of an adult feel particularly with Marston depicted as physically abusive to his bikini-clad mistress.

Marston runs a literal floating casino (aboard a yacht just outside the legal limit) with evident mob connections. Having heard word that Shang-Chi has a price on his head from the Si-Fan, Marston attempts to score a coup by dispatching his own hired killers to assassinate him. Their failure leads him to task his right hand man, Bufford Jones with hiring an exiled Japanese samurai called Korain to finish the job.

This leads into the second chapter (Doug Moench’s first script for the series) where Shang-Chi tracks down Marston ‘s yacht with the samurai close behind. Shang-Chi knew of Korain as an aged samurai who retired from the Si-Fan when Shang-Chi was a child. He soon learns the samurai has a supply of Fu Manchu’s elixir vitae which has restored his youth. Korain’s chemical dependency is the death of him when his heart gives out during their confrontation, but Marston’s mistress is inadvertently killed during the conflict. 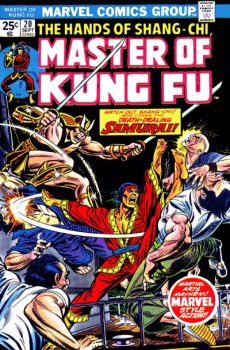 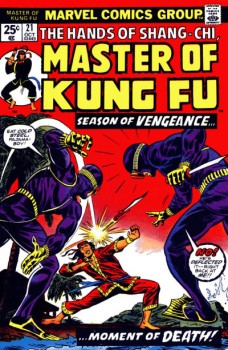 The second half (parts three and four) see Shang-Chi visiting Miami’s Marine Land afterhours unaware he has more mob assassins following him. Shang-Chi is tormented that innocents continually die in conflict wherever he goes. Marston is behind these assassins and very nearly succeeds in avenging his mistress’ death when the Si-Fan unexpectedly arrive and Fu Manchu himself turns up to dispatch Demmy Marston for his arrogance and poor judgement. The unexpected finale sees Fu Manchu leaving his son barely alive with the chilling remark that he will determine the time and method of his son’s death and no other. Shang-Chi is abandoned on an island in the Florida Keys as his father decides there is no honor in executing his son when he has already been beaten by a lesser foe.

The phenomenal success of the monthly series and the companion magazine led to the launching of the quarterly title, Giant-Size Master of Kung Fu. Many of Marvel’s quarterly Giant-Size titles were rush-jobs filled out with reprints from defunct Atlas Comics anthologies. While Doug Moench and Paul Gulacy acquit themselves well, there are indications they were feeling the deadline pressure throughout.

The first issue opens with Shang-Chi in New York just after midnight at the corner of 57th and Madison Avenue (then the offices of Marvel Comics) where he finds he has been hung in effigy. This unlikely sight in such a public place is a mere distraction as he is set upon by two Si-Fan assassins. Their vicious battle takes them from the street to the sewer and sees both assassins choosing cyanide capsules when they fail to kill Shang-Chi. Before their deaths, the assassins deliver a message from Fu Manchu that he intends to kill his son this day, Shang-Chi’s birthday.

An attractive Asian streetwalker is injured in the conflict. Shang-Chi helps her home to her apartment where she attempts to seduce him, but proves to be another Si-Fan assassin herself. Shang-Chi viciously strangles her with her own hair. She escapes him and deliberately hurtles herself through a window falling to her death several stories below in a surprisingly violent sequence that inexplicably passed the Comics Code for approval.

Fu Manchu is shown plotting from his downtown New York base of operations. The issue introduces his concubine, Ducharme and is the first to feature the Si-Fan Council of Seven. However, in a departure from Rohmer, this latter-day Council of Seven is comprised of the Si-Fan’s seven greatest assassins (not much of a council then, really). Shang-Chi has succeeded in infiltrating their ranks. The secret society’s meeting is depicted in a fashion that would have made Rohmer proud. The clandestine meeting ends with Shang-Chi attacking and dispatching each of the assassins before his father escapes by helicopter. 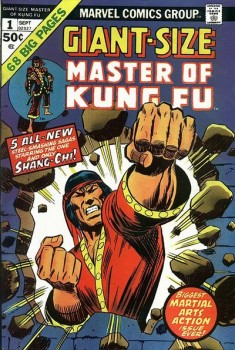 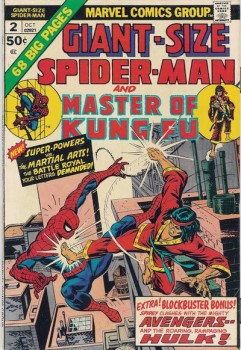 The back-up feature follows the monthly title’s continuity much more closely and sees Shang-Chi seeking low income housing in Miami only to be turned away by the bigoted landlord. Before he can reflect upon this, he is set upon yet again by paid assassins hired by his father. From a sniper drama on the streets of Miami to a dramatic chase through an abandoned building, Shang-Chi takes on all three assailants in a daring rooftop confrontation. One of the hitmen escapes and Shang-Chi pursues him. The drama ends with a hostage situation in which the bigoted landlord is being held hostage by the assassin. Despite having been the victim of the man’s bigotry, Shang-Chi risks his life to save someone who refused to shelter him because of the color of his skin.

DC Comics pioneered the rotating team-up books in which Batman or Superman would team with another character for a single issue adventure before moving to the next all-star team-up. In the 1970s, Marvel would follow suit with team-up titles for both Spider-Man and the Thing. Giant-Size Spider-Man #2 was actually billed as Giant-Size Spider-Man and Master of Kung Fu and is essentially a team-up issue. Unsurprisingly, Len Wein’s script and Ross Andru’s art are very much in the Marvel style. Having writers channel Stan Lee’s distinctive narrative voice combined with having artists mimic John Romita’s style tended to produce a generic Spider-Man look that was consistent throughout the decade.

The story sees Spider-Man and Shang-Chi set up by Fu Manchu with each believing the other is a criminal. The issue starts with Spider-Man thwarting a museum heist and being told that the culprits work for Shang-Chi just before all of the criminals are savagely electrocuted by an unseen power. Meantime, Shang-Chi in New York again, comes upon a street gang dressed as Spider-Man who are beating an elderly Asian man to death. Shang-Chi lets Spider-Man’s alleged gang escape in order to tend to the dying man who asks to be taken to Sir Denis Nayland Smith.

The scene shifts to Sir Denis’ residence where Shang-Chi brings the dying man to Smith and Black Jack Tarr. Before he expires from his injuries, the old man tells them Fu Manchu has hired Spider-Man to destroy a power plant and cripple New York. Shang-Chi sets off to avenge the old man’s death. The battle between the two heroes is well-executed and shows them to be fairly equally matched (admittedly, Marvel was not very consistent when it came to measuring a character’s strength). One of the evident weaknesses is the story is overly dependent upon contrived coincidences. This is most obvious once Shang-Chi and Spider-Man realize they are being deceived, they happen to thwart an attempted assassination and discover the target was an informant of Sir Denis who is able to tell them Fu Manchu’s actual scheme is centered at the Empire State Building.

The ending is far too rushed as helicopter assaults on and escapes from the Empire State Building are crammed into far too few panels to adequately telegraph the story’s conclusion with an appropriate sense of pace. The shifting narrative voice also hampers the reader’s enjoyment. Still, the quarterly makes a real effort to respect the continuity of Master of Kung Fu to the extent that the team–up seems little more than an excuse to generate greater awareness of the title from the exposure provided by the more mainstream readership of Spider-Man. All in all, a better effort than it might have been from an era when comics were produced quickly and almost entirely intended as disposable fun.

Thank you so much for another great review,

…I have not read or seen Mater of Kung Fu #19 in…probably 40 years? But as soon as I saw the cover, and read your interesting summary (I did not realize this was Englehart’s last ish), the visual memories come flooding back 🙂

I never know what gems I will come across on Black Gate, but the amazing quality and variety of articles like this keep me hooked.