Guy Haley is the author of The Emperor’s Railroad and The Ghoul King, the first two books in The Dreaming Cities from Tor.com Publishing. The tales of the fortified city-states that still stand a thousand years after global war devastated the environment and a zombie-like plague wiped out much of humanity, they take place in a world of constant conflict, superstition, machine relics, mutant creatures, and strange resurrected prehistoric beasts that roam the land. Learn more on our recent contest page.

But as you’ll see in my conversation with Guy below, he’s written more than just these two books — a great deal more. His other works include two Richards and Klein robot detective novels from Angry Robot, the space opera Crash, and a wide assortment of popular books in the Warhammer setting, including Baneblade (2013), The Death of Integrity (2013), Valedor (2015), The Rise of the Horned Rat (2015), Throneworld (May 2016), Death of the Old World (June 2016; an omnibus collection also featuring BG author Josh Reynolds), and no less than five more scheduled for publication before the end of the year:

Yes, you counted that right: that’s a total of nine books appearing between April and November of this year; seven from Black Library and two from Tor.com Publishing. How does he do it?? Let’s find out.

A sample of the Warhammer 40K novels from Guy Haley this year: Throneworld (May), Pharos
(paperback reprint coming in August), and The Beheading (November)

Ahoy Guy! Thanks for taking time off between all that writing to be interviewed at Black Gate!

I first came to your work through your Warhammer books, especially Baneblade. Recently you’ve branched out with several successful titles of your own, including your Richards and Klein novels, and Champion of Mars. Where did you get your start? With Black Library, or on your own?

Well, actually, it’s not recently that I wrote those books. I think there’s this preconception that you start on tie-in fiction and move on to your own thing. I actually started doing both at the same time.

The first novel I had published was Richards and Klein: Reality 36 which was followed by Baneblade, my first BL novel. Champion of Mars was published in 2012. Generally speaking, most of my work is for the Black Library, but I write at least one original piece a year. This year it’s been part two of The Dreaming Cities and the second book of a series I write under another name.

Three books in the Space Marine Battles series: The Death of Integrity (2013),
the anthology Sanctus Reach (2015), and the upcoming collection Crusaders of Dorn (September 2016)

I suppose my start was with neither BL or indeed fiction at all. I’ve been a professional writer since 1997 when I joined the staff of SFX magazine. I worked on magazines for twelve years after that, including a stint as editor of Games Workshop’s White Dwarf. The last magazine I worked on was Death Ray, which was founded as a rival to SFX by the man who originally created it. That went bust in 2009.

Fortunately, I had just secured contracts for Reality 36 and Baneblade the same month. I started my own business then as a freelance journalist, editor and novelist, and over time my non-fiction work has been entirely superseded by my fiction.

At first I wasn’t writing very much as I was a stay at home dad with an infant son. As he’s grown, so has my career. I now write around five novels a year, as well as a number of short stories and the occasional other piece of work. Last financial year I did the script for a game, some advertising copy, that sort of thing (simply for convenience sake, I always categorize what I do by financial year, which in this country runs April-April).

It’s the only way to survive financially as a full-time writer. There’s so much competition now, it’s rare to get a royalty payout of any size unless you have a big hit (though my Black Library stuff usually does okay there). It sounds more than it is, I suppose – some of them were very short novels, but on saying that, I’ve written over 250,000 words since January.

I very much see myself as proceeding in the tradition of the pulp writers. The trick is to attempt to emulate the great ones, like Moorcock, Ellison, or Silverberg, and not end up like one of the many rubbish ones nobody remembers. I read an interview with Robert Silverberg once where he said he was writing 1 million words a year at his peak. Now that’s impressive.

Is all that in the SF and fantasy market? Do you write exclusively under your own name?

It’s nearly all SF and fantasy. I did write a Sherlock Holmes story earlier this year, but otherwise, yeah, all dragons and robots.

I write mostly under my own name. There is one fantasy series I have out under another, but I’m not at liberty to divulge what that is that yet.

I’m really intrigued by the setting of The Dreaming Cities tales — it’s certainly fits that pulp tradition you mentioned. What made you decide to do it as a series of novellas?

It was the opportunity that dictated they were novellas rather than a conscious choice to write a novella series, if you see what I mean.

I have known Lee Harris, the book editor at Tor.com, for a long time. He published my first short story on his ezine Hub, and my first book, Reality 36 when he was at Angry Robot. I found out that he was launching a new line of novellas. I had a couple of ideas that I thought might fit, so I pitched them. He liked The Dreaming Cities.

However, although the series has obviously been conceived to fit a novella format, I think by its nature it suits an episodic, medium-length form. And it is very much episodic. It is supposed to work like a TV show, with each story being a self-contained episode in an ongoing story.

I love that idea. I’m a huge fan of episodic fiction (speaking of the pulp tradition…), but too many series are just too big a time commitment. The novellas are perfect — I can read them on the train ride into work in the morning. I can finish one over two nights, and I’m a painfully slow reader.

Are you committed to novellas for the whole series, or could it branch into novels? (I don’t want to get you in trouble with your editor… answer in code if you have to. One exclamation point for yes, two for no.)

There could be novels. It all depends on how successful they are. Writing the way I do is about opportunity and the market’s appetite rather than personal plans. At least, that’s the way I approach it.

Gotcha. The Emperor’s Railroad came out in April, and The Ghoul King arrived last month. Assuming the series is successful — and based on the critical feedback I’ve seen so far, it sure looks like it is — what’s up next? And do you intend to keep up that pace?

Well, it’ll be a while until the publisher will know the numbers and be able to make a decision. So I suppose the earliest we’ll see another Dreaming Cities book will be at the end of the year. I’ve already decided what happens next, and begun writing it in my head. We’ll delve into Quinn’s background a little, and there will be more information as to why the world is the way it is, and a little more on the nature of the Angels.

My intention with the books is to have at least one revelation per story about the world. I’m all for mystery and feeding out information piecemeal, but there’s a fine line between teasing and frustrating people.

After that, the second story arc will change a gear begin to head for epic territory.

I intend to keep up this pace of work for a couple of years yet, but what I write depends on who commissions what when. If I were to devote all my time to Quinn I could write a novella every month. I’m not in a position to do that now, but who knows what the future will bring? When the time comes, I’ll be able to provide more Dreaming Cities books quickly.

Let’s talk about some of your other projects. Will there be any more Richards and Klein novels, for example?

I’d like there to be, but they didn’t sell well enough for the publisher to ask for more. In the end, it’s all about sales. I keep promising myself that I’ll self-publish more short stories and novellas featuring R&K, but other work gets in the way every time.

I’ve heard that tale before. What else are you working on?

I’m writing back-to-back novels for the Black Library. You can expect a lot of books from me about Warhammer over the next two years. I’ll be taking a break from that early next year to write the next part of my pseudonymous fantasy series, but for the time being it’s 40k all the way. But if more Dreaming Cities books are needed, I’ll find the time to write them! 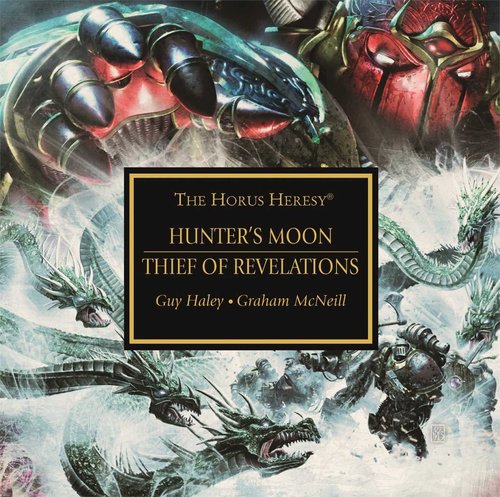 I’m a huge fan of the Horus Heresy audio dramas — I’ve lost count of how many I’ve listened to at this point. Tell us about “Hunter’s Moon,” your half of the dual CD released in 2014. Was that your first Horus Heresy fiction? Is is linked to your upcoming novel, Pharos?

“Strike and Fade” was my very first Horus Heresy story. It was a very short audio published in the advent run by BL in 2012.

“The Shards of Erebus” was my first ‘proper’ Horus Heresy story, that was published in 2013 in the Mark of Calth anthology. I’ve written nine Horus Heresy stories now. “Hunter’s Moon,” on the same disc as “Thief of Revelations” by Graham McNeill, fell about halfway through my run on the Heresy… That story, which featured an ocean planet, dealt with the effects of the war on ordinary people, all within the context of ass-kicking boltgun action, naturally.

Pharos has actually been out for a few months, though, the paperback isn’t out until later this year. “Hunter’s Moon” isn’t connected to it, but the short stories “A Safe and Shadowed Place” (from Legacies of Betrayal) and “The Laurels of Defiance” (Sedition’s Gate) are.

I listened to “Strike and Fade” on the Echoes of Ruin audio CD last year. I thought it was one of the strongest stories in the collection — a terrific action piece set after the Isstvan V massacre.

Tell us a bit more about the back-to-back novels you’ve got coming up from the Black Library.

I can’t reveal too much. Games Workshop likes to keep its release plans close to its chest, understandably, and my schedule goes out a long way. I can say that I’m just finishing a book about Commander Dante of the Blood Angels, and I have a sequel to Baneblade called Shadowsword out later this year. Other than that, I’m writing bits of everything, including some really exciting stuff I can, of course say nothing about.

Many thanks to Guy for the great interview, and to Mordicai Knode at Tor.com Publishing for setting it up! Our most recent article on Tor.com is here, and our latest Warhammer coverage is here.

I loved this interview. Good to meet you, Guy. From a writer’s perspective, I have to say your work ethic is amazing. I felt pretty guilty about my excuses after reading this.