Early on I was inclined to be charitable about Star Trek V: The Final Frontier and I wasn’t really sure what all the fuss was about. As you may be aware, the consensus seems to be that it was one of the worst of all of the Star Trek movies.

But up until about the halfway mark I didn’t quite get it. Not that the first half of this movie is a masterpiece, mind you. But as the second half began to unfold I started to catch on.

The plot can be dispensed with in a few words. Spock’s half-brother — one of those free-spirited emotional Vulcan types — commandeers the Enterprise and sets off to the center of the galaxy to find God. Which doesn’t seem to be all that far removed from the premise of the first Star Trek movie. Which also featured an abundance of scenes of people trying to look awed but mostly looking dopey. Since there’s little drama or interest to be found in this premise there’s also some standard stuff about Klingons with bad intentions lurking about.

After it was all over I found myself a bit befuddled, mostly by all that God stuff and what actually transpired. I’m not always the most attentive viewer and it didn’t seem clear to me. So I did some additional research into the matter, at Memory Alpha, the well-known Star Trek site. Which suggests the following:

It is now apparent that the this is not the God of Sha Ka Ree, Spock says, or any other God but merely a malevolent life form imprisoned on this planet behind the Great Barrier and it simply needs the Enterprise to escape.

Well, it wasn’t apparent to me, buddy. As for the notion that The Final Frontier is the worst of the Star Trek movies, I’ll say that it’s certainly in the running, so far.

When people go camping centuries in the future they will dress exactly like we do today.

When people drink whiskey centuries in the future the bottles will look exactly like they do today.

A periscope on a Klingon ship? Seriously?

Is it just me or was Uhura’s dance scene one of the low points of the movie? 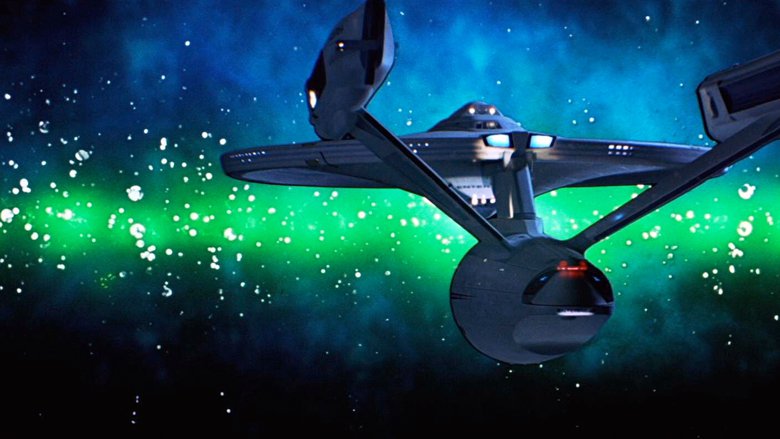 The special effects for God (or whatever it was) could have used a lot of work.

I know I’m beating a dead horse but…pointed sideburns. In this installment some of them looked like they were sharp enough to pop a balloon.

William I. Lengeman III’s last article for us was Here Be Spiders: Arachnophobia & Arachnoquake. He holds forth at www.wileng3.com.

I realize that my perspective is not the common one for star trek. I watched Into Darkness and enjoyed it enough that i went back and watched the original series over a year’s time.

After that I watched all six movies in a period of about three months. Final Frontier might be towards the bottom, but its not nearly as bad as everyone says it is.

The Motion Picture has not aged well, and I get what it represented when i was originally released in 1979. You would have to edit out 90% of the constant slow panning shots of the ships before i would watch The Motion Picture over Final Frontier and even then it moves at a snail’s pace.

Yes, Uhura’s dance was weird, but no one seems to mention the scene that hit me the most. McCoy’s flashback with his dying father. I thought that was an excellent look at what makes the character tick.

The first time I saw STV: The Final Frontier it was on a 12″ black&white tv. I couldn’t actually see how bad the special effects were so I was able to actually enjoy the story. To this day I still like it even though I have seen it on better tvs where I could see how bad the effects are.

From the day I first saw it, The Motion Picture has been my least favorite Star Trek film. I don’t even think it was a good movie in its own right. Among its flaws, it’s dull.

So, all of the movies starring the original cast (and ones for TNG and the reboot) rank higher on my list than the Motion Picture.

I know it’s not very good, but I’ve always been fond of The Final Frontier. How many other movies are about people literally searching for God with a spaceship? I like its exploration of alien/future religion, and its theological questioning recalls a few episodes of TOS. And I think Kirk has one of his best moments toward the end, with his impertinent “Excuse me! Excuse me!”

There’s a moment when Sybok talks about all these breakthroughs in science and exploration, and suggests that, at long last, we might find God at the top of the ladder, beyond “the final frontier.” The movie, which, incidentally, opens with a very physical encounter with the material cosmos (i.e., Kirk falling off a big rock), asserts that this isn’t the right way to think of God at all. In the end, Kirk concludes that God is not “out there” but “in here.”

So, though it might be a failure as a movie, I appreciate The Final Frontier for continuing the Star Trek tradition of grappling with big questions, unlike the reboot series, which is fun but tends to focus more on blowing stuff up.