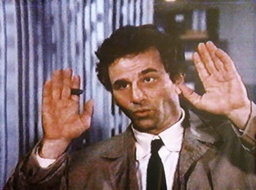 The mystery field is full of great detectives and private eyes, both amateur and professional, created by authors. Hercule Poirot, Nero Wolfe, Father Brown, Inspector Morse, Sam Spade, Philip Marlowe, Mike Hammer, The Continental Op: and of course, Sherlock Holmes. The list goes on and on.

There have also been quite a few detectives created for television. McCloud, Matt Houston, Magnum PI and Jim Rockford to name a few. The germaphobic Adrian Monk was immensely popular. But perhaps the supreme television detective is Inspector Columbo.

A prototype Columbo, if you will (heck – even if you won’t), appeared in Enough Rope: a 1960 episode of The Chevy Mystery Hour, played by Bert Freed. It was then turned into a play, Prescription Murder, starring Thomas Mitchell, who died of cancer during its run.

Next, the play evolved into a two-hour television movie. The under-appreciated Lee J. Cobb was approached but unavailable and Bing Crosby turned down the part (imagine that). Though he was considered too young at the time, Peter Falk was given the part and the movie aired in 1968.

The network ordered another TV movie to see if a series was feasible. Ransom For a Dead Man did well and Columbo became part of a rotating series of shows, including Dennis Weaver’s McCloud and McMillan and Wife, with Rock Hudson.

Columbo ran on NBC from 1971 to 1978. ABC revived the show for series of TV movies from 1989 through 2003. Falk was attempting to sell one last Columbo movie project to the networks, but he suffered from dementia and died in 2011.

Falk appeared as Columbo 68 times in all and he won three Emmys for the role.

Just One More Thing – Before she was Star Trek: Voyager’s Captain Janeway, Kate Mulgrew starred in Mrs. Columbo. In this short-lived spin-off, she played Columbo’s reporter wife, investigating crimes and raising her daughter.

A key element of most mysteries is “Whodunit?” We read or watch along with the protagonist, trying to solve the crime ourselves. But Columbo doesn’t work that way. The story opens by setting up, then showing us, the crime (usually a murder). We know who did it five or ten minutes into a sixty or ninety minute show. The focus of the mystery is now on watching Columbo gather the evidence he needs to figure out who did it. This is known as the ‘Inverted Mystery.’

The key to making an inverted mystery work is having a compelling hero. If Columbo were a boring, or unappealing central character, the show would fail. We already know what happened and who is guilty. It’s the rooting for a compelling character that invests us in the rest of the show. And Peter Falk nailed it. 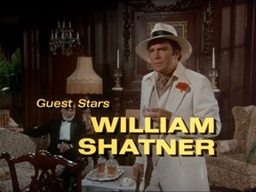 The plots vary, but the episodes are basically the same. The villain establishes a relationship with Columbo and they interact often during the episode. The villain inevitably thinks they are smarter than Columbo (truly, pride goeth before a fall). And he lets them think that, constantly acting as if he can’t find things, seeming out of place, agreeing with misleading statements the antagonist makes, wearing a rumpled raincoat and driving a decrepit car. He seems like a fool.

Back in 1976, a few years before the first Star Trek movie revived his career, William Shatner guest starred in Fade in to Murder. He was actor Ward Fowler, who was starring as Detective Lucerne in an extremely successful soap opera.

Just One More Thing – Sgt. Johnson in this episode is played by Walter Koenig – Chekov from Star Trek.

Fowler killed his producer, a former lover who is now blackmailing him. Fowler, in his character of Detective Lucerne, actually works with Columbo to solve the crime. Columbo, who watches the show with his wife, is thrilled to work with Lucerne and seems to be letting him lead the investigation. Columbo even gets caught imitating Lucerne.

You really need to watch this episode to see how Shatner plays his character outsmarting Columbo throughout, while the policeman seems to keep somehow stumbling on to the next clue. It’s vintage Columbo and it’s a fine performance by Shatner. Who doesn’t…take…long…pauses.

A feature of the show was that leading actors and actresses of the day guest starred: usually as the villain. It’s fun to watch them trying to outsmart Columbo every show. Leonard Nimoy made a particularly memorable appearance in A Stitch In Crime a few years before.

Every episode, Columbo would be leaving a scene with the villain, the latter thinking they have once again manipulated him or maintained the upper hand. He would be on his way out the door or to his car or whatever. Then Columbo would turn around, say “Just one more thing” and hit them with something they weren’t ready for. Often it was a little thing, but it would be important. Tony Shaloub would use this trick as Monk.

I don’t think I could sit down and watch ten consecutive episodes of Columbo. But every time I do watch one, I’m entertained. Peter Falk is simply that good in the role. The original NBC series is usually streamable on Netflix and I highly recommend watching at least a few episodes. Columbo is one of the great television shows and the character is an important part of the mystery genre.

His “The Adventure of the Parson’s Son” is included in the largest collection of new Sherlock Holmes stories ever published. Surprisingly, they even let him back in for Volume IV!

They still show the series pretty regularly on some satellite channel. Like you, while I wouldn’t necessarily go out of my way to catch an episode, you inevitably get drawn in. Some I saw first time round. Others are unfamiliar to me. I remember the Shatner episode well (especially how he establishes his alibi) and the Nimoy episode too. And didn’t Eddie Albert play a five-star general in one? I’m pretty sure Patrick McGoohan played the villain in at least three (and directed quite a few as well – clearly he was a big fan).

I should have added that the Hallmark Mystery and Movie Channel shows Columbo almost daily.

I watched the Nimoy episode yesterday, after having written this post.

McGoohan was actually offered the part of Columbo during a network beef with Falk. McGoohan turned it down because he and Falk were friends. Lieutenant Columbo is truly one of the great classical detectives, right up there with Holmes, Father Brown (who he was partially based on), Hercule Poirot, etc. I much prefer this kind of show to the current CSI/forensics variety, which has a veneer of realism but which is at bottom just as fantastical as the doings of the Lieutenant – and a good deal less charming.

I have the entire series on DVD, and never tire of watching them. No extras though, which is a – shall I say it? – crime; it would have been wonderful to have some commentaries by Falk or at least an interview, to give insight into his view of the character. For instance, the few times that he loses his temper with a suspect (silly to call them that, I suppose, because Columbo always knows instantly who’s guilty) – Nimoy is a good example – I’m never entirely sure if Columbo has really gotten angry or if the loss of temper is just another cooly calculated tactic. I think the latter, but I would like to have head Falk’s take.

In some ways, the pilot (prescription Murder) is the best episode of them all, with Gene Barry as a psychiatrist who teams up with a floozy actress to murder his wife. It’s interesting to see the aspects of the character they decided to discard or downplay and those they decided to emphasize, though Columbo is still fully Columbo – Falk had a firm handle on him from the beginning. The rumpled, slovenly aspect is there, but not to the degree of later shows, and at one point Columbo gets very strong and confrontational with the actress accomplice. They clearly decided that that was something they weren’t going to do much; indirection was his best method. It’s also good because it’s one of the few “fair fights” Columbo ever had – as a psychiatrist, Barry pretty quickly sees the game Columbo is playing and he lets Columbo know that he’s on to him. And the ending is absolutely priceless – when Barry, even warned as he is, is still outsmarted by Columbo, literally at the goal line, there’s a shot of Barry realizing what’s happened, and then a reaction shot of Falk, with a look on his face that says, “Aw, Doc – you almost made it,” a mixture of satisfaction mixed with pity and even, almost, regret, that floors me every time. It’s simply great acting.

The plots are sometimes silly, but the character never stales for me. And, as you say Bob, it’s great fun to see the famous and near famous soon to be famous making their appearances. It’s just a great show.

I don’t think I could sit down and watch ten consecutive episodes of Columbo. But every time I do watch one, I’m entertained. Peter Falk is simply that good in the role.

That pretty much sums it up.