HP Lovecraft is a bit like Bill Haley; he arguably created his own genre, but few people now consume his work for simple pleasure.

Just as modern people typically discover Rock and Roll through [your favourite band here], they come to the Cthulhu Mythos through Charles Stross’s Laundry Files(*), through the madness of the Cthulhu Fluxx cardgame, or through the roleplaying game Call of Cthulhu.

Kids…? Well my daughter (8) has a plush Cthulhu who spends most of his time in the naughty corner for trying to eat the faces of the other toys.

Nobody, typically, just happens to pick up an HP Lovecraft book. If they do, they probably bounce. Let’s just say that speculative fiction has produced better stylists and that “of his time” is proving to be less and less able to explain away his racism.

However, unlike Bill Haley, Lovecraft still owns his genre. He pretty much nailed Cosmic Horror, and though we have chipped off racist carbuncles, all the tropes still bear his mason’s mark.

This means that Lovecraft’s Mythos serves the the same function in the Geek community as the Classical world served amongst educated Victorians. They would remark on somebody being “Hector-like”, we joke that our  pasta bake “turned into a Shoggoth”.

This creates the interesting problem that the our shared subculture leans heavily on a set of texts that are increasingly unreadable for both literary and ethical reasons!

The answer, of course, is to retell the stories in other media, which is where books like Charles Cutting’s graphic novel Kadath come in.

It’s one of the several graphic novels I received for review from Sloth Comics and, as you might guess, it’s his take on Lovecraft’s Dream-Quest of Unknown Kadath (online text).

Randoph Carter, Olympic-standard dreamer, explores the Dreamlands — a kind astral Second Life — on a quest for the Sunset City. Along the way he must deal with exotic Zoogs, sentient cats, and alien forces.

Lovecraft’s original prose story is… a bit weird as a book. Its lush text has a hypnotic quality and its unfolding strangeness makes up for the lack of plot. The effect is similar to the 18th-century Vathek and it’s clearly Cosmic Horror filtered through Lovecraft’s literary aspirations and influences.

This lack of plot presents a bit of a challenge to an adaptor since something is needed to carry the story to any kind of length. More swordfights and explosions — my goto — would rather spoil the atmosphere, so Cutting instead does something more subtle and possibly more literary.

First, the author turns Carter into an unreliable narrator, and unpleasant to boot: his self image and narration is often comically at odds with the way he bullies and blackmails his way across the exotic world leaving little tragedies in his wake. Just like the imperialist Great Powers of Lovecraft’s time, he never realises the hypocrisy of looking for beauty in such an ugly manner.

Second, he throws in an underlying conspiracy that permeates the story with the kind of existential horror that Lovecraft was good at… but to say more of that would be a spoiler. Suffice it to say that the touch is just light enough that we never lose sight of the wonder of the setting…

Which takes us to the art.

Charles Cutting clearly had great fun bringing the Dreamlands to life. A British artist, he has given them a British feel. It’s like the lovechild of Brighton Pavilion and Portmeirion as raised by Michael Moorcock.

It felt instantly right for the Dreamlands, and also served to put the uptight pompous Carter firmly in his place; albeit visually.

So I enjoyed this graphic novel.

Is it suitable for children? (It doesn’t have to be, but parents like sharing their geekery.)

The art is lovely. The quest narrative is crisp and well told. It’s certainly an accessible entry into the Mythos. 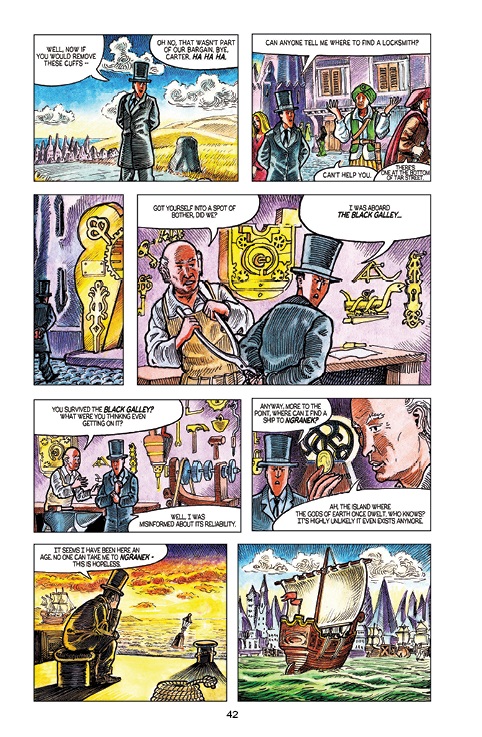 Some quite young children would appreciate the way Carter is an ass (in the Shakespeare’s Bottom sense, not your American slang, thank you very much) and does not know it. Others would miss that entirely and be confused by such an unsympathetic hero

One amoral character committed suicide in order to stay in the Dreamlands — I’m perhaps not comfortable with planting that idea. And then the afterword is a short, amusing but tasteful, comic strip entitled Did HP Lovecraft Die a Virgin…

So perhaps this is one for older children only — which is fine, because we adults also deserve to enjoy the wondrous weird, and there should be books for us, and this is certainly one of those and I shall enjoy revisiting it from time to time, as much for the art as for the story.

M Harold Page is the Scottish author of works such as Swords vs Tanks (Charles Stross: “Holy ****!”). For his take on writing, read Storyteller Tools: Outline from vision to finished novel without losing the magic. (Ken MacLeod: “…very useful in getting from ideas etc to plot and story.” Hannu Rajaniemi: “…find myself to coming back to [this] book in the early stages.”)

I especially like what Cutting does with the cats of Ulthar. Randolph Carter would be toast without those cats coming to his rescue. In that page you include Cutting makes them powerfully benevolent and charming without making them corny — a hard tightrope to walk. When I see this graphic novel in a convention dealer’s room, I’ll definitely be picking it up.

The Dream Quest is by far my favorite Lovecraft piece, the only one I’ve read that doesn’t quickly devolve into unintentional comedy. I’m glad to see the Dreamlands getting some sustained attention.

“The Dream Quest is . . . the only one I’ve read that doesn’t quickly devolve into unintentional comedy.”

Cats saving Carter? You don’t think that devolves into unintentional comedy? I think the scene of those cats playing after the battle (if I’m remembering correctly) is one of the goofiest things I’ve ever read in Lovecraft.

I actually like the Dream Quest too, but there are several scenes in it that I think devolve from a dreamy quality (which is what I think Lovecraft was shooting for) into the (unintentionally) ridiculously absurd.

Lovecraft could never quite do Dunsany like Dunsany did.

The cats in this are like real cats, in that they eat the Zoogs.

Those plush Cthulu–s are the bomb. I think Lovecraft would translate nicely into a graphic novel.

This looks interesting! I love seeing different graphic interpretations of Lovecraft. I don’t know if this has been commented on before in Black Gate, but there’s another graphic novel Dream Quest interpretation by Jason Thompson at Mockman Press which I’m very fond of and is worth a look.

Yes I came across that. I hope to take a look some time soon.