In the May, 1953 issue of Galaxy, Editor H. L. Gold opens with some thoughts on science fiction and the future. He writes:

Does good science fiction, then, pretend to describe the actual future? No, certainly not. Anyone who thinks so is missing the point… We’re having fun with ideas, making first this one and then that predominant just to see what might happen if.

“Wherever You May Be” by James A. Gunn — Matt Wright is heading to a hunting cabin in the Ozarks to write his thesis but has car problems. While he’s trying to get it running again, he finds a young woman named Abbie laughing at him. She ran away from home and hopes to go with Matt, but he’s not about to take in someone claiming to be 16 (she’s actually 18), so he takes her home to her father. Matt expects to find signs of abuse but finds the older man wants to be rid of his daughter — as though he’s afraid of her.

When Matt finally reaches the cabin (after getting lost a few times), he finds Abbie waiting for him. Given the late hour, he decides to let her stay. She tells him that sometimes things happen around her — objects moving as she thinks about them. Yet as he tests her abilities, she seems unable to do anything, unless she becomes upset.

Matt decides that she will be his new research paper, though she doesn’t know it. He could run all kinds of tests on her abilities. Except that it’s clear that she’s happy being with him — that she likes him. So he considers a way to enhance her powers — by breaking her heart.

I still can’t decide how I feel about this story, so I credit it with sticking with me. Abbie’s character anchors the entire story. But I just can’t stand Matt. And I don’t like the ending because I feel it cheapens Abbie’s character and pardons Matt. I think there are other ways that could have led to a similar conclusion without leaving me a bit jaded. Regardless, as I said, the story stuck with me, even with the ending (or maybe because of the ending). 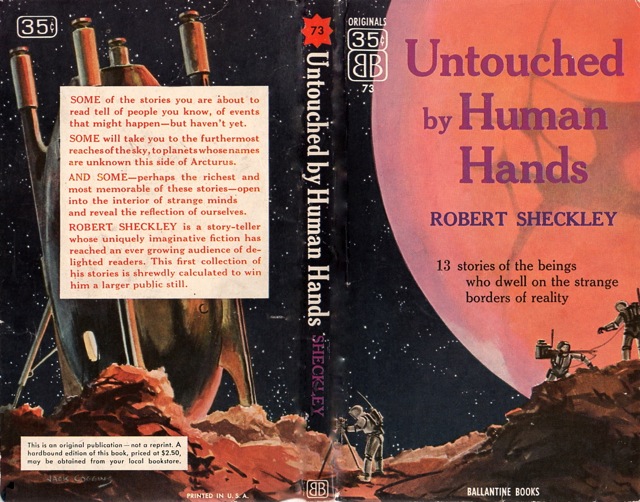 “Specialist” by Robert Sheckley — A photon storm strikes a spaceship without warning, killing one of their crew. In the ship, each crew member has a special function — Eye, Engine, Talker, Walls, etc. But without their Pusher, the ship is limited in its rate of travel. So they explore nearby systems hoping to find a planet of Pushers, no matter how primitive it may be.

There’s an excellent symbiosis of the alien characters within the ship. I wasn’t surprised that Earth was the planet of Pushers they find (I doubt most readers would be), but I think that by adding a human character, it helps to ground the story.

“A Gleeb for Earth” by Charles Shafhauser — A parallel world exists next to the physical one we know. The beings in that realm send one of their kind to inhabit a newborn baby, in hopes that as it develops, it will learn how to kill the entire human race.

The story is a series of letters from Glmpauszn to another being who crossed over ahead of him, updating him on his progress. It works well in this format. I couldn’t find any information on Charles Shafhauser. This may have been his only published story.

“Not for Children” by Evelyn E. Smith — An alien spacecraft lingers in the asteroid belt, drawing visitors from Earth. The craft appears as another asteroid, populated by the strange aliens. But the people from Earth are only interacting with alien children who play a game – pretending to be adults living in a primitive village on the asteroid. The pretend villagers exchange random junk for metal that they value and try to keep from laughing as they fool the Earthlings. Meanwhile, the adults are all below the surface, concerned with their own affairs.

It’s a lighter tale that made me smile at points. The alien children remind me of similar games of pretending I used to play with kids in my neighborhood. Except we didn’t have any Earthlings to fool, which is a shame.

“Junkyard” by Clifford D. Simak — A crew lands on a remote, nearly desolate planet, exploring the wreckage of an alien spacecraft. Well, parts of its engine at any rate; the rest of the craft appears to be missing. In the weeks spent trying to understand it, the crew doesn’t have any better understanding. Out of frustration, they decide to leave, but they can’t. For an unknown reason, they’ve lost the knowledge of how to operate their own engines.

This is my favorite story of the issue. It’s fun and doesn’t have any clear spoilers as to what the problem is. And it’s actually a unique problem — not something that became cliché over time. It also has an interesting resolution with dangling possibilities of events that could happen with the crew after the story ends.

Matthew Wuertz’s last retro review for us was the April 1953 issue of Galaxy.

I’ve never seen that issue, and the only story I remember is “Specialist”, which I think is very fine. (I read it along with more or less Sheckley’s complete works about 20 years ago in a sort of rush …)

I will have to track it down. The Gunn story looks like a case of great ambition meeting not yet sufficient ability, maybe.

Rich, it shouldn’t be too tough to find. Good luck!

Re the Gunn … it occurs to me, maybe a story Gold meddled with, too. Remember that he wanted Daniel Keyes to rewrite “Flowers for Algernon” to give it a happy ending.

I get the sense, based on an interview with one of the authors, that Gold tinkered with most of the stories he published.

Here is a list of what is wrong with “Wherever You May Be.”

This is fantasy, not science fiction. It should have been published in Beyond, not Galaxy. The quality of the story, however, is probably not up to Beyond standards, so maybe Imagination would have been a better fit. There is enough sexual tension and suggested pedophilia that it might have even been a good fit for the sleaze/horror pulps of the late 1930s (Mystery Tales, Uncanny Tales, Real Mystery).

Mr. Gunn makes a feeble attempt at including science fictional elements when Matt describes the equipment he uses to test Abbie, for a page or so. Nope, not buying it.

The writing is just a little more rigorous than a Dick and Jane book, and the occasional clunkiness really disrupts the flow of the story, such as the author’s tendency to end a sentence with an adjective or an adverb…awkwardly. Simple, straight-foreword writing is standard in fantasy in this era, but I would like some acknowledgment that I am an adult when I read anything.

The escape scenes near the end of the story, in the dance hall and the alley, are supposed to be comical, but they come off more like a silly cartoon.

Matt plays a horrific prank on Abbie after he learns that she can only use her power when she is angry. She gets an elongated revenge when she truly harnesses her god-like abilities, but everything ends well when she gets what she wants, which is to marry him. Even in the fifties it seems to me that female characters should have more dignity than to want to marry an egotistical jerk who treats her so poorly.

I really wanted to like this story, but I kept pleading with Abbie (in my mind, not aloud, I do have some pride) to cut Matt loose and move on.

“Specialist” stays true to the science fiction genre. Several self-aware components of a ship (Talker, Thinker, etc.) are conspiring to find a new Pusher, which would enable them to accelerate back to their home world. Somewhat predictably, they land on Earth and a human finally agrees to be the new Pusher, through a convenient hidden ability which is suddenly made workable in the last paragraph.

I enjoyed “Specialist,” even if it was a bit predictable.

Willy Ley gives another interesting and informed essay about the history of speculation on a potential space station.

The silliness continues with “A Gleeb for Earth.” There are some interesting ideas regarding mirrors, seances, and alternate worlds, but this story is hard to take seriously, with the made-up words, the romantic conquests (sort of), and the important role of alcohol as an ultimate solution.

Forgive me, but I loved “Not Fit for Children.” Young inhabitants of an asteroid take advantage of earth tourists by selling garbage in their invented primitive village, always wary of scientists who might bust them and break up their racket. The adult asteroid-dwellers live in underground caves, oblivious to what the youngsters are up to. I guess I finally gave in to the light and humorous tone of this issue. There is nothing really new or thoughtful in this story, but it enjoyed it nonetheless.

“Junkyard” is the winner this month. A planetary survey team discovers a puzzling array of artifacts and junk upon arrival at their assigned planet. When they finally figure out that their new locale is dangerous, they discover that they have forgotten how to start their rocket’s engines. What follows are an exploration of the planet and a thoughtful trial-and-error to solve the memory problem. The story leaves a few loose ends (do the memory-wiped crewman get to come back from their infant state?) but is a great read overall.

One of many reasons I enjoy reading the pulps and digests from the golden age of science fiction is discovering archaic idioms and phrases that don’t fit with current usage. Here is an exchange from a 1952 issue of Startling Stories that I will let speak for itself. I hope it gets past John’s censors:

“Blow,” he told her. Then, when she had complied, “It’s not that bad. Grab a robe and take a bath and you’ll feel better. I’ll go downstairs and see if I can’t find some books that will give us some information about this world we’re in. When you get through bathing, I’ll take one. Then let’s do some boning. And don’t worry-I’ll sleep on the couch. I planned to anyway.”

See you next month!

Hey, we agree on the best story in the issue!

I do wonder if “Wherever You May Be” would have worked better as fantasy, but because the premise was an extension of the mind, that was still seen as part of SF. I think it could have been tweaked just by having Matt keep his thesis on witchcraft and having Abbie be a witch. But then for goodness sake, give her more backbone! So frustrating of an ending. Keep in mind that she was 18, and Matt was I think in his early 20s, so it wasn’t much of an age gap.