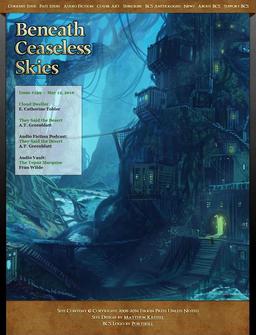 As it nears its landmark 200th issues, Beneath Ceaseless Skies has kicked off a subscription drive aimed at enabling the magazine to publish novellas for the first time (yeah!) The details are on the website, but here’s the basics.

From now until June 3, if you buy a BCS ebook subscription or renew your existing subscription (you can renew at any time), you can help unlock our drive goals. Since BCS #1 in 2008 – 200 issues, 419 stories! – over a third of our fiction has been novelette-length or longer. Longer stories work great for awe-inspiring fantasy worlds, like you’ll find in every issue of BCS. Our word-count limit for submissions, 10,000 words, has always been among the longest if not the longest of pro-rate online magazines. With your help, we’d like to make it even longer!

Every subscription makes a difference in helping us pay our authors, for their great stories of all lengths.

Beneath Ceaseless Skies is one of the top markets for adventure fantasy, and I’d be thrilled to see it start buying longer stories. At only $15.99 for a full year, it’s a terrific bargain. I bought my first subscription today, and I challenge Black Gate readers to follow my example. Let’s see if we can add 10 new subscriptions to the total.

“Cloud Dweller” by E. Catherine Tobler
Wherever he traveled, Vasily saw vast networks of lines — across the ground, stretching into the sky. It was the sky-bound lines that pulled at him most, that beckoned him to try his feet upon them. He had always strung ropes and wires to climb, between poles, trees, and buildings, but the lines that he had not strung — lines that existed of their own accord — were a challenge he never expected.

“They Said the Desert” by A.T. Greenblatt
“This isn’t your choice,” said Jade. “You’re dead.” She and Dominic glared at each other over the stale pond, as if they were arguing over a simple thing like dirty dishes, like they used to when Dominic was a man of flesh and blood. A pang of grief and longing welled up unexpectedly in Jade’s chest, but she pushed it down, away. Focused on keeping her pistol steady instead.

“Songdogs” by Ian McHugh
Agnieska swore, reaching for the hooks, determined to use them this time.

Firkin Press also sells a Kindle/e-Reader subscription, which includes automatic delivery to your Kindle or other device. A 12-month subscription comes with 26 issues and costs only $15.99. Single issues are available on Kindle and at Weightless Books for 99 cents. Subscribe here.

The magazine supports itself though subscriptions, and also by selling anthologies, including the annual Best of BCS volumes and occasional themed books such as the steampunk anthology Ceaseless West. The anthologies each contain 15-18 stories and cost only $2.99-$3.99.

This month’s cover, “Forest,” is by Geoffrey Icard. We last covered Beneath Ceaseless Skies with issue #198.

See our May Fantasy Magazine Rack here, and all of our recent Magazine coverage here.