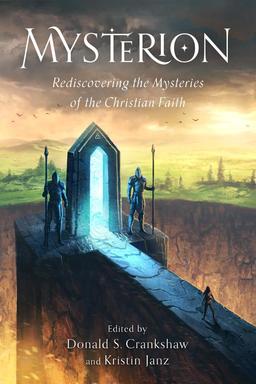 I’ve talked about the anthology my wife and I are editing and publishing before (see here and here). Mysterion: Rediscovering the Mysteries of the Christian Faith is a professional paying speculative fiction anthology of stories which engage with Christianity. It brings together twenty writers, both newcomers and established authors, including two Nebula nominees, in stories running the gamut from science fiction, to fantasy, to horror. We avoided preachy stories, instead looking for fiction with Christian characters, themes, or cosmology that deals with them in ways that feel authentic to our experience in the faith, neither sanitizing nor vilifying.

I haven’t had anything to say in the last few months, mostly because we’ve been busy — selecting the stories, editing the stories, getting contracts signed and paying authors. We’re still busy — right now we’re looking for well-known authors and editors to blurb the anthology, and preparing advance reader copies for them, and copy editing and formatting. It’s a ton of work, but we’re finally ready to make some announcements. Namely, our table of contents.

Here are the stories that will be appearing in our anthology.

“The Monastic” by Daniel Southwell
“When I Was Dead” by Stephen Case
“Forlorn” by Bret Carter
“Too Poor to Sin” by H. L. Fullerton
“Golgotha” by David Tallerman
“A Lack of Charity” by James Beamon
“Of Thine Impenetrable Spirit” by Robert B. Finegold, MD
“A Good Hoard” by Pauline J. Alama
“Yuri Gagarin Sees God” by J. S. Bangs
“Confinement” by Kenneth Schneyer
“The Angel Hunters” by Christian Leithart
“Cutio” by F. R. Michaels
“St. Roomba’s Gospel” by Rachael K. Jones
“Yuki and the Seven Oni” by S. Q. Eries
“A Recipe for Rain and Rainbows” by Beth Cato
“This Far Gethsemane” by G. Scott Huggins
“Ascension” by Laurel Amberdine
“Cracked Reflections” by Joanna Michal Hoyt
“The Physics of Faith” by Mike Barretta
“Horologium” by Sarah Ellen Rogers

We received over 450 submissions and chose 20 stories out of those, rejecting many that we both would have loved to include. It was a tough decision, but we’re really happy with all the selected stories, and we think this will be a great anthology.

We’ve begun putting up excerpts from the stories on the Mysterion webpage.

You can currently pre-order at a discount, and subscribe to our newsletter for up-to-date information.

I’m delighted to see Pauline J. Alama in your table of contents. She’s a wonderful writer, and a wonderful human being.

Congratulations on this anthology milestone, and good luck with the next.