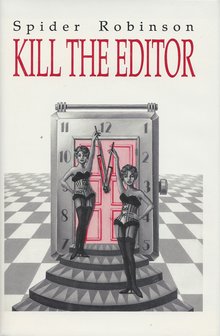 In my last post I talked about John D. MacDonald’s The Girl, the Gold Watch and Everything, and today I’d like to take a look at Spider Robinson’s homage to that classic story, Kill the Editor.

I should begin by telling you that Kill the Editor was published separately as a limited edition (1991) but also appears as the first two thirds of his longer Lady Slings the Booze (1992), which is in itself a follow-up (avoiding the dreaded “s” word) to Callahan’s Lady. In Lady Slings Robinson tips his hat to several other mystery/crime writers in his acknowledgements, but it’s MacDonald’s watch that interests me here.

As you’ll recall if you read my last post, Kirby Winter inherited a watch that would stop time for the person holding it. A ton of other people wanted to get his secret from him – most without knowing exactly what the secret was – and defending himself and defeating the bad guys constitutes the plot of that story. (Or the plot of pretty much any story, I suppose.)

Kirby is a good man, and one of the first things he does is realize the damage the watch could do in the wrong hands, and he does everything he can to prevent that from happening. But that’s exactly what Robinson shows us in Kill the Editor, the watch in the hands of a bad guy.

Joe Quigley, a private investigator with incredible instincts, and equally incredible bad luck, is hired to look into some strange goings on at Lady Sally’s House. Those of us familiar with the Callahan’s Bar Stories know that there is always something strange going on at the Lady’s, but usually she’s the one behind it.  Joe very quickly realizes that her current problems could only have been caused by someone who can “edit” time in the manner described by MacDonald in his novel. Hence the title. 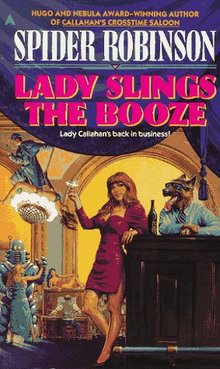 The watch itself has a few modifications from MacDonald’s original that make it harder to spot – it’s a wristwatch now, for example – but none that really effect how it functions.

Of course Joe does manage to nab the bad guy, figure out what really goes on at Lady Sally’s, and generally save the day. It’s a fun read, and the crime/mystery fans among us can definitely enjoy themselves figuring out the allusions to other works, and the appearance of other fictional (and occasionally real) characters. And of course, if you’re a fan of puns, you’re going to love any and all of Callahan’s series.

What I’m not so sure of, however, is how much you’d enjoy Kill the Editor if you weren’t already a Callahan’s fan.  It’s hard for me to be certain, of course, because I did come to the book with the full knowledge of the Callahan’s universe already in my head. I’m not sure how it would hold up if I were reading it without all that background.

I also have to say that Lady Slings isn’t the strongest entry in that universe.  For one thing, it’s hard to imagine that the crowd at the Lady’s – or at Callahan’s for that matter – couldn’t have figured out the problem and solved it without Joe Quigley’s help. I get the feeling that Quigley is such a fun character that Robinson needed a place to put him, and Lady Sally’s House was just too tempting to pass up.