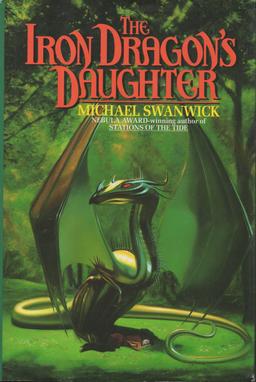 Ah, The Iron Dragon’s Daughter. John O’Neill asked me for a review a few weeks ago, and I thought, “Really? You want me to be objective when she and I are so very much in love?”

Because it is love, you know? And it burns hot enough to turn all negative comments to ash.

I’ve driven friends away with this obsession. “What do you see in The Iron Dragon’s Daughter?” they ask. “She’s so incoherent. She has practically no… no character.”

Yes, all right, all right. We’re talking about a book here. I knew that. Ink and paper, rather than flesh and bone. Born — apologies! — published in 1993. To some, like myself, it became a classic, but others greeted it with bewilderment and it has collected a slew (31%) of apathetic reviews on sites like Amazon.

The book has flaws, you see? It takes the type of liberties that would have most sane reviewers flinging stars away like wasps found on a beloved child.

“Why is the main character so bland?”

Both of these accusations ring true. Michael Swanwick’s story does have an arc that flows from the first page to the last, but rather than a rushing torrent, what we have here meanders across an exotic plain of wonders, leaving half-finished tales behind like so many oxbow lakes. 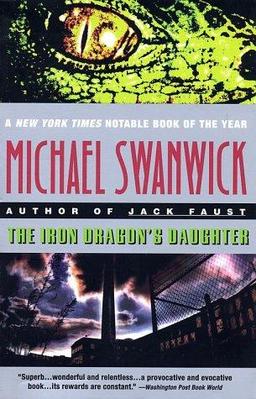 Jane, a human child, is stolen away to fairyland. There, in the company of other young creatures of varying shapes and magical abilities, she toils in a factory that builds bloodthirsty, sentient war machines.

Yes, yes, it’s a common story. We’ve heard it all before. But what often annoys people most is the episodic nature of the telling. Jane’s life, is recounted more as a series of novellas, each of which has its own beginning, middle and end, before, all too abruptly, we start the whole process over again.

And it’s not just the plot that fails to engage, is it? Jane herself isn’t exactly what you’d call a proactive heroine. Events and characters sweep her along, and it’s rare indeed that she takes control of the plot, or even her own life. This is not how fiction is supposed to be written, people. It’s a crime against the very concept of adventure and I feel dirty for having any part in promoting it.

You see, The Iron Dragon’s Daughter is a bit like sand: dry, bland-looking mush, until you put it under a microscope, at which point it… will… blow… your… mind. This is a book that’s more about the little stories than the big. Tragic ones, brutal ones, mindbending ones.

As you may have guessed, Swanwick’s Fairyland is a technoligically advanced Middle Earth, albeit with a science based on alchemy and sympathetic magic. Grinning, machine-gun toting elves pose for photographs amongst piles of dead goblin civilians. Death-worshipping Iron Dragons dive-bomb villages. New Shopping Malls are dedicated to the gods with willing human sacrifices. 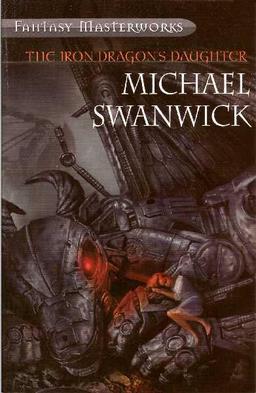 The book is a tissue of brilliant or deliciously wicked anecdotes, each of which deserves to live for itself, rather than to exist as a mere prop for a traditional story.

Some of these micro-plots are good enough to recount at parties, others, you’ll want to read out loud to friends over coffee, to perform them, even!

We have the story of the young couple who tried to deprive a god of his sacrifice. We learn the grisly details of gargoyle mating rituals, and also, the absurd lengths they go to in order to feed. We are taken on a tour of high elf amusements so depraved that I’m still not sure how a mere human imagination managed to invent them.

On every page is the porographic mating of magic and technology: the appalling or hilarious consequences of modernising Middle Earth. The Iron Dragon’s Daughter is an outrageous feat of creativity that shocks and tickles by turns with madness, sex and absurdity all squashed in together.

I urge you to read it. Or, if you were one of those who flung it across the room once upon a time, to reread it.

I’m the type who enjoys a great plot as well as the next person, I really am. But in the end, what’s great about any book, are the parts that stay with you forever: the moments and ideas that leave you changed when the rest has been forgotten. And that, my friends, is the true test of love.

Peadar O’Guilin’s last article for us was The Novels of Black Gate. His new novel The Call will be released by David Fickling Books on August 30, 2016.

And it’ll be out on Kindle at the end of the month!! Between this, the new James Stoddard book and the Kindle release of Katherine Kurtz’ Camber of Culdi trilogy, my dance card is getting awfully full …

Oh, thanks, Joe, I had no idea… Enjoy your dancing 🙂

Also, did you ever read the sequel (Dragons of Babel, I believe)?

Of course! I loved it. I got a hint from the author that there might soon be even a third 🙂

Excellent! I still haven’t read the second, but will have to do so after I reread the first.

I need to read more Swanwick. I’ve read a bunch of his short fiction and a Locus interview, and heard him on a bunch of convention panels. This book sounds like exactly my sort of thing.

And you were right about that sand photograph.

Yes, Sarah, the sand, holy moly! I hope you read The Iron Dragon’s Daughter and love it 🙂

There’s lots of great stuff from Swanwick. Oddly, I haven’t read THE IRON DRAGON’S DAUGHTER, but I have read — and loved — THE DRAGONS OF BABEL. Need to fix that first omission.

Babel is also pretty wonderful. The two books have a lot in common, but I remember Babel being funnier and Daughter being more horrifying…

Thank you for the way kewl, insightful review.

Thanks for the thanks, AWAbooks. I enjoyed writing it.

Love him or hate him, no one writes like Swanwick. The Iron Dragon’s Daughter is a book I’ll never forget.

CMR — you’ve summed up the entire review in two sentences! 🙂