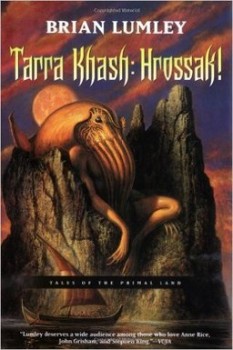 With Tarra Khash: Hrossak!, the British horror luminary Brian Lumley returns with six more stories of derring-do and magical skullduggery set in his primeval land, Theem’hdra. (Two years ago, I reviewed The House of Cthulhu, his first collection of swords & sorcery stories, here at Black Gate.) For those not familiar with the great island-continent, it’s another prehistoric land shoehorned into the Lovecraft Mythos timeline that includes Mu, Lemuria, Hyboria, Hyperborea, and several other forgotten places. It’s the sort of place endemic to tales of swords & sorcery, replete with strong-muscled heroes, conniving merchants, demon-haunted tombs, backstabbing villains, and dastardly wizards with faces hidden in deep cowls (all of which are found in this book).

Any moderately-read consumer of S&S will have experienced these elements, if not to the point of boredom, at least a whole bunch. To get away with the use of such hoary elements, an author must use them without a bit of irony, and with brio. Lumley does exactly that.

Lumley told Robert M. Price that his inspiration for The House of Cthulhu was the work of Clark Ashton Smith and Lord Dunsany, and it’s a claim only bolstered by the tales in this collection. While his prose is never as ornate or bejewelled as his models, there is a similar love for exotic, haunted landscapes draped in mystery and populated by ancient deities and uncanny magic. 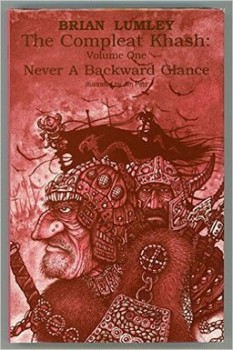 The first part of the title refers to its hero, Tarra Khash, and the second to his tribe of origin, the bold, steppe-dwelling Hrossak. All the stories feature the resourceful adventurer, Tarra Khash. Taken together, they catalogue his exploits as he makes his way eastward across some of the wildest and uncharted regions of Theem’hdra. Four of the stories were initially published in magazines, while two first appeared in the earlier version of this book, which was called The Compleat Khash, Vol. 1: Never a Backward Glance.

When we first meet Tarra Khash, in “Treasure of the Scarlet Scorpion,” he is in a convent being nursed back to health following a journey through the “tropical forests east of Thinhla.” He had gone in search of wealth and adventures, which he found:

“lost amid the creeper-cursed and vine-entwined ruins of an ancient city — where orchids took root in crumbling courtyards and shifty-eyed chameleons swayed atop the slumping piles of primal ziggurats — there lay the toppled temple of Ahorra Izz, the scorpion-god, whose stone steps went down to caverns of forbidden treasure beyond all the dreams of human avarice.”

Unfortunately, clever as he can be when his back is up against a wall, Tarra isn’t always the best judge of character and he gets tricked and imprisoned by the gem dealer, Nud Annoxin. Trapped at the bottom of a pit in the bowels of the merchant’s mansion, his only hope for escape is to tell his captor how he reached Ahorra Izz’s temple and survived to escape with pockets full of rubies.

In “Isles of the Suhm-yi,” Tarra throws in with a pair of gold prospectors. The trio are successful but fall prey to a gang of bandits who kill Tarra’s comrades and leave him for dead. Surviving, he tracks them to the Circle Sea and the islands of the legendary Suhm-yi people. Before the tale’s end, a drowsy god is awakened and strange magics are summoned under the light of a brightly glowing moon.

It’s in this story that Tarra begins to take on some characteristics that help distinguish him from the host of other fortune-hunting S&S heroes. Finding a Suhm-yi woman ravaged and murdered, Tarra is outright tender in his care for her remains and their burial. Over the rest of the stories, Tarra is shown several times to be a man possessed of a good nature and generally ready to help those in need. It’s nice to come across an actual hero in heroic fantasy sometimes. 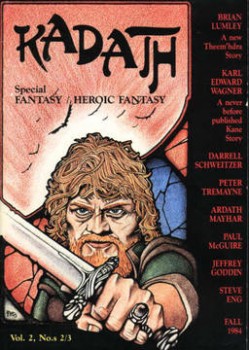 Tarra suffers no setbacks in “Told in the Desert.” Instead it’s another’s story of marital devotion and vengeance. “Lost, hungry, and athirst,” Tarra is surprised to find a tent, inhabited by a man and a woman, in the middle of a ruined city in the middle of the great Nameless Desert. In return for telling them the story of his adventures, Tarra asks for a story from his hosts. The man complies, with an admonition:

“You would have a story?” his host smiled a slow sad smile, and nodded. “I know of that custom. Very well — but understand, it is merely a story, a fable, a trivial thing. Your tale was a chronicle of your life, your adventures. A tale of blood and swords, of monstrous men and beasts. A wild, surging, passionate thing. Mine will be a tale of lovers parted and sorrow turned to red revenge. By comparison, a sad thing.”

The tale he tells is of a court wizard sent out by his lord on a doomed quest, separated from his wife and home for many months. When the wizard returns he finds that his lord’s folly has brought ruin on everyone.

“Told in the Desert” is the most Dunsanian story in the book, having a dreamy, almost fairy tale tone. Lost in a distant jungle on his quest, the wizard summons up the shades of his ancestors and each visits him, unable to help in the moment, but presenting him with a gift to help in the future. The story features a magic carpet, dooms and portents, and ancient tomes, depicted more baroquely than any of the other stories, and it all works quite well.

“Curse of the Golden Guardians” returns the focus to Tarra. Finally reaching the end of the Nameless Desert, he finds a forest waterhole and Hadj Dyzm, the sole survivor of a caravan attacked by mountain barbarians. At least that’s what he tells Tarra.

As Tarra regains his strength, Dyzm reveals bits and pieces of his story that allude to him being more than a simple merchant. Eventually he tells Tarra that the real reason he is at the waterhole, far from any civilized town, is that a great tomb lies hidden in the hillside above them and in it is treasure beyond anyone’s wildest imaginings. And, he asks, would Tarra be up to helping him recover as much as possible? Things, rest assured, do not go well for Tarra, who again finds himself imprisoned at the bottom of a pit before the story’s end.

“Tharquest and the Lamia Orbiquita,” a story from The House of Cthulhu, introduced us to the titular demon (lamia) Orbiquita, and the thief-ruled city, Chlangi. Both are featured in this volume’s “Kiss of the Lamia.” 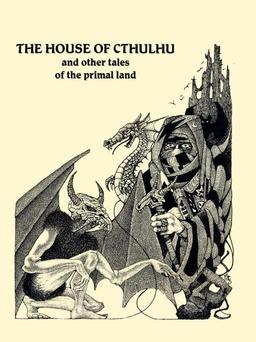 Tarra is again robbed and left for dead, this time with an arrow in his back. Surviving once again, he also rescues a priestess attacked by the same bandits and left staked to be burned by the sun. She turns out to be Orbiquita, caught by the bandits when she was in a weakened state. While her natural inclination is to kill any man after she’s slaked her various thirsts on him, she is touched by his actions and leaves him alive and free. They will meet again atop the crumbling walls of the vile Chlangi where both are poised for revenge against the bandits and those who support them.

The book’s finale, “In the Temple of Terror,” connects the last story to the first. Having finally reached the prosperous city of Klühn, with gold in his pockets and no ill omens hanging over his head, Tarra settles in to spend some of his wealth in as fine a fashion as he can. Unfortunately, while he manages with no problems for three days, he then wanders drunkenly into a gambling den. Eyes clouded by drink, he fails to see that all the dice are loaded and all the cards are marked.

When he learns he was rooked he returns with a plan to get back his wealth, only to run up against the true power in Klühn, the yellow-robed priests of the Secret God. Recent immigrants to the city, they have managed to bring all the underworld under their thumb. Condemned by false testimony, Tarra finds himself sentenced to death and hanging in a cage suspended high over the city square. In the pages that follow, there is the reappearance of a friend from an earlier story, a daring rescue, and cosmic horrors with lots of gore and ichor splattered all over the place. In other words, good stuff like this:

Beneath the circling swords, down on the dais where Gorgos’ body throbbed and convulsed in the blue-green tube of eerie lightnings, a monstrous transformation was taking place. The magician’s rune-covered robe bulged, splitting under the pressure from within, flying into tatters; beneath it he was huge, black, bloating larger still, but worst of all —

— Amyr had been right: Gorgos was never born of good clean earth — nor of any sane world or place or time! His voluminous yellow robe had hidden well the many groping tentacles and appendages and pustules with which, from neck to loins, his nightmare body was covered like a living mat! 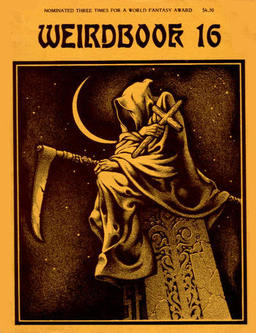 If that’s in any way appealing, Tarra Khash: Hrossak!, slightly ridiculous title aside, is for you. I’ve written before that I read S&S for fun. Even at his most existential, Robert E. Howard’s stories work because they tell rollicking good tales of adventure. At his gloomiest, Karl Edward Wagner told a good story. Same thing with Michael Moorcock.

When I want a sip of adventure, an unloosening of the ties to the mundane world of parking tickets, problems with contractors, and work schedules, the sorts of stories Brian Lumley has wrought in this book and its predecessor are exactly the draught I’m in need of. If you pick up this book, before long, the scents of exotic forests, the dull clink of gold coins, the swish of a quickly drawn sword, and the crackle of sorcery as it creases the night sky will become your reality.

There’s one more volume of Theem’hdra, Sorcery in Shad, telling how Tarra Khash makes his way back west toward the Circle Sea and home. I’ve just bought it.

All 3 of Lumley’s Primal Lands volumes were collected in a single omnibus by Subterranean Press last year as Tales From the Primal Land. It’s available directly from Subterranean or on Amazon.

I’ve always been curious about Lumley’s relationship to Ganley – was the latter a super fan? If I collected, I would want the Ganley produced Lumley books especially because of their low-fi look.

I assume it was a combination of Ganley being a fan and of Lumley not being able to place those particular books with an American mass market publisher?

Typeface quibbles aside, they really were nice — I think Steven Fabian did most or all of the illustrations? Sadly, my copies were lost in the flood in 1993. Sigh.

He did the recent revival issue of Weirdbook (which I had forgotten or hadn’t realized it was him) and I think might have another on the way?

@JoeH – investigating over at ISFDB, I learned Fabian only did a few of the Ganley covers. The rest were done by several other artists, Judith Holman and David Carson among others. I’m going to put all the Ganley covers up over at my site later today, just because they look cool and are such a contrast to the terrible photoshop covers “gracing” so many fantasy books today.

@rjmiller – If I bought real books, Tales of the Primal Land with its lush Bob Eggleton cover would be a cinch.

Yay, Brian Lumley. Black Gate, no the world, needs more Brian Lumley. Thanks for reminding me of these FV. I already have the first book, but I’m a little remiss on the second and third.