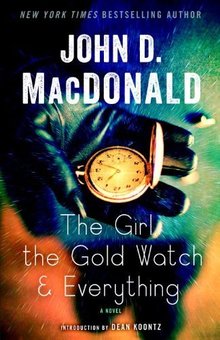 John D. MacDonald is one of my favourite crime writers, and he’s probably best known for his Travis McGee series, starting with The Deep Blue Goodbye (1964) and ending with The Lonely Silver Rain (1985). Others, such as Glen Cook,  have used this device after him, but I’m fairly certain that MacDonald’s the first person who identified individual books in his series by giving each one a title colour.

While John D. is well worth looking into for any of his genre or non-genre novels, I’d like to draw your attention in particular to his only SF contribution, The Girl, the Gold Watch, and Everything.

In this story a mild-mannered young man, Kirby Winter, inherits from his uncle a watch that will stop time for everyone except the person holding it. Of course Uncle Omar used the watch to make himself rich, but he also did a lot of good. He tried to keep as low a profile as possible, but unscrupulous types figured out he had something that gave him a edge in the money world, and now they’re after Kirby to get whatever it is for themselves. That’s the essential problem and conflict of the novel, and with the help of Bonnie Lee Beaumont, a young woman who happens to be a good deal quicker off the mark and savvy about the world than Kirby is, the problem gets solved. 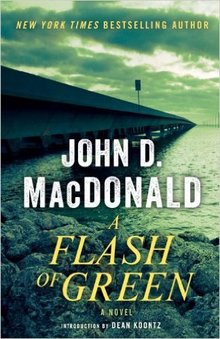 This novel is a long slow burn by Fantasy and SF standards – the time-controlling watch of the title doesn’t even start being used until half way along. So much is happening, however, that you don’t really notice. And we are given a prologue that sets us up beautifully for the upcoming watch-related hijinks.

MacDonald is a master at detailing social/political situations, particularly when it comes to politics between the sexes. Unfortunately, the very details that anchor a book in its place and time, can be the things which date it. It’s exactly these situations that the modern reader feels have changed the most – even when they haven’t.

What about the sexual politics? I’d say that if MacDonald isn’t an out and out feminist – something difficult to be sure of since we’d have to look over quite a span of years in which he was writing – he’d have to be considered a proto-feminist. He rarely used women as point of view characters, but all of the women in his books, even the unpleasant ones, are strongly drawn, fully three-dimensional people. In The Girl, etc., as I’ve indicated, even though Kirby is the pov character, it’s Bonnie Lee who saves the day with her grit and ingenuity, with Kirby following her lead and example. MacDonald’s women may occasionally be “girly” by today’s standards, but they’re never weak, and if occasionally they’re idiots, well, sometimes people are idiots. 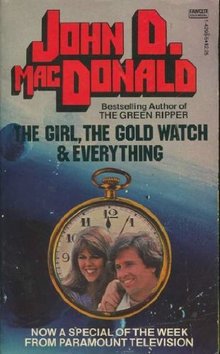 MacDonald also had a significant non-genre opus with books like One More Sunday, Condominium, and Flash of Green, many of which were made into films, like Cape Fear.

The Girl etc. was also made into a TV movie in 1980, starring Robert Hayes and Pam Dawber. I haven’t had any luck tracking it down, but I’d love to see it, if only to judge for myself how well the actors did with the roles.

MacDonald didn’t write any other SF or speculative fiction – to my knowledge – but his watch does turn up again. I’ll talk about that next time.

I’d like to end by saying that MacDonald is one of my favourite crime writers, and Travis McGee has to be in my top three favourite 20th-century characters, along with Archie Goodwin, and Spenser. Even the more dated books are saved by great writing and tight plotting.

MacDonald wrote a lot of SF, much of it very good. Look around. It’s easy to find.

McDonald was a regular contributor to the SF magazines early in his career (late ’40s/early ’50s). From that time period come two other SF novels: WINE OF THE DREAMERS and BALLROOM OF THE SKIES. (The first originally appeared in STARTLING STORIES, one of his major markets.)

He did some very good stuff at that time — check out short stories like “Spectator Sport” and “Game for Blondes”.

Thanks for this review — I confess I still haven’t read THE GIRL, THE GOLD WATCH, AND EVERYTHING, though I’ve had a copy for decades — I really need to rectify that!

I see Bill got there first!

Glad you mentioned “Spectator Sport,” Rich. I read that one in one of those big Groff Conklin anthologies, and it was the first JDM story I ever read. I still remember it after all these years. I’ve read a good bit of MacDonald’s SF, and I think he’d have been right up there with Heinlein if his crime fiction hadn’t taken him out of the field.

This one was always too screwy for me – and I love John MacD! I’m trying to remember watching the sequel movie (which MacDonald had nothing to do with) and I can’t recall a single thing.

I don’t think his regular science fiction has aged particularly well, but the collection ‘Other Times, Other Worlds’ is worth a read.

‘Ballroom of the Skies’ is a somewhat thought-provoking novel.

The first McGee novel is THE LONG BLUE GOOD-BYE, not Quick Red Fox.

Thanks everyone for letting me know about MacDonald’s other SF. I did find mention of some of the books you refer to here, but it wasn’t clear to me whether they were SF. Obviously I’m looking in the wrong places. Thanks again.

I should also mention that I edited the post to show that The Deep Blue Goodbye was the first Travis McGee novel, not the Quick Red Fox. There are three novels with a copyright date of 1964, and I’m indebted to Richard Marvin for letting me know which was actually first.