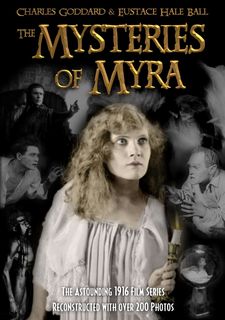 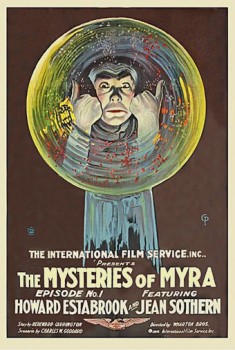 Most people have never heard of The Mysteries of Myra, much less seen the surviving footage. This 1916 silent serial was produced by publishing magnate William Randolph Hearst and directed by The Wharton Brothers for The Whartons Studio in Ithaca, New York. As late as the early talkie era, New York was still a rival for Hollywood with Paramount Pictures based on the East Coast until the early 1930s. The Mysteries of Myra was intended to carry on the tradition of The Perils of Pauline and The Exploits of Elaine, it was the work of the same screenwriter of those two lucrative serials, Charles Goddard, but The Mysteries of Myra was very different from any serial before or since in terms of structure and content.

Charles Goddard’s 15 chapter screenplay was developed from an original story treatment by real life occult detective, Hereward Carrington. Dr. Carrington was a member of the infamous Society for Psychical Research and a colleague of Harry Houdini. While a skeptic who exposed many false claims of psychic phenomena and hauntings, Dr. Carrington was also a believer in demonic possession, the afterlife, and other preternatural occurrences. The hero of the piece, Dr. Payson Alden, occult detective is clearly based on Hereward Carrington. The Mysteries of Myra is concerned with Dr. Alden’s efforts to save heiress Myra Maynard from the occult society, The Black Order and to win her heart from her contemptible fiancé , Arthur Varney, who is the right hand man of The Grand Master of The Black Order. 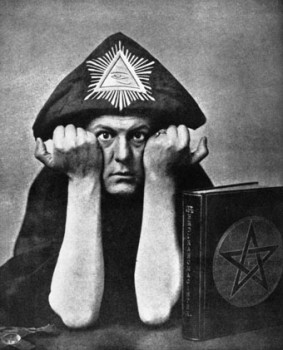 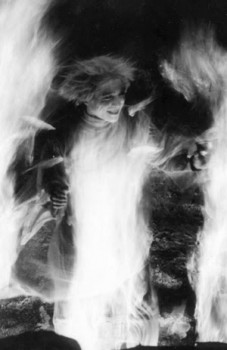 The unnamed Grand Master of The Black Order is, of course based on the infamous Aleister Crowley. While many works used “the wickedest man in the world” as the model of villainy, the Whartons went one step further and hired Crowley as a consultant on the serial to ensure authentic depictions of occult ceremonial rituals and to act as a counterpoint to Hereward Carrington’s views on magick. There is no denying that The Black Order in The Mysteries of Myra are a far cry from the cartoonish depictions of occultists found in serials such as The Trail of the Octopus (1919).

Over the course of fifteen chapters, audiences thrilled to see the virginal Myra Maynard just barely cheat the unspeakable fate her late father (an occultist who fled The Black Order) unknowingly bequeathed her. Along the way, viewers thrilled to see hypnotism, astral projection, gender/body swapping, telekinesis, thought projection, séances, automatic writing, and more brought to vivid life. The menacing Black Order displayed the Sign of the Horned King and conjured a succubus and incubus, a fire elemental, and a demon in their determination to sacrifice the innocent Myra Maynard and thwart their rival, Dr. Payson Alden once and for all.

Sadly, only a few chapters and incomplete footage from this vintage serial survived a fire at the Whartons Studio in 1929. William Randolph Hearst allegedly withheld profits from the Wharton Brothers on the pictures he produced for them and drove them to the point of bankruptcy. Today, very few people are aware of this once important filmmaking center in the United States or have heard of this highly influential and notorious serial. Such was its importance, one of the many uncredited Nick Carter authors, Eustace Hale Ball adapted each chapter of the serial for newspaper syndication. It was finally collected in book form in 2010 by Eric Stedman of The Serial Squadron in a massive 400 page volume which published hundreds of rare photos from this lost serial for the first time. Stedman also released a companion DVD of the surviving footage. Footage can be seen on YouTube or at The Serial Squadron website, http://www.serialsquadron.com/dvds/mysteriesofmyra/ where both book and DVD may be ordered.

Truth is stranger than fiction. William Patrick Maynard, who claims to be a relative of one John Maynard, a former resident of Ithaca, New York whose father also worked for William Randolph Hearst and may or may not have been the real life counterpart of  Myra Maynard, is the authorized continuation writer for the Estate of Sax Rohmer. His third Fu Manchu thriller, The Triumph of Fu Manchu will be published by Black Coat Press later this year.

I live in Ithaca. Not only do we have a Wharton silent movie museum, but the mayor proclaimed October as Silent Movie Month. I have seen one Wharton movie; it was set in the Alaska gold rush, featured the plucky heroine braving a blizzard to save her father, and was filmed using genuine New York snow instead of the all-too-fake-looking white fluff that Southern California studios used. “The Mysteries of Myra” sounds like quite the wildest thing they ever made.