March has come and gone and now it’s time for the short story roundup. It was a nice month for short swords & sorcery storytelling. Not a spectacular month, but a nice one.

I’ll start with Curtis Ellet’s Swords and Sorcery Magazine, Issue #50. Now in its fifth year, SSM, like most low-paying publications, is a hit-or-miss proposition for readers. Both of #50’s stories are hits.

“The Altar of the Toad” by Davide Mana is a simple and solid story with just enough characterization, world building, and action to serve as a perfect example of the minimum of what I want from the genre. I don’t need every S&S story to be a staggeringly brilliant literary achievement, only for it to take me away from the blacktop and the sounds of honking horns for a little while.

Aculeo, an ex-legionary, and Amunet, an Egyptian sorceress, make a tremendous mistake when they respond to a plea for help from a blind woman:

“I prayed for delivery,” she said, her head tilted to one side. A strand of stringy hair had come loose from her coif, and brushed her wrinkled cheek as she spoke. “I prayed for warriors, to deliver my daughter from the mouth of the Toad.”

In this genre that sort of request is bound to bring trouble. It does, and with more than a hint of Lovecraft Mythos terrors. Even though there are plenty of intimations that “Altar” is part of a larger narrative, it stands perfectly well on its own, something I prize highly. Mana has self-published several other stories of Aculeo and Amunet and I am very curious how they stack up against this one.

In Andrew Muff’s “Old Bones,” a pair of old hunters search for the titular demon come down to plague their town, killing chickens and pigs with abandon. While some of their fellow villagers balk at the hunters’ ages, they alone have experience with such a monstrosity, having dispatched another one fifteen years prior:

All those years ago we ventured into the forest and successfully returned with the Toe-Eater’s head…that blighted hill demon who nightly burrowed into our family graves in search of food, who supped on stray cats and blind, old hounds, and who—on a bleak December night—snatched the newborn daughter of my neighbor from her cradle and boiled her in a small, iron stewpot.

As the hunt lengthens and they near their quarry, the trackers find that their foe is much more dangerous and clever than anticipated. At around the same time the story heads off in an unexpected, and thoroughly satisfying, dark direction.

Grimdark Magazine Issue 7 hit the virtual newsstand with its usual mix of new stories, reprints, novel excerpts, reviews, and interviews. As someone who doesn’t read all that many new fantasy novels, the last three features are great for hipping me to some of the more interesting things going on in the genre.

My favorite story in GDM 7 is Django Wexler’s “The Penitent Damned.” Previously published in io9, it’s a prequel to the novel The Thousand Names, which was written about right here at Black Gate by John O’Neill several years ago. It’s set in a world of muskets and magic, something we’ve seen a lot of in recent years. The story presents us with a world of secret police services, thieves armed with deadly magic, and priests willingly bound to demons in order to fight heretics. All pretty standard grimdark fare, but delivered with bite and verve that keeps it from feeling commonplace.

While the story opens with the introduction of a secret police officer even his boss is disturbed by, the protagonist of the story is the thief Alex. She and her mentor, Metzing, lured by the promise of an unbelievable payoff, take on a job to steal something from right under the noses of the secret police. Even armed with sorcery, the heist proves far more than she bargained for.

Alex slid sideways, putting the bulk of his body between herself and the other guards. Darkness slid out of her palm, hardening into sickle-like blade as she brought her arm up. The supernatural weapon took the black-coat’s arm off just in front of the elbow, slicing through coat, flesh, and bone with equal ease, and the hand still gripping the pistol fell away. 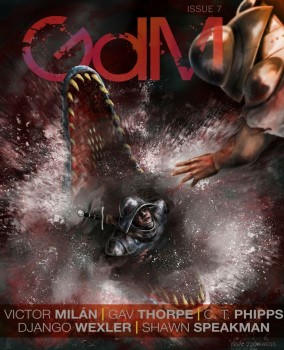 This is exciting stuff that has definitely piqued my interest in Wexler’s longer work.

“The Kid” by Rob J. Hayes is an excerpt from his collection The Bound Folio. Set in the First Earth setting of his Ties That Bind trilogy, it’s more a mood piece than a full story. The titular Kid is the smallest, least important member of a band of orphans surviving on the mean streets of Korral, a city like a thousand other extremely crappy cities in swords & sorcery. Nothing really happens and life still sucks for the Kid at the story’s end.

“The Nu-Thai Screwjob” by Gav Thorpe is a sci-fi heist story. It’s a nasty work centered around sexual exploitation and some pretty heinous blackmail. It was not to my taste.

The concluding story is another tale set in world of Victor Milán’s novel, The Dinosaur Lords. “Red Seas, Red Sails” gives readers savage pirates, brave knights, and of course, a dinosaur. Specifically, a Pliosaurus funkei, a huge aquatic beast that GMD‘s editors knew would make a great cover picture. While the story feels like it’s taken from a longer work, and I felt like I needed to know more about the characters than the story provided, like Milán’s previous outing in GDM, a novel excerpt in Issue 3, this one is brutal and bloody and more than sufficiently exciting. When you think about it, how can you go wrong with dinosaurs, pirates, and knights?

Well, that’s all I’ve got for the regular roundup this month. However, there’s been an explosion of new short fiction these past few months. Next week I’ll bring you a look at the first issue of Cirsova Magazine and the latest Pulp Literature.