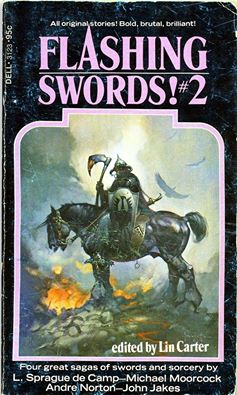 Being an avid Black Gate reader, you know that we devoted a lot of attention to the various works of Conan’s creator last year with our ‘Discovering Robert E. Howard’ series. I was very much a latecomer to Conan, as well as Howard in general. I’ve made up a lot of ground on Solomon Kane, El Borak and others, but I’ve still got a slew of Tor paperbacks featuring the Cimmerian that I haven’t read yet, among other stuff.

However, one fantasy series that I delved far deeper into at a much younger age was Michael Moorcock’s saga of Elric and the Eternal Champion. To my middle school, Dungeons and Dragons-playing mind, that stuff, with those awesome DAW covers, was pure gold. In fact, White Wolf would have been FAR better served to use one of those instead of the craptacular cover they put on Elric: The Stealer of Souls in 1998. It is beyond awful and I’m not going to include it in this post. You can Google it if you doubt me, but I’d take my word for it.

I was going through some boxes of books that aren’t on my shelves and I came across the Dell paperback of Lin Carter’s Flashing Swords #2. First published in hardback in 1974, it included a new story of the pale Melnibonian, “The Jade Man’s Eyes.” And with a Frank Frazetta cover, it’s miles ahead of the aforementioned White Wolf cover as well.

This collection has an interesting introduction that talks about Howard’s Conan as the birth of sword and sorcery (remember: forty-plus years ago and pre-internet, what we now regard as common knowledge and what’s popular and respected often wasn’t the case then).

Carter tells of the creation of The Swordsmen and Sorceror’s Guild of America, Ltd. (SAGA), including himself, L. Sprague de Camp and John Jakes. Fritz Lieber, Mike Moorcock and Jack Vance were added soon after, followed by Poul Anderson and Andre Norton. I imagine you’ll see a SAGA post here somewhere down the line.

START OF SPOILER WARNING – I’ve made similar pronouncements regarding some of my Holmes posts: I’m talking about stuff that was written, in this case, over forty years ago. And there have been multiple printings. You’ve had your chances to discover what you might read below. – END OF SPOILER WARNING

In the actual introduction to “Jade Man,” Carter writes,

In 1965 followed an Elric novel called Stormbringer, wherein Moorcock made the tactical error of killing off his hero and terminating the series by the simple method of blowing up the universe. Since then Mike has created many another fantasy hero, but he has recently confessed to me that he is tired of making up carbon copies of Elric: hence this story, and the good news that he is back at work, fitting new Elric tales in among the ones written almost a decade earlier…

…Moorcock wrote me about his new Elrics: “I decided that rather than try to invent another character like him, I might just as well keep writing about him.” 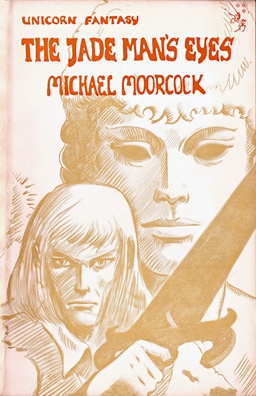 Moorcock dropped this story in between “The Singing Citadel” and “The Stealer of Souls.” Elric had already torn down Imrryr and more specifically, disposed of that pesky Theleb K’aarna. Elric and the erstwhile Moonglum wander into the city of Chalal, short of funds.

They are aided by Duke Avan Astran, who wants Elric’s aide on a quest to R’lin K’ren A’a, a lost city where Melnibonians were rumored to come from. It was a meeting place of the gods and had a giant jade statue with two magical jewels for eyes. He wants those jewels. Elric agrees to aid him and they eventually reach the ruins of the city and find both statue and the jeweled eyes. Of course, there are nearly insurmountable problems, including native creatures almost impervious to Stormbringer.

Astran becomes yet another “ally” who discovers, for a very brief time, that trusting Elric is hazardous to your health and we even get a visit from a more disgruntled than normal Arioch. Moorock gives us an interesting twist regarding ‘The Creature Doomed to Live’ and the story comes to its conclusion.

It won the 1974 British Fantasy Award for best short story.

Carter clearly claims this story is new in Flashing Swords #2. Moorock reportedly said he couldn’t recall exactly when it was written and it might have been done for Ken Bullmer’s aborted Sword and Sorcery magazine (which never made it to print). That’s possible, though he may have been thinking of The Sleeping Sorceress, which was to be serialized in Sword and Sorcery but did appear as a novella a few years before “Jade Man.”

There’s no denying the story appeared in 1973 as a chapbook for Unicorn Bookshop owner Bill Butler for his fledgling small press (a ‘thing’ in those pre-self/e-publishing days). I’ve seen the Unicorn version credited as the first printing of the story, so I’ll cast my vote for it. 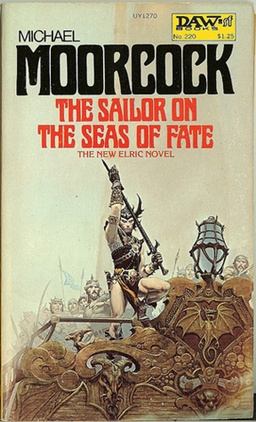 As Moorcock continued fashioning new stories and inserting them into his Elric history, he rewrote some of what went before. He certainly did so with “The Jade Man’s Eyes.” Retitled “Sailing to the Past,” it appeared in 1976’ The Sailor on the Seas of Fate. Elric was still a Prince of Melnibone – he hadn’t brought down the house yet. And Moonglum is absent, replaced by Count Smiorgian. This story immediately precedes Elric’s sack of Imrryr. I guess Smiorgian can be thankful that he avoided slaking Stormbringer’s thirst in the story, though his ending is no happier than any other man who trusts Elric.

Flashing Swords was Carter’s idea and featured new stories from authors in SAGA (which reminds me a bit of Christopher Morley and the Algonquin Round Table: but a working version). It had its roots in earlier anthologies such as Swords and Sorcery and The Spell of Seven (edited by de Camp) and Swords Against Tomorrow (edited by Robert Hoskins).

There were five Swords anthologies between 1973 and 1981, featuring twenty-three new stories (well, one Elric story was part of a novel published the prior year in England…And I mentioned the Unicorn chapbook of “Jade Man.” Oh, forget it). Carter was the driving force behind the whole informal SAGA thing and it fell apart as his health declined, leading to his death from oral cancer in 1988.

I like Elric. Let me rephrase that: I like reading stories about Elric. Elric himself is more or less as likable as Stephen R. Donaldson’s Thomas Covenant. Throughout the saga, allying oneself with Elric is about as productive as opening THAT door at the end of the hall in a horror movie.

I’ve read the saga at least twice, though I forced myself to endure The Dream Thief’s Daughter and The Skrayling Tree. And they were so enjoyable that I never bothered with The White Wolf’s Son. Frankly, I could live without Fortress of the Pearl and Revenge of the Rose, for that matter. But the earlier stuff, as well as the first three Corum books, is classic sword and sorcery. “The Jade Man’s Eyes” is typical Elric, with bizarre enemies, a call for supernatural aid, Stormbringer having his way and Elric, spiritually and emotionally even more weighted down, weathering it all. And for me, that’s more than good enough.

There has been plenty of Conan in movies, tv, cartoons, games and RPGs. But Elric has been noticeably absent from all of those except for RPGs – and even then, the market seems under developed. It sure seems like the property could be better utilized.

His “The Adventure of the Parson’s Son” is included in the largest collection of new Sherlock Holmes stories ever published. Suprisingly, they even let him back in for Volume IV!

Always love your posts, but this one was really exceptional. I too am a HUGE Elric fan. Ever since the earliest edition of TSR’s Deities and Demigods when I first saw artist Jeff Dee’s renditions of the “Melnibonean Mythos”, I knew I had to track down these Elric books and read them.

Your post really highlights how these old paperbacks of Carter’s are real gems in multiple ways. Not only are there (usually) good stories within, the introductions are historical time capsules that let you in on various tidbits. Carter has gotten his share of criticism over the years but his editorial work and introductions are almost priceless for those of us who are interested in such things.

Very interesting post that dragged me in. I discovered Howard as a teen, and more or less missed Moorcock…I should correct that.

James – I too had that edition of Deities – before TSR had to remove the Moorcock and Cthulhu entries.

I pulled this pb out by mistake a few months ago: I was looking for the ‘Year’s Best’ in which Carter just savaged Sword of Shannara. For some reason I decided to read Jade Man, found some of the backstory, got out my White Wolf Edition, and decided I had a post to write.

I’d like to write more on Elric, Corum and The War Hound All the World’s Pain if I could do some re-reading.

Somewhere in my notebook of story ideas is a pairing of Elric (Chaos) and Sherlock Holmes (Law) on a quest to save Moonglum.

We had reverse experiences there, eh? I was reading Tolkien, Lieber, Donaldson, Kurtz, Moorcock, then Eddings..but never got into Howard for some reason.

I did the same thing in the mystery field, not discovering Nero Wolfe until my thirties. Now, I like him even more than Holmes and Solar Pons.

Oh, I didn’t think the White Wolf covers were _that_ bad …

Coincidentally, I think I read both Elric and Thomas Covenant right around the same time — at that point, I was borrowing the Elric (DAW paperbacks with Whelan covers) from a friend; when I bought my own paperbacks, they were the Berkley editions with the Robert Gould covers.

At the time I had no idea that they hadn’t been written in chronological order; I just read the one with a big 1 on the cover, then the one with a 2, etc. (OK, no literal 1s or 2s.) Then it was interesting to pick up Flashing Swords and discover that not only had he written things out of order, but some stories had even been reworked to fit into different places in the sequence.

Joe – I don’t mind Song of the Black Sword, but that other cover: looks like a terrible piece of modern art!

I read the DAW paperbacks, so that’s what I knew of Elric for quite a few years. I didn’t realize he’d done so much rewriting and organizing, either.

I think I have one of the Gould’s, which I don’t mind.

I should probably dig out my copy of that Elric anthology, ‘Tales of the White Wolf.’ I vaguely remember a couple good stories in that one.

“I was looking for the ‘Year’s Best’ in which Carter just savaged Sword of Shannara.” Please mention which volume that was in if you find it; I’d love to read that myself. And as usual, thanks for a very informative post!

Hi Jeffrey – It was this one below. I just can’t figure out which box I put it in. And moving some of these boxes is a pain. But Carter just absolutely shredded it in a short rant. It was maybe two paragraphs. But it drips venom. I’ll find it yet!