Back in January I bought a nice lot of 42 vintage science fiction paperbacks on eBay. Most were from the 70s and 80s, and most were in pretty good shape. Enough to keep me busy for a month, taking them out of the box one by one and cooing over them.

Most of you are probably too young to remember that far back, when the Cold War was at its height and the specter of nuclear war loomed over everything. In November 1981 Gallup found that 53% of American adults expected a nuclear war within a decade, and after Nicholas Meyer’s apocalyptic TV film The Day After and NBC’s tense mock-documentary Special Bulletin, about terrorists who detonate a nuclear weapon, both aired in the spring of 1983, some polls showed that number rocket briefly above 70%. 70%! These days we can’t even get that many to agree that the President of the United States is Christian.

Not too surprisingly, a lot of science fiction from the era was preoccupied with tales of the apocalypse. The Cold War is long over, but those paperback treasures, with their morbidly imaginative visions of the end of the world and beyond, are still with us. You can find plenty of great anthologies with that theme very cheaply if you look (the ones I haven’t hoarded in my basement, anyway.) Today I want to look at three that I pulled out of my newly acquired collection: Robert Sheckley’s After the Fall (1980), H. Bruce Franklin’s Countdown to Midnight (1984), and Robert Silverberg’s New Dimensions 1.

Here’s the back covers for all three.

After the Fall was Robert Sheckley’s sole anthology. It collects all-new stories from Harry Harrison, Roger Zelazny, William F. Nolan, Thomas M. Disch, and many others. I bought a coverless copy long ago in a used bookstore in Ottawa, which meant that for the first few decades I owned this book its cover was the inside front page, with this enticing text:

Which is just what happens in this one-of-a-kind book of offbeat, upbeat Armageddons. The earth, and everyone on it, is annihilated — 15 times — by the masterful satiric pens of: ROBERT SHECKLEY: ROGER ZELAZNY: PHILIP JOSE FARMER: THOMAS DISCH, IAN WATSON, BOB SHAW (and others of like fevered mind).

Does the end of the world begin to sound like fun? It is — in the ULTIMATE “DISASTER” BOOK: 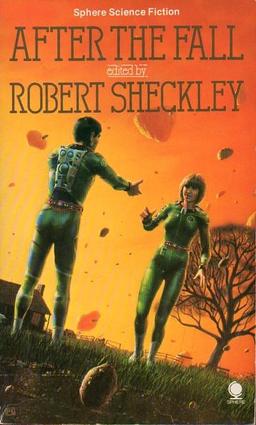 How can you resist a sell job like that? I know I couldn’t, cover or no cover.

Here’s the Table of Contents:

Introduction by Robert Sheckley
“The Last Days of (Parallel?) Earth” by Robert Sheckley
“The Day After the End of the World” by Harry Harrison
“A Very Good Year…” by Roger Zelazny
“Fire and/or Ice” by Roger Zelazny
“Exeunt Omnes” by Roger Zelazny
“Sungrab” by William F. Nolan
“Where Are You Now, Erik Scorbic?” by K. Copeland Shea
“Bud” by Ian Watson
“The Making of Revelation, Part I” by Philip José Farmer
“Rebecca Rubinstein’s Seventeenth Birthday” by Simon Gandolfi
“The Revelation” by Thomas M. Disch
“Nirvana Is a Nowhere Place” by Joel Schulman
“Heir” by J. A. Lawrence
“The Kingdom of O’Ryan” by Bob Shaw
“Just Another End of the World” by Maxim Jakubowski

After the Fall was published by Ace Books in September 1980. It is 212 pages, priced at $2.25 in paperback. The colorful cover is by Paul Alexander. It was reprinted by Sphere in the UK with a cover by Peter Elson (at right), but has not been reprinted since. There is no digital edition.

I’d never heard of H. Bruce Franklin, but according to his lengthy bio in Countdown to Midnight, he was the Distinguished Professor of English at Rutgers University, and the winner of the Pilgrim Award from the Science Fiction Research Association. His other anthologies include Future Perfect: American Science Fiction of the Nineteenth Century (1966), which has seen three revised editions.

Unlike After the Fall, Countdown to Midnight is a (mostly) reprint anthology, collecting such classic tales as Harlan Ellison’s “I Have No Mouth, and I Must Scream,” Judith Merril’s “That Only a Mother,” Theodore Sturgeon’s “Thunder and Roses,” and Ward Moore’s “Lot.” It contains one novella, Yeremey Parnov and Mikhail Yemtsev’s “Everything But Love,” translated from the Russian. The front cover promises:

Countdown to Midnight was published by DAW in December 1984. It is 287 pages, priced at $2.95. The cover is by Vincent di Fate. It has never been reprinted, and there is no digital edition.

Robert Silverberg’s New Dimensions 1 isn’t strictly an apocalyptic anthology per se…. but it does contain the first appearance of Gardner Dozois’ gloomy post-apocalyptic tale “A Special Kind of Morning” — not to mention Ursula K. Le Guin ‘s brilliant “Vaster Than Empires and More Slow,” and Harlan Ellison’s “At the Mouse Circus”… which could be about the apocalypse, you never know (since no one has any idea what that story is about, let’s go with that). 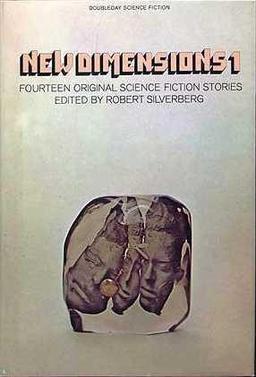 Introduction by Robert Silverberg
“A Special Kind of Morning” by Gardner Dozois
“The Trouble with the Past” by Alex Eisenstein and Phyllis Eisenstein
“The Power of Time” by Josephine Saxton
“The Giberel” by Doris Pitkin Buck
“Vaster Than Empires and More Slow” by Ursula K. Le Guin
“The Great A” by Robert C. Malstrom
“At the Mouse Circus” by Harlan Ellison
“A Plague of Cars” by Leonard Tushnet
“Sky” by R. A. Lafferty
“Love Song of Herself” by Edward Bryant
“The Wicked Flee” by Harry Harrison
“The Sliced-Crosswise Only-On-Tuesday World” by Philip José Farmer
“Conquest” by Barry N. Malzberg
“Emancipation: A Romance of the Times to Come” by Thomas M. Disch

New Dimensions 1 was very well received (ranked at #2 in the 1972 Locus poll for Best Original Anthology), and it was the first of a series that spawned 12 volumes between 1971-1981 (the last two co-edited with Marta Randall).

New Dimensions 1 was published in hardcover by Doubleday in 1971 with a cover by Nick Aristovulos (above right), and reprinted in paperback by Avon in August 1973. The paperback is 256 pages, priced at 95 cents. It has never been reprinted, and there is no digital edition. 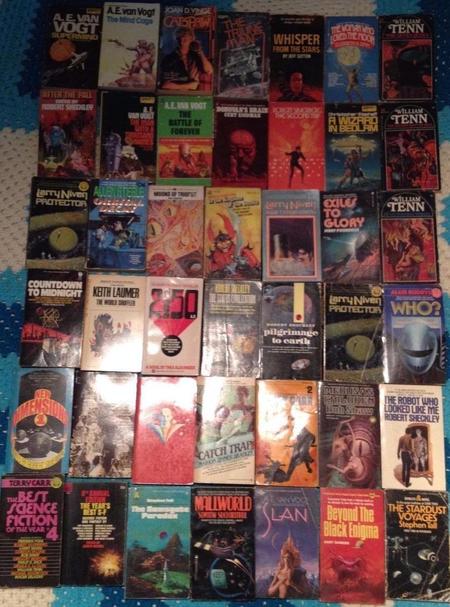 I bought all three of these books — and 39 others — in an eBay auction for $9.50, or about 25 cents per book (see above). I’m telling you, if you’re at all interested in these articles, and would like to sample some vintage treasures of your own, buying a collection is the way to go.

See all of our recent coverage of Vintage Treasures here.

The 13th New Dimensions was also assembled, by Randall alone. It was never published. It’s one of those near legendary anthologies, though not so much so as THE LAST DANGEROUS VISIONS. Its most famous story was Connie Willis’ searing “All My Darling Daughters”.

That first edition is a pretty damn good book … I liked Gardner’s story very much (it might be the first thing I read by him), and of course the Le Guin, but also Philip Jose Farmer’s story is very good.

That’s a hell of a deal you got on those books. Of course it fills me with despair at the yield I’d get if I ever tried to downsize my collection!

> The 13th New Dimensions was also assembled, by Randall alone.

Wow, I had no idea. Does it exist in any format anywhere, perhaps as an advance proof? How do you know about it?

> That’s a hell of a deal you got on those books. Of course it fills me with
> despair at the yield I’d get if I ever tried to downsize my collection!

There’s something of an art to selling collections on eBay. Books bundled by author tend to do MUCH better than just random collections. Also, condition is crucial… I got very lucky with this set, but you couldn’t really tell from the grainy photo. Photos that clearly show books in great shape get much better bids.

I’d read about it in a few places. There is, oddly enough, an Amazon entry, and an Alibris one, but both say “no copies available”.

The ISFDB says all copies were pulped except a few advance copies sent to reviewers. I don’t know who was in it except Connie Willis and Howard Waldrop.

Great score! Looks like a little bit of everything! Nice variety! And, the price was right!

Nuclear war almost seemed like a given in some of the fiction from the 50s-80s. I think that PKD’s “Do Androids Dream of Electric Sheep” takes place after a nuclear exchange.

A couple of really good books along the “day after” line are the classic “Canticle for Liebowitz” and “War Day”.

“War Day” really struck me as an impressive work– it was written in like 1982 about a limited nuclear war between the US and the USSR that happens in 1988, but it is set in 1998 and these two people (a writer and a reporter, I think) take a cross-country trip on the 10-year anniversary of the war-day to put together a book/report about the changes that have taken place.

One of the cool things they do in War Day is that they follow up on the idea of the EMP blast (the economy never quite recovers from all the money in electronic transfers that is simply gone, for example, and the damage to communications for another).

Fond memories of AFTER THE FALL, lots of giggles throughout.

“The Sliced-Crosswise, Only-on-Tuesday World” by Farmer, the start for his Dayworld books, nestled right in New Dimensions 1. Sigh. How I miss the original story anthologies of the Sixties and Seventies. We live in a wonderful time of periodicals publishing short fiction, but those original anthologies (Orbit, Universe, New Dimensions, Quark) always felt like Events when they put out a new volume.