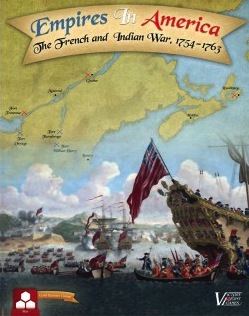 The second edition of a solitaire board game about the French and Indian War sits only a few feet away from me, and it’s all I can do to keep writing this review. I’d much rather be finishing the game, the seventh I’ve played this week since I received it Monday. You see, Wolfe is marching on Ticonderoga and Monro is heading for a fort I built in the Green Mountains. I’ve whittled both of their armies down, though, so the biggest threat is General Anherst, aided by the Royal Navy as he advances along the St. Lawrence Seaway.

I love this game. Maybe that shouldn’t be a surprise, seeing as how I really enjoyed the original edition. I wrote about Empires in America in some detail back in 2012 right here at Black Gate. Since then, the manufacturer Victory Point Games has made a number of production advances. (You may have seen my excited post about the quality of Nemo’s War in January.) Cards are made from professional card stock, and the counters — wow, the counters may be cardboard, but they were cut with a laser, and with their brown finish they look and even feel a little like they’re wooden.

Most everything’s been given an overhaul, including the map, packaging, and rules, although those familiar with the previous game will find the changes very minor.

Empires in America is designed by Joseph Miranda and is a States of Siege game. Like most of that line, enemy counters advance along predetermined tracks of from four to five spaces that converge on a single point that’s game over if the enemy conquers. In the case of Empires in America, there are five separate tracks, each with an enemy counter  representing an army. Depending upon which general’s card is associated with that counter, the size and strength of its army may be very different. For instance, when you draw the aforementioned General Anherst, he enters the board with 9 battalions, which is daunting even when you’re facing him with the best general the French can muster, Montcalm, who starts with 8 battalions. But you might luck out and face a British general commanding only 2 or 3 battalions.

General cards show more than strength. Some leaders are far more capable than others, or have special abilities (for instance Montcalm is capable of attacking twice in a turn) and all of them have a Reputation Track. If they’re victorious, their reputation grows and inspires their men so that they fight more capably. If a general’s defeated or if his reputation is brought too low, he can be sacked (or even, in one of several optional advanced rules, killed). 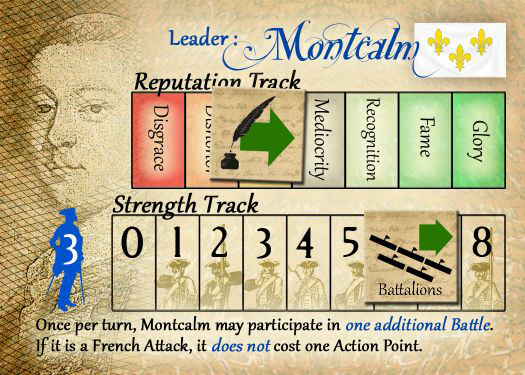 If a general’s sacked there’s a chance he can be dealt back into the game, because there’s a big deck of cards that adds random events, introduces new generals and auxiliary forces, changes card draws and generally provides even more interest.

I’m just scratching the surface in this description. There are a whole host of other factors to the game. When you have spare action points (determined by the number and capabilities of your generals) should you spend them to attack, to build forts (to slow the enemy advance) or to build trading posts, to improve your economy so you can afford reinforcements? Should you risk letting the enemy advance on one track so you have enough action points left to reinforce another general?

Yes, there are die rolls with every battle, and that with the card draws provides a random element. I’ve lost several games when the dice just refused to cooperate. But that’s what happens sometimes in warfare, too, when the enemy outfoxes your superior force. The random element ensures a different game every time you play, but you shouldn’t think you have no control. A skilled and clever player can win, although it’s a challenge. And that’s where the fun lies, and why I’m hoping when I finish writing this review I have time for a few more card draws. Can I beat the British this time and save New France? 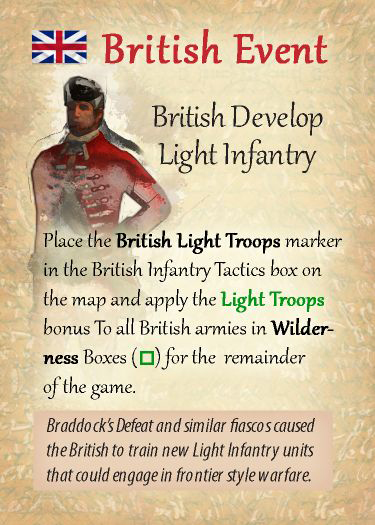 I appreciate this new improved version even more than I did the first, in part because I’ve played many more games since 2012 and understand and appreciate the “engine” a lot more. But even were I new to it I believe I’d see that Empires in America is, quite simply, a grand little game, and I think it will bring pleasure for years to come. Should I ever grow proficient at playing it, there are optional rules to make things even more challenging.

It retails for $32.99. The complexity level is moderate, meaning you’ll be referring to the rulebook frequently for the first few games. By the sixth, though, I found the rules intuitive enough I didn’t crack the rulebook anymore, and there are player aids on the map to help keep things streamlined. Playing time is listed as 50 minutes, but that must be for the truly experienced, for I’m just now starting to average about an hour and a half.

Two thumbs way up for this one. And while I have your attention, I should mention that Victory Point Game is running a sale through March 21st. One of the games for sale is Cruel Necessity, a sister product to Empires in America set at the time of the English Civil War. It’s had stellar reviews, and since I already have a copy on my game shelf I’ll try to bring you my own opinion of it soon… although probably not before the sale’s over!

Howard Andrew Jones is the author of the historical fantasy novels The Desert of Souls, and the The Bones of the Old Ones, as well as the related short story collection The Waters of Eternity, and the Paizo Pathfinder novels Beyond the Pool of Stars,  Plague of Shadows and  Stalking the Beast. You can keep up with him at his website, www.howardandrewjones.com, and follow him on Twitter or follow his occasional meanderings on Facebook.

[…] I spent so much time drafting a review of a great solitaire war game at Black Gate this morning that I don’t have time to spare for much of a blog post on my own site. If you have any interest in solitaire gaming, particularly at the strategic level, you ought to pick up Empires in America from Victory Point Games. Details are here. […]