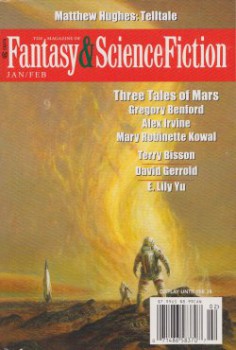 This past February was a weak month for new swords & sorcery short stories. In fact, I have only three stories to review: two, as usual, from Swords and Sorcery Magazine, and another from Fantasy and Science Fiction. It was a month, from a story reviewer’s perspective, that just fell into the gaps. Both Heroic Fantasy Quarterly and Grimdark Magazine published issues last month (reviewed here already), and Beneath Ceaseless Skies and Fantasy Scroll were bereft of anything that fit the bill. Any other periodicals that might possibly publish something that at least sort of qualifies as S&S were quiet as well. That’s okay, though. It lets me spend a little time explaining why I prefer heroic fantasy in short story form to novel.

Swords & sorcery is action seasoned with darkness, with only one or two protagonists. A S&S short story, by its very nature, is forced to focus on the action and the hero. There’s no room for protracted descriptions of feasts or lengthy discussions of magic systems. Done right, it’s all short, sharp, shock. What I’m looking for from S&S is a jolt of escapism and I find it best delivered in small, adrenaline-rich doses. Think of the greatest classic S&S characters: Conan (“Red Nails”), Jirel (“Black God’s Kiss”), Fafhrd and the Gray Mouser (“Bazaar of the Bizarre”), Kane (“Reflections for the Winter of My Soul”). Their greatest tales, their best remembered adventures, are in short stories, not novels.

From S&S I want crazy ideas and unflagging plot momentum, things that don’t always hold up for five hundred, let alone a thousand, pages. I want to see the world through one daring character’s eyes. The genre’s roots are in pulp fiction; the same melange of adventure and violence that gave rise to tough gumshoes and six gun-wearing cowboys. It’s simple (not simplistic) and direct: hard men and women doing hard things in a hard world. In S&S’s case, with monsters.

This doesn’t mean long form S&S isn’t good or can’t work. Of course it can. Robert E. Howard’s Hour of the Dragon and Michael Moorcock’s Stormbringer show how. It’s just that most long form fantasy tends to be about the epic, the world-endangering events, and the struggles of whole nations starring casts of dozens, not a single hero. It gives the author the room to build the world he or she wants from the ground up, and fill page after page with lovingly detailed descriptions of any and everything. And that’s great and good when done well, but it’s not what I want from S&S.

Anyhow, I’ve got three stories for review this month. The first is the excellent “Telltale” by Matthew Hughes in the January/February issue of Fantasy and Science Fiction. It’s yet another tale of Raffalon the thief (excuse me, Purloiner) and a job gone astray. I’ve reviewed several others for previous roundups and enjoyed them all.

During what seems to be a routine burglary, Raffalon is “surrounded by furious motion, tumbled, and flung a great distance.” When it stops he is stranded on a bleak, gray beach and quickly imprisoned by a group of villagers. They take him to a strange wood and release him into to it telling him

“You have been sent because you are a thief and there is in this forest a treasure to be stolen. Locate and seize the treasure, then find your way out, and you will be free and well rewarded.”

Nothing could sound simpler, but things are never simple for Hughes’ hero. The forest proves to be an inescapable maze and Raffalon finds himself forced to dredge up every tale and anecdote he can remember, even every event from his own life, in order to survive. The Raffalon stories are delightful gems that any fan of the off-kilter humor of Jack Vance’s Cugel the Clever or Michael Shea’s Nifft the Lean should enjoy.

The only other stories this month were the usual complement of two from Curtis Ellett’s Swords and Sorcery Magazine. Issue 49 kicks off the mag’s fifth year. Congratulations are definitely due Mr. Ellett for holding the genre’s banner high.

Unfortunately, the first story, “The Tale of Oscar and Taron” by Daniel Amatiello, is not successful. Two locals, the titular characters, are approached by an old woman who asks if she can secure a ride and escort to the royal capital where she is bound to serve as a nanny. The moments of menace and bouts of action are not engaging. The heroes are indistinguishable from one other and I never cared that they had a story to tell me. The nanny and her chaperone start and end as human ciphers. I appreciate what the author was going for, two fish-out-of-water commoners thrown into the big sea of events, but it didn’t work for me.

The magazine’s second story, Lynn Rushlau’s “The Garden of Dreamers” is much better at achieving its author’s goal, which apparently was to creep the everloving snot out of me.

The Garden of Dreamers belonged to the Visag, guardians of sleep and dreams. Anyone who sought an answer to any question might wind their way down the long spiraling stairs to the Garden, claim a resting place, and sleep until their Dreams revealed what they needed to know. The supplicants who came here might sleep for weeks, months, or years. And no one disturbed their Dreams. No one, not ever.

Until Lord Dregan hired assassins to kill the Queen and fled to the Garden rather than face the consequences.

A group of guardsman and their commander have been sent to the Garden of Dreamers on a mission. They must overcome the Garden’s servitors, and their fears, to capture their quarry. It’s very short with little plot, but it creates an intense atmosphere of unpleasant closeness I found perfectly unnerving.

That’s all for this month. I’ll try to do better next time and find more stories. Until then, keep on reading.

I’m surprised to see that Fantasy and Science Fiction published a sword and sorcery story. I have never sent a fantasy adventure story to them, thinking they would not print that kind of story. Now I know better! Thanks for the review, Fletcher!