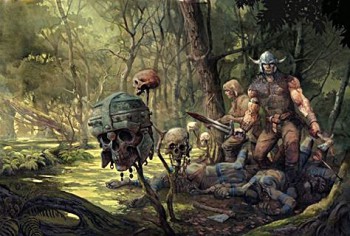 There’s a massively successful Conan Kickstarter wrapping up this week.

I’m a fan of Mongoose’s Conan RPG. It ran from 2004 through 2010, with over three dozen books between the 1st and 2nd Editions. It used the Open Game License. Well, dice rollers will once again be wreaking havoc throughout the Hyborian Age. Modiphius Games seems to have hit the jackpot with Robert E Howard’s Conan: Adventures in An Age Undreamed Of.

The base goal of $65,344 was to produce the Core Rulebook. As I type this, the KS is at $393,000. 13 stretch goals have been unlocked, adding 1 adventure book, 1 bestiary, 6 sourcebooks, 2 sets of geomorph tiles, 2 maps and double the art in the Core book. With the late surge successful Kickstarters inevitably get, I expect a few more items to be unlocked. There’s also a slew of add-ons (need a Conan backpack?) you can toss more money at, as well as stuff like a sourcebook tie-in to Monolith’s massively successful Conan board game. 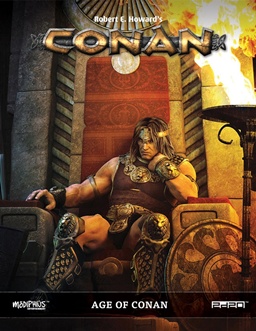 Jeffrey Shanks, who contributed this fine piece to our award-nominated Discovering Robert E. Howard series, is the Content Advisor and Art Director for the project. You can hear Jeff talk about the project in this interview. Modiphius has assembled a large team of writers and artists for this one. The RPG is ‘Conan Canon’ – it’s based on Howard’s original works. Not the movies, not Lin Carter’s redefining, not the Tor series. That’s exciting.

Conan uses Modiphius’ 2d20 system. Perhaps because it’s not the standard I’m used to, I find it kind of confusing. Now, I imagine somebody simply jumping into Pathfinder or the OGL would be a bit overwhelmed as well. But the 2d20 system is definitely different and would take some getting used to.

But if you’re willing to learn a new system and you are yearning to crush your enemies, to see them driven before you and to hear the lamentations of their women, this is your game. You can download a free Quickstart Guide, which includes a short adventure, to see what you think.

I highly recommend checking out the Quickstart Guide and then heading on over to the Kickstarter. There’s a lot of info on that page. The volume of content unlocked makes this a pretty attractive KS for the Conan fan.

Prior posts in our Discovering Robert E. Howard series include:

His “The Adventure of the Parson’s Son” is included in the largest collection of new Sherlock Holmes stories ever published. Surprisingly, they even let him back in for Volume IV!

I wonder if this breaks any records for RPG books on kickstarter. I know there are plenty of boardgames that have passed that up but i can’t recall any RPG books that have come close.

Glenn – I don’t know anything about the 7th Sea RPG, but a kickstarter to bring it back just wrapped up yesterday and raised over $1.3 million. That’s got to be the RPG standard.

I was wondering when this Kickstarter was going to get a mention here. I agree the system is a little weird (they recently posted a video animation that explains the combat system better, especially to those of us more used to D&D).

I’m excited about this RPG but my biggest complaint is the cost. It’s a pretty expensive RPG, especially given all the separate sourcebooks they have planned.

NOLAbert – Back when I started in with Pathfinder, I bought a couple of the hardbacks, but with the other Rulebooks only $9.99 in PDF format, I switched over. I’ve pretty much gone totally PDF since then.

I like the hard and soft covers, but it’s just too expensive to buy many of them. I never could have backed so many Frog God Games kickstarters if I hadn’t just gone PDF.

Which is a strength for the Conan KS (I’m still on the fence because of the system). That’s a LOT of sourcebooks for the PDF backer level!