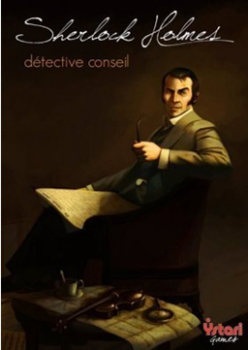 Last week, we talked about the Dungeons and Dragons Adventure Game line. Today, we shift to something a bit more in line with this column’s title. Back in 1981, Sleuth Publications produced Sherlock Holmes, Consulting Detective (SHCD). Expansions, containing additional cases followed and it was also turned in to a PC game. I never played any of these games. Which might make you wonder why I’m doing a post on it now. Well, if you’ve visited this column before, you know that I don’t let little things like that get in my way. However, I have played the 2015 reprint of SHCD and that’s what we’re looking at today.

In the game, you are one of the famed ‘Baker Street Irregulars,’ the ragged street urchins. I’ve read in reviews that you play Wiggins, but that’s not quite the case. But that makes no difference to the game: just wanted to point it out. Holmes is too busy (and presumably Watson is too clueless) to deal with some unsolved crimes, so he sends you (and Wiggins) out to do his job for him. Really, that’s what’s going on.

The game box contains five components. First is a very slender rulebook. There’s also a map of London with quadrant and building numbers. There is a London Directory that tells you where to find people and places on the map. This ID system ties back to the Casebook, which briefly describes the crime (this is where Holmes gives you your marching orders) and contains all the leads you will follow to try and solve the case. And there are some replica newspapers that contain mostly chaff, but there is also a little bit of wheat to be sorted out.

This game is about reading and note taking. If you’re not into both those activities, you can pass on SHCD. Trust me on this. There are ten separate Casebooks. and Case One is “The Munitions Magnate,” taking place on March 12, 1888. You are to find out who killed the head of a company involved in the arms trade. Ooh, rife with international intrigue!  Brings to mind ‘The Adventure of The Bruce Partington Plans.” You get some information in the setup, and then you decide what leads to follow. 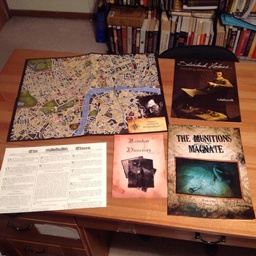 The leads are paragraphs of information that tie to locations on the map. For example, you sift through what Captain Egan of the Admiralty tells you and write useful bits down on a piece of paper. You can’t make bricks without clay, right? Then decide “where” to go next – meaning, what lead to follow. The map is mostly just for fun, though there may be a clue or two in it, so you can’t simply ignore it.

The date matters because there’s a newspaper for each case. And prior newspapers can be used in the current case. So, case two takes place on June 11, 1888. And the newspaper for that date, as well as the March 12, 1888 one (case one) are in play. However, the other newspaper can’t be used yet.

Eventually, when you think you know who did it, you go the back of the Casebook and answer some questions. You get points for correct answers, and you subtract points if you followed more leads than Holmes; or add points if you followed fewer leads. I’ve only played a couple of scenarios, but I don’t see how anybody is going to beat Holmes’ score. Of course, he’s a genius, but the inherent goal of the game is to do better than him. And that’s pretty much impossible.  For me, I simply toss that benchmark

That’s because this game is HARD. I’ve played case one twice and still not solved it. And I knew who did it the second time! It seems that even if you follow every lead (my son and I followed eight leads and identified the wrong killer the first time), you’ll need to make some serious leaps in logic and deduction. Perhaps future cases get easier, though I have my doubts.

One strength of this game is that it works solo. It’s listed as being for 1-8 players and I think for the fun factor, at least two is the way to go. For more than one person, a player picks one lead per turn and you progress through the case round robin. Of course, you’ve got the advantage of group discussion and analysis.

Personally, I don’t care what my score is. I just want to try and solve the crime correctly and look more like Holmes than Watson. Also, I’m one of those people who explores every side-quest and mission in RPGs. The faster you solve this game, with the fewest leads, the higher your score. But, the more of the game’s content you skip. And all of the leads entries are a big part of what you’re buying.

Visually, it’s a very attractive game, with the text all laid out in cursive and the rule and casebooks in a glossy finish. The atmosphere definitely feels Victorian, which is important to a Holmes game. Everything works easily and I didn’t really run into any confusion.

Of course, replayability is limited since you know the solution after the first play through. You could try it again to get it right, like I did. Less appealing (to me) would be replays to improve your score. Did I mention there’s a LOT of reading? You probably won’t finish a game in under an hour. With ten cases, you’re going to get a fair amount of game play from this one. And if you’re not going solo, the discussions and analysis should add to the value (and time).

The current publisher, Ystari, said on their website that they are planning on expansions by the end of the year. The original release had 14 additional cases, so they’ve got some existing product they could conceivably draw on. There’s also a fan-made custom pack that lets you create your own cases (in English and Italian!). I’ve already given some thought to adapting a Holmes tv episode for a new case.

Being a Holmes nut and somebody who loves to read, I like this game, though I suspect all the cases are going to be tough. My eight year old didn’t want to listen to all the leads read aloud, so I didn’t get a lot of help in the deduction area. He prefers 221B Baker Street, which is a similar yet simpler Holmes game.

Overall, it looks good, it definitely has a Holmes feel and it works solo. I’d give it three pipes on a scale of five.

His “The Adventure of the Parson’s Son” is included in the largest collection of new Sherlock Holmes stories ever published. Suprisingly, they even let him back in for Volume IV!

I recently picked this one up to try with the family. I haven’t gotten to it yet, but I found out that you might want to check out the game’s entry at Boardgamegeek.com.

Apparently there are a couple of problems with the 3rd and 6th cases. You can download a fan corrected version of case 3 from the games file section, along with a few additional cases translated from the French by fans. (Apparently the game’s been far more successful in France, Italy, and Spain than here, and there have been a number of additional cases that haven’t ever been officially released in English).

On the web site you also can find some fan created cases.

Hi Howard, I did check out BGG (great site!). That’s where I downloaded the Adventure Generator, though I’m not sure my home PC will be useful for that.

Played a few more games of 221B over the past week: it’s definitely easier than SHCD. Though not as ‘Holmes-like.’

R.K. – I’ve certainly got a whole lotta Holmes books. But I love board games, and I’d rather have a Holmes-themed one than modern day zombies or whatever.

But I know not everybody likes games.

My group of board game pals have been playing this game once or twice a year for over a decade now. We’ve worked our way through all the original expansion packs (the Mansion Murders, the West End Adventures, etc.) and are down to our last few cases. We love the game, although we can NEVER beat Sherlock (who always seems to solve the case in three or four moves.) It remains one of my absolute favorite games. The reissue is gorgeous to look at, but (as seems to be tradition with this game) typos are everywhere. I’d love to see new expansions. There’s also “Gumshoe” which was their hard-boiled detective version, and I just recently discovered that someone has self published a Lovecraftian supernatural detective version that I’m going to try to acquire.

I love the game. This a fantastic detective game as well. The intricate newspaper, the clues, the whole bit is amazing.

I’m really glad you reminded me about this. I have the old old version with the blue box. I should probably break it out.

Jeremy – I can’t imagine beating Holmes in 4 clues. That’s why I’ve already given up on that goal.

This is a good review, addressing both SHCD and Gumshoe (which fares poorly in comparison).

Ape – I missed a newspaper clue. Though it just would have reinforced my wrong deduction, as it was subplot related.

The new version does look very pretty, but the comments here are reinforced elsewhere on the web there are a lot of typos.

There’s a standalone expansion, with ten new cases, coming from Asmodee in February (2017).