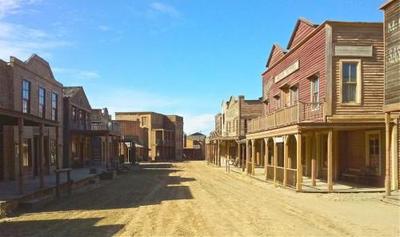 On Facebook yesterday editor Gardner Dozois theorized that the essential influence on modern Sword & Sorcery, which differentiates it from the classic pulp S&S of Robert E. Howard and Fritz Leiber, may be the Spaghetti Western.

While we’re talking about fantasy, I’ve been reading a lot of what’s being called “the New Sword & Sorcery” lately, stuff by people like Joe Abercrombie, Scott Lynch, K.J. Parker, Daniel Abraham, and it struck me what the one essential influence was that aesthetically separates the New Sword & Sorcery from the Old Sword & Sorcery, since both have sword-wielding adventurers, monsters, and evil magicians: it’s the Spaghetti Western. Clearly Spaghetti Westerns have had a big influence on the TONE of this new work. Gone are the gorgeous, jewel-encrusted temples stuffed with huge snakes and giant idols with jeweled eyes and slinky sinister priestesses in jeweled bikinis where Conan used to hang out. Instead, the most common setting seems to be a remote jerkwater village, either parched and sun-blasted or drizzling and half-buried in mud, extremely poor and mean, swarming with flies, packed with venal, dull-eyed, illiterate peasants who are barely smarter than morons, if they are, and who have no power or influence in the wider world, and certainly no money, and who stare blankly and slack-jawed at our heroes as they enter town, either kicking up clouds of dust at every step or splashing muddy water.

You know this place. Think of every degraded village in every Spaghetti Western you’ve ever seen.

I’m reminded of the ’84 David Carridine movie, ‘The Sword and the Sorceress’, a riff on ‘A Fistful of Dollars’ but in a sword and sorcery context. Not sure if the film was a complete success (I saw it around the year it came out, so my memories of it are pretty dim) but the idea was a good one.

Hmm. The link to the Facebook comment results in the following: “The link you followed may have expired, or the page may only be visible to an audience you’re not in.” 🙁

Huh. It’s possible Gardner has made this visible only to his friends. Is anyone else having difficulty with the link?

> I’m reminded of the ’84 David Carridine movie, ‘The Sword and the Sorceress’

I remember that movie fondly. A terrible film, really. But I sure enjoyed it when I first saw it.

Yeah, the link is not working for me as a non-facebook user.

I like the idea in theory, but I’d have to see some actual proof of the connection. Simple thematic/stylistic similarities don’t prove any real influence. Perhaps the inspiration for the crappy town model are the unsettled times we live in, just as the sixties were for the Italian Westerns.

While I like the filthy town setting and almost nihilistic cynicism, I really want the jewel-encrusted, giant-snake filled temples and slinky priestesses as well.

Understand what Dozios is getting at, but honestly, I prefer “the gorgeous, jewel-encrusted temples stuffed with huge snakes and giant idols with jeweled eyes and slinky sinister priestesses in jeweled bikinis” and wish there was more of it!

An interesting idea, and it may be true for the writers/novels listed. However, I think that in the short fiction world it is still pretty much anything goes.

That said, I also think that in the short fiction world there is a bit of a film-noir feel to some of the stories that we run, at Heroic Fantasy Quarterly at least. The overlap between Spaghetti Western and Noir may be pretty broad in a lot of cases.

Is there even such a thing as a New Sword & Sorcery? There’s frequent talk about Sword & Sorcery elements being found in many popular fantasy works, but gritty, low-magic fantasy isn’t the same thing.
I am indeed missing the giant jewels and the giant snakes, as well as the “gigantic melancholies and gigantic mirth”.

Though that’s not just an issue of Sword & Sorcery. Magic and wonder seems to be very much missing from most contemporary heroic fantasy.

I think Dozois’ main point is valid. It’s one more link in the Tarantino-ization of a lot of our popular culture.

@Adrian – thank you for writing that – I was just thinking about why I prefer S&S short fiction to novels these days, and that’s it. Too many of the novels feel constrained by what I imagine their authors believe the market demands of them, while the short story field has no such constraints.

@ Martin – great point. I see too much of contemporary hf as pretty mundane with a slathering of cynicism and a little dollop of sorcery on top, but little real magic and wonder.

John Fultz argued in Grimdark Magazine #4 that Grimdark Fantasy is today’s Sword and Sorcery, but I didn’t buy that argument. I think there is some relation between the two in terms of gritty scenes, but I’d argue that Grimdark fiction is more like Heroic Fantasy in that the events depicted usually have worldwide consequences.

For those of you who still prefer the massive, jeweled temples, the giant serpents and all the other stuff that traditionally made S&S great–including a whole lot of sorcery–for Crom’s sake check out SEVEN PRINCES, SEVEN KINGS, and SEVEN SORCERERS. Since Dozois ignores the presence of my trilogy in his piece, I’m forced to mention it here as an alternative to this “New S&S”–whatever that means.

Am I to take this as yet another sign that Gardner Dozois has started paying attention to fantasy? I recently renewed my subscription to Locus after several years. Much to my amazement, his column has had some non-derogatory words directed toward fantasy.

Some of the new sword and sorcery is what I call “Sword and Scatology.” There is an obsession with mucus, feces, pus, and urine often given great detail in description. Very prevalent in the anthology SWORDS & DARK MAGIC. Guess it is all part of what the author believes to be “keeping it real.’

Well,I need more “traditional” S&S. Not sold on this grimdark stuff. Gonna give that “Seven” trilogy a go; thanks for the tip John…

Bit of a personal eye opener. I suppose it never crossed my mind, but when I GM I do tend toward a more Sergio Leone style.

John is right. If we want to see more “oldschool” S&S, it is obvious what we have to do: We have to write it!

I can imagine that’s true, although I’m not sure that would be a good thing since, outside of Sergio Leone’s work and a handful of other films, the vast majority of spaghetti westerns are crap.

What about Hammett’s Red Harvest? As far as I can tell, Poisonville is the grandfather of the seedy towns in Spaghetti Westerns and samurai films; it also predates the rise of S&S, and maybe had an influence on it from the outset. Think of the iniquitous, strife-ridden cities in Red Nails or Xuthal of the Dusk, for instance, or the seedy towns in The Tower of the Elephant or Rogues in the House. Me, I think that bad neighborhoods and jeweled temples were both part of the DNA of S&S from the beginning.

The Zamoran cities somehow always had me thinking of 19th century London or early Chicago.

I suspect that if you want jeweled temples and giant snakes, there’s plenty to be found in RPG tie-in fiction.

Kurosawa agreed with you, Raphael – Yojimbo IS Red Harvest.

There’s a lot of overlap in Robert E. Howard’s work, especially the creation of Conan, and Hammett’s work, yes. They were both basically writing about the same stuff that was happening at the same time – boom towns in the western U.S. and the sort of riff-raff they attracted. Hammett told his stories in a fairly realistic way, but Howard transformed the oil towns into fantasy landscapes. IIRC Howard literally said this in one of his letters, that Conan was inspired by various men his family encountered while travelling through these towns.

SENSOR SWEEP: Joyful Abandon, the Notion of “The Crew”, Barely-Clad Damsels, and Sledgehammers to the Skull – castaliahouse.com