Over the last several weeks, a Canadian cadre of Black Gate‘s bloggers have formed an Alpha Flight of super-bloggers to right the wrongs of the world, especially where such wrongs take the form of you not knowing about every superhero TV show we can talk about.

This is going to be my last post in this huge comic event, and to cap off my contribution, I wanted to dig into the CW’s Arrow which has been running since 2012 and is into its fourth season. It has the same producers as The Flash and DC’s Legends of Tomorrow (also running on CW) and CBS’ Supergirl, and they occupy the same universe (multiverse in the case of Supergirl).

Green Arrow is not a new DC property, dating back to 1941. Green Arrow was a Robin Hood-themed character cast in the same mold as Batman, so much so that he also started as a millionaire, had a kid sidekick, and an Arrow Car and an Arrow-Plane.

In fact, there wasn’t much to separate him from Batman for much of his early years, which begs the question of, if you’re looking for Batman, why not just buy a Batman comic?

Denny O’Neill recast Green Arrow in partnership with Neal Adams in 1969 as a very politically lefty hero of the little guy, which made him the perfect thematic and moral foil for the galactic space cop Green Lantern in the background of the social changes of the 1960s.

The social commentary and mature subject matter got deeper with a number of issues, such as his sidekick having a heroin addiction (not a heroine addiction). O’Neill’s recasting has endured into today and Green Arrow has had a bunch of great comic runs under different creators.

The television show is therefore mining the best that DC has to offer in a 70-year history of this character. The Arrow show starts with Oliver Queen, billionaire’s son who’s been lost in the Pacific for 5 years.

He returns to Starling City with a mission given to him by his dying father, which is to set right the wrongs his father did as a corporate raider and industrialist.

As Oliver Queen, he’s swamped by personal problems from the beginning. His ex-girlfriend, Laurel Lance thinks he’s a bastard, because he cheated on her with her sister Sarah Lance.

His kid-sister is 17, and pissed off that he’s missed 5 years of her life. And as “The Vigilante,” the criminal world and the police are after him, because in season one, he’s really about slaying evil-doers.

But Oliver can’t do it all. He needs help. He coopts his own bodyguard (Digg, an ex-special forces NCO) into helping him, and then coopts a super-hacker and IT specialist from his own company (Felicity). Both are excellent foils to the dark, brooding, weight-of-the-world-on-his-shoulders. Digg holds him back and tempers his violence where he can, while Felicity is a bright spot in his gloomy, driven life.

But even this isn’t enough for all the challenges he faces. In season one, the big heavy is another ultra-rich industrialist who has been trained by the League of Assassins (remember Batman’s arch-nemesis R’as al Ghul?).

And in season two, he faces off against the man who trained him, Wilson Slade, Deathstroke. If a hero is measured by his villains, in each case, these two villains elevate the Arrow.

One of the things I find fascinating about Arrow is the tremendous variety of locale and plot and theme. This doesn’t just come from the Oliver Queen/Arrow split. Most episodes feature a strong secondary plot of Oliver on the North Pacific island where he was trapped for five years, and the horrific forces that shaped the hero he becomes.

I know my fellow blogger Marie Bilodeau has different views on this flashback structure, and threatened to run an anti-blog on the Arrow, but I think that for now, I’ve convinced her not to, Because I’m right.

So let me get to the red meat of this post: do I recommend Arrow? Absolutely. I’m not normally a TV watcher, but I binge-watched two seasons of Arrow in February and am about to start season three.

I’m loving the DC universe of TV shows. I believe that as good as Marvel is doing movies, DC is kicking ass at TV. And while I watch Supergirl, Flash and Legends of the Tomorrow with my son, Arrow is a show just for me (at least until he’s 14 or so). 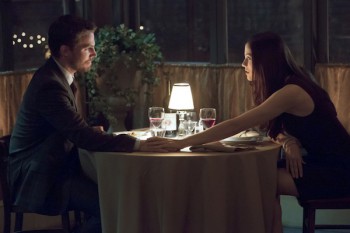 The show is gritty, dealing with drug dealers, corporate villainy, weapons traffickers and assassins. Nothing cosmic or world-shattering is happening here, unlike the other three shows I mentioned. This makes it very personal.

Stylistically, you get a huge fix of Batman-esque dark knight avenger vigilantism in every episode, with all the emotional and personal problems that come with someone trapped in the wild for five years and returned to find his city on the edge of being swallowed by the criminal abyss.

I say Batman-esque fully cognizant that you may ask yourself “Well, why the heck not just watch Batman?” Without irony, I would like to point out that there is no Batman TV (Warner is reserving Wonder Woman, Superman and Batman for the big screen). If you want a gritty superhero fix on TV, you’re probably already checking out Daredevil or Jessica Jones.

But each of those shows has a different concern, which leaves plenty of room to check out Arrow for that fix. I’m going to keep watching Arrow as my selfish TV fun, and I recommend you do too.

Our previous posts in the Superhero TV series were:

See all of our coverage of Movies & TV here.

Derek Künsken writes science fiction and fantasy in Gatineau, Québec. His latest space opera story will be on stands on the 29th of March in the April/May issue of Asimov’s Science Fiction Magazine.

“The Arrow. I’ve been told by the ladies that he is easy on the eyes.” I can affirm that my wife agrees with that assessment. 😉

I can partially agree with Marie Bilodeau about the flashback structure, in that during the first season it was my favorite part of the show, but over successive seasons it has gotten progressively sillier to the point that it’s now the most annoying part of the show.

The previous most annoying part of the show: The constant references to “this city.” If you made a drinking game regarding this phrase, you’d better make it every fifth instance of it being said, else you’ll die of alcohol poisoning within the first few episodes.

Also, Manu Bennett (Slade Wilson/Deathstroke, and currently starring as Allanon on The Shannara Chronicles) has one of the best voices in all of acting. I’d put him up there with Shohreh Aghdashloo in that regard.

I can affirm that my wife agrees with that assessment.

As does my wife, scars and all. She’s given up on the show, but that’s more due to Hulu than the show, as it was one of her favorites.

I couldn’t handle the lead’s wooden acting during season one and quickly gave up on it. My wife assures me there were reasons for that portrayal, and after the first season he was allowed to emote.

I did watch many of the flashback episodes in season one, which made for a great show in and of themselves. I think I quit when in season two (?) he confessed that he hadn’t spent all five years on the island.

Allen: Yeah, between Flash, Supergirl and Arrow, I’ve never seen more municipally-minded heroes. The focus on “my city” is distracting, but I’m good at filtering out small things.

Jeff: I didn’t notice the wooden acting and took the show on its terms. It may be a failing of mine.