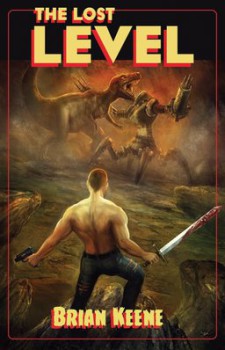 Lost worlds, pocket universes, dimensional traveling: these are things that warm my heart. Barsoom, the World of Tiers, and the Land of the Lost are places I want to see. A sword-swinging hero and warrior princess, well that’s pretty great by me. If your reactions are like mine then you are Brian Keene’s target audience for The Lost Level (2015), his love song to a certain kind of glorious pulp adventure that there aren’t enough of anymore. On the acknowledgements page he spells out explicitly the artists whose works helped inspire The Lost Level: Edgar Rice Burroughs, Robert E. Howard, Sid and Marty Krofft, Roy Thomas, Joe R. Lansdale, Mike Grell, John Eric Holmes, Karl Edward Wagner, Otis Adelbert Kline, Carlton Mellick III, and H.G. Wells. A tantalizing roll call of pulp genius. I am definitely this book’s target.

See that cover to the left? Even before I read a glowing review from Charles Rutledge, someone whose opinion I trust, that cover (by Kirsi Salonen) bellowed “BUY ME!” so loud and clear I knew I couldn’t hold out for long. Briefly, The Lost Level is the tale of a man from Earth lost in a different dimension, and his adventures alongside a warrior princess and a furry, blue alien. Now that I’ve read it… well, I really love the cover.

Brian Keene is best known as a prolific writer of gonzo horror (38 novels and 10 story collections over 13 years). His first novel, The Rising is credited with helping spark the current zombie craze, but I think it’s too good to merit the blame. I’ve only dipped a toe into his vast body of work but it’s been fun, if a little bloody. His established talent, coupled with that eye-popping cover, led me to have high hopes for the book.

Aaron Pace, son of a Methodist minister, bored with conventional religion, turned his eye toward mysticism. Moving from New Age books to true esoteric knowledge, he discovers the Labyrinth. It is a “dimensional shortcut through space and time,” that allows travel to other planets, dimensions, times, and more. By a combination of ritual, spiritual preparation, and incantations, he is soon making his way from one reality to another.

Pace also learned about the Lost Level — “a dimensional reality that existed apart from all the others, a place where the flotsam and jetsam of space and time occasionally washed up from across the shores of the multiverse.” Anything and everything from every other possible existence could be found there. The nasty bit about it is that once there you’re trapped, unable to escape and return home. And of course that’s where our hero finds himself, unarmed, unsupplied, and alone.

While a place of great beauty, the Lost Level is also filled with terror and horror. Within hours Pace learns just how deadly the place can be.

The injured animal thrashed, trying to escape, and the grass swayed, slicing at the deer. Each individual blade of grass was like a razor blade, and they moved in tandem, cutting through fur and flesh. Blood gushed out over the blades and into the dirt, vanishing as quickly as it spilled, slurped up by a thirsty network of roots beneath the soil. The deer shuddered and screamed as the grass rustled and writhed, slashing its abdomen open with a frightening, savage precision and delivering a mortal wound.

By this point I was sold on The Lost Level and I expected to stay sold for the rest of the way, but I didn’t. Once Pace rescues the warrior princess/cavegirl, Kasheena and Bloop, a furry, blue biped with fangs and a prehensile tail, the book goes astray. The journey they undertake to Kasheena’s village becomes too episodic and often unengaging. 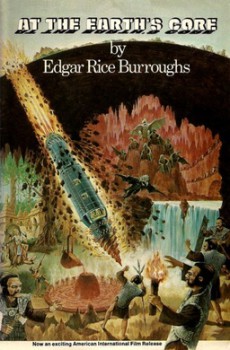 The companions lurch from one monster encounter to another, making discovery after momentous discovery of classic UFO or conspiracy lore, but never managing to come alive on the page. It reads like a greatest hits of the Lost Level, but there’s no depth to the story.

Except for some fanboy exclamations of geek culture, Pace’s tone is fairly flat — highly reminiscent of characters written by, say, Edgar Rice Burroughs. It makes sense in context, but it makes any sort of emotional connection to him and his predicament difficult. With one exception, his anger doesn’t read all that different from his happiness.

Another flaw of The Lost Level is its own existential conflict. Keene wants to give us a thick, delicious pulp cake of naked cavegirls, iron-muscled heroes, dinosaurs, ray guns, and robots, but iced with modern sensibilities. So Kasheena is a buxom, bare-chested warrior-princess who finds Pace sexually attractive and “chooses” to remain sexy, even after Pace gives her a history of Western sexism and women’s liberation. And for for all his geeky asides, Pace never becomes more than the square-jawed hero who is proficient with swords and guns. Bloop, deadly as he is with sword in hand (and tail), remains the comical sidekick. I’d have been happy with Keene having gone all-out pulp or completely contemporary. Ultimately, the two directions prove incohesive.

Several major events are only observed by Pace or recounted quickly and after the fact. The dino vs. robot battle on the cover demands to exist as a Ruby-Spears animated special, but it doesn’t involve Pace. Instead, we get it reported from a distance, lessening its intensity and immediacy. The novel’s end, brutal and epic, gets retold after the fact. The emotional blow it should carry becomes secondhand.

Now, despite everything I’ve just written, when the sequel, The Return to the Lost Level, makes its appearance, I will buy it. First, because I’m a sucker for this sort of story. Second, because for every misstep, Keene made two or three very good steps. He may have become famous as a purveyor of shocking horror, but here he shows that he can conjure up images of tremendous wonder and fanboyish delight. I will not give away a single one of these discoveries, but I can say that when the companions arrived in the Soft Valley my immediate reaction was to laugh. Instead I just marveled at Keene’s audacity and his ability to completely sell what should have been utterly ludicrous.

It’s the quieter moments of The Lost Level that are its most successful. Whether it’s Pace and Kasheena contemplating the mad nature of the Lost Level, or some bit of UFO lore brought to life, these are the where Keene’s story excels. His love for the genre is so evident and strong it’s contagious.

I wanted to love this book far more than I did. All the pieces needed to make this book great are present, but they didn’t coalesce into a story I could sink my teeth into. There are good, even great things in this book. Pace’s narration of events at the book’s end hint at some pretty great things to come, so I still have hope and am willing to follow along to see what happens next.

Fletcher Vredenburgh reviews here at Black Gate most Tuesday mornings and at his own site, Swords & Sorcery: A Blog when his muse hits him. You can read his last article here.

Too bad. I too love this kind of story, but though they look simple, like most simple appearing things they’re actually hard to do well.

I so much wanted to like this book more than I do. But, loads of folks love it, and there is some pretty terrific stuff in it, enough that I am going to read the sequel.