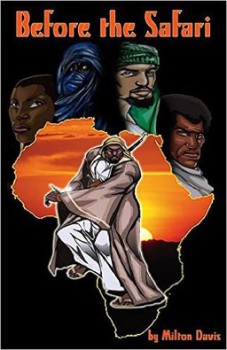 Remember swords & sorcery? You know, the wild, adventurous storytelling that brought most of us here together at Black Gate. I’ve put it on the back burner for the last couple of months, choosing instead to delve into epic high fantasy. But a few weeks ago I got a message from sword & soul impresario/writer/publisher Milton Davis, who wanted to know if I’d be interested in reading the new Changa collection, Before the Safari, pre-publication. Is Conan’s hair square-cut? Does Ningauble have seven eyes? Is Elric bad luck for his friends? Yes. There are a few perks to reviewing at Black Gate and this is one of them. (The hard copy won’t be hitting the shelves until July, but you can get the e-book right now).

Changa Diop, for those not familiar with him (and every self-respecting S&S fan should be by now), was once a prince of the Bakongo people, but his father was overthrown and killed by the sorcerer Usenge. In the original collections, Changa’s Safari 1, 2, and 3 (reviewed by me and Joe Bonandonna), we learned that Changa eventually ended up enslaved and forced to fight in gladiatorial combat. He was rescued from his bloody life by the Swahili Belay. A merchant, Belay taught Changa his trade and eventually made him heir in preference to his own sons.

The three Safari books tell of Changa’s great adventure as he takes his merchant fleet from 14th century Sofala, in present day Mozambique, across the Indian Ocean to China and back again. If you have the slightest interest in old school S&S, these are right up your alley. Changa Diop is an adventurer of heroic proportions and deeds, worthy of standing alongside any of the S&S greats. Constantly pushed to his limits, he faces off against demons, pirates, evil sorcerers, and monsters — lots and lots of monsters.

If you have read them, if you have come to know and love Changa and his companions, then the latest book is for you. As the title reads, its stories are set in the years before Changa’s great journey to the Middle Kingdom. In other words, it’s an origin story.

It’s Changa’s story, but it’s also that of his friends. One of the aspects that sets Davis’ hero apart from many of his heroic brethren and sistren is he is not a man alone. Surrounding him is a host of other characters as well as the crews of his ships, for whom he holds himself responsible. That setup is a far different thing than the solitary Conan or Kane, wandering the Earth in search of the next score. Changa moves through life encircled by a family, even if it’s a created one. In Before the Safari we witness the members of that family starting to come together. To quote myself, from the review of Safari 2:

As skilled as he is, Changa’s success is not won alone. The comrades with whom he surrounds himself are each skilled and memorable in their own ways. Foremost is the blue-robed and silent swordsman known only as the Tuareg; Zakee is a young Yemeni prince rescued from a disastrous marriage; the irascible navigator Mikaili is an Ethiopian with plans to become a priest someday…just never today; and finally there is Panya, Yoruban sorceress and beloved of Changa.

In “The Promise” we learn the circumstances under which Changa fled his home after his father’s murder, and in “Oya’s Daughter” how Panya escaped a very bad marriage and became a servant of a goddess. Amenokal Sirrocco’s fall, and rise as the mighty blue-robed Tuareg, begins in “El Sirocco” and ends with “Mbogo Returns,” when he is rescued from the same slave-fighting pits to which Changa was once condemned. Mikaili’s derailment on the road to priesthood occurs with his capture and adventure among a crew of pirates in “The Sea Priest.” Finally, noble prince Zakee’s adventure, “The Devil’s Lair,” ends only days before the opening of the first volume of Changa’s Safari.

There are also several stories about Changa as he takes over Belay’s business, and as he finds himself face to face with numerous foes, natural and supernatural. By his last adventure in this book, “The Gate,” Changa is a man to be reckoned with, and one prepared for the great safari to China in the other books.

Every story is a solid, glorious hunk of swords & sorcery, and each one a discrete adventure that moves its protagonist forward to the time when he’ll meet his future companions. Watching characters we’ve come to love as a company venture and struggle on their own is a lot of fun.

I like the Changa stories for many reasons. There’s the African setting, the fact that Changa’s a businessman and not just a freebooter or mercenary, and Davis’ tremendous storytelling skills. I like that they hew to the spirit of classic S&S, weaving adventure and horror together and placing it in a vividly described, exotic world. But what really gets me, what I remember most when I’ve put down a Davis book, are the monsters. Milton Davis creates monsters to be remembered.

In “The Promise,” clawed and fanged gorillas fall from a vast thundercloud. Blind troglodytes raid villagers for captives to serve up to a vampiric giant in “Walaji Damu (The Blood Drinkers).” In “Mwanamke Tembo (The Elephant Woman),” an ivory hunt brings Changa up against spectral elephants and a goddess:

Changa emerged from the tree line and stumbled. A ragged vanguard of tembos advanced on the camp. But these beasts were like nothing he’d ever seen.

Bleached bones showed through their translucent hides, their trunks ghostly extensions from their heads. They followed the largest tembo, a massive matriarch whose trunk emitted the eerie blast cutting through the humid night. Astride her was a woman. Tribal patterns laced her face, lines that glowed with the spectral light of the herd. The tembo rider held a massive shoka (axe) in her left hand. She waved while screaming a sound similar to the matriarch. 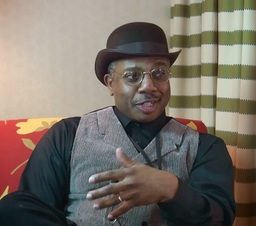 In this present age of giant books and never-ending stories, Changa Diop is something of a throwback. He exists in only in short stories, that form most suited for S&S. Taken together, these stories tell the wild and exciting saga of a bold hero, and are brimming with pirates, demons, wicked sorceresses, and all manner of foul enemies. If you haven’t read the previous books, do yourself a favor and get them. Then get Before the Safari. The stories actually benefit from already having a sense of who the characters are, while the later books (chronologically) benefit from some of the mystery surrounding their origins.

Oh, and Davis is also working on an animated short, “Changa and the Jade Obelisk.” You can go read about it and see a promo clip here.

I enjoyed Changa’s Safari. I have one other in the series in the que but I’ve neglected it. This story sounds very good and I’ll probably pick it up. I wish Milton Davis would wend his way to Texas for a book signing.

I love Saunders and Imaro of course. Saunders uses a mythical African world and Davis uses an Africa set here.

Thank you Fletch. I’ll fire up my Kindle and get it soon.

Sounds really cool. I haven’t read Milton Davis yet, but I think I’ll have to change that soon.

It is cool. The two Griots collections he’s edited with Charles Saunders are very good as well.