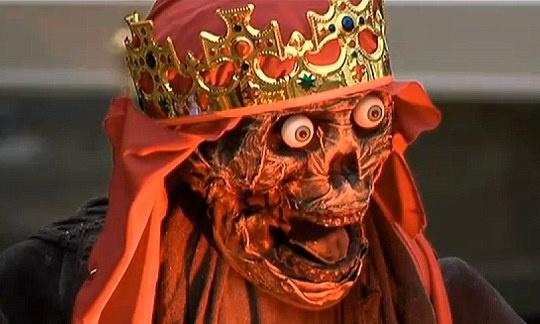 A citation for a zoning violation is expected to be issued to a local homeowner, for a zombie nativity scene in Sycamore Township, OH, in an attempt to force its removal.

According to Cincinnati.com, Jasen Dixon is facing citations upwards of $500 per day as city leaders are labeling Dixon’s nativity scene an “accessory building” per Sycamore Zoning Administrator Harry Holbert.

Basically, what it boils down to is that per local laws, accessory buildings cannot be taller than 5 feet, and Dixon’s scene reaches 15 feet at its peak. Holbert also states that an application was submitted but was denied.

Dixon’s unique nativity first captured the attention of people around the globe in December 2014.  It also caught the attention of township leadership resulting in a warning for a zoning violation for the size of the accessory structure in which the zombie nativity figures were displayed.

The nativity was removed before citation was issued. 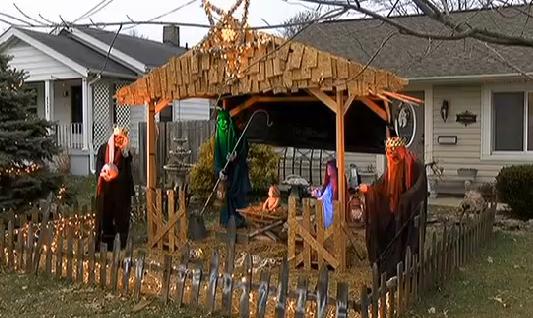 Looking to avoid a similar situation this year, in early November Dixon began exchanging emails with Sycamore Zoning Administrator Harry Holbert. Last year’s structure exceeded 200 square feet, Dixon said, but this year it’s under 70 square feet. He went on to state that according to Hamilton County building codes, if the floor area of a structure does not exceed 200 square feet, then it’s in compliance.

Holbert said that Dixon did submit an application on Dec. 1 to build an accessory structure in his front yard, which was denied on Dec. 2. The township’s zoning resolution prohibits accessory structures in the front or side yard, he said.

I actually looked up the ordinances in Sycamore Township which point to the definition of an “accessory building” being a permanent structure, such as a toolshed or dog kennel.  There are no guidelines addressing a temporary structure. The very nature of a nativity scene is that it goes up for the holidays and then comes down afterwards, a.k.a. “temporary.”

If you lived in Sycamore Township and had a party in your yard (though that now seems highly unlikely) and put up a tent, would you then have to get a permit for an “accessory building”?

I reached out to the Zombie Anti-Defamation League for comment only to discover they had expired… literally.

So what do you think?  A small, unincorporated township in America’s heartland simply protecting its (property) values?  Or a vindictive attack on the freedom of expression of a zombie advocate?

PS:  I found Jasen on Facebook and learned he’s an artist.  If you really want an entertaining read, check out some of the posts by people who find his nativity scene offensive.

Actually GC I think it looks they just finished a cooking/home improvement reality tv marathon. I know because I looked like that guy at the top after three episodes of Flip or Flop.

It could also be the aftermath of a city council or PTA meeting. The three “wise men” could easily pass for my own city council. Just swap that sheppard stick with a gavel and you’ll see what I mean.

Ape, I heartily approve of your interpretation. Those zombies look about the way I feel after trying to get the house ready for the holidays.

I read some of the comments this guy’s been getting. Wow. Anybody who objects to the Zombie Nativity on the grounds that it offends Christians does not then get to complain about PC oversensitivity. Or rather, they get to complain about it, and then everybody around them gets to call them on their hypocrisy, out loud and frequently.

Reminds me of the first television dialog the censors had an issue with:

“Ward, don’t you think you were a little hard on the Beaver…?”